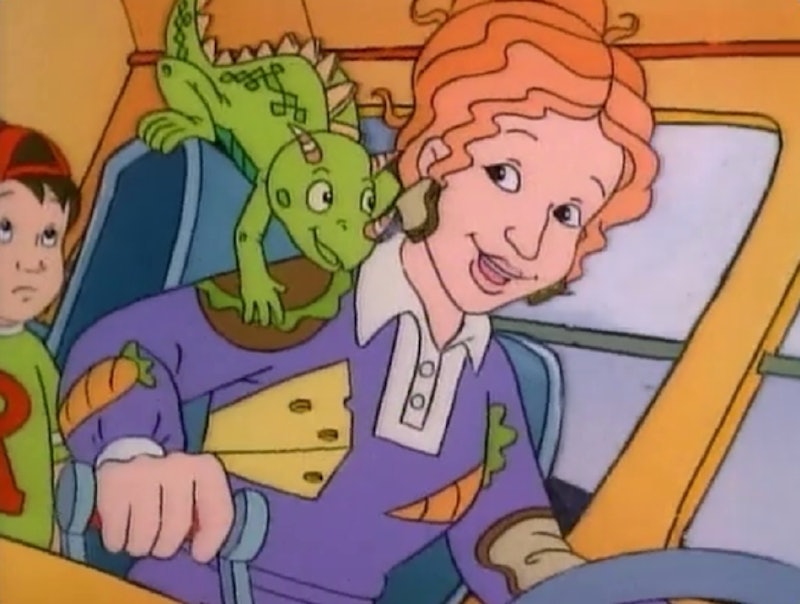 I know this may sound like crazy talk, but trust me, the show had layers. When you were a kid it was all out of this world field trips and catchy catch phrases, but did you understand why the show was so important? Did you realize how epic the woman who voiced Miss Frizzle was? Did you really pay attention to the kinds of lessons Miss Frizzle was dishing out? Prepare to reevaluate everything you thought you knew about The Magic School Bus, and somehow end up loving it even more. (Yes, that is possible.)

So buckle up, friends, and let's take a field trip to the land of '90s nostalgia to see all the cool things you totally didn't appreciate about The Magic School Bus the first time around.

1. A Big Part Of Miss Frizzle's Awesomeness Is Owed To Lily Tomlin

If you knew who Tomlin was when you were a kid, then you deserve all the cool points. I know I didn't put any thought into who was voicing the Frizz, but knowing Tomlin is a proud feminist and groundbreaking comedian explains the character's innate appeal.

2. Diversity Was Emphasized In The Class Because The Show Was Trying To Make STEM Subjects Accessible To Everyone

Even in the '90s, girls and non-white students were less likely to pursue STEM subjects after a certain age. The Magic School Bus featured a diverse class to prove these subjects were accessible to everyone.

3. Miss Frizzle's Earrings Were As Magical As Her Bus

Remember how Miss Frizzle's earrings glowed before every field trip? Yeah, they were definitely magical. This visual cue didn't mean much to you when you were a kid, but it opens up plenty of questions about the nature of Miss Frizzle's powers now that you've watched six seasons of Lost.

4. The Field Trips Were Often Inspired By Classic Sci-Fi/Horror Movies

Attack of the 50 Foot Woman, Spins a Web, Fantastic Voyage, Dracula — they all served as pop culture inspiration for episodes that went on to explore science topics.

5. The Theme Song Was Catchy For A Very Important Reason

Little Richard sang the theme song, which explains why you could never get it out of your head.

6. "Goes Upstream" Was Probably Your First Brush With Sex Ed

In retrospect, that little episode about salmon migration included a fairly graphic fertilization scene. And just think, this show was parent and teacher approved!

You could always trust the lessons you learned on The Magic School Bus, right? Not so much. Now you know science is ever evolving and many of Miss Frizzle's "facts" have been disproved. Rest in peace, Pluto.

8. The Show Was Super Feminist

All those science lessons came with a large side of feminism. You probably didn't notice it then, but the show was majorly progressive in the way it depicted equality among the students. Miss Frizzle herself is basically a feminist icon, and Arnold's Aunt Arizona was the show's version of Indiana Jones.

Outside of Hollywood, not many kids know what a producer is, but that didn't stop The Magic School Bus from using a "producer" to discuss episode inaccuracies or the more complex processes left out of certain episodes. Watching it now, you can totally appreciate the meta nature of it all, but back then the segment was more than a little weird.

10. "Out Of This World" Was A Love Letter To Star Trek

Yes, the space based outing "Out of This World" was a full on Star Trek homage complete with Liz as Spock. You want to go rewatch that episode right now, don't you?

11. The Show Was All About Demystifying "Scary" Things Via Science

Most of the field trips involved one or more of the kids (usually Arnold) being terrified by something they didn't understand. By delving into the science of swamps, spiders, and bats, the show revealed how education is the perfect antidote to fear. In other words, you got schooled by the Frizz and as a result turned out to be a well-rounded human being. You should definitely send PBS a thank-you note.

The next time you settle in for a Netflix Magic School Bus binge remember all the ways you can appreciate the show even more now that you are an adult. Trust me, your appreciation of Miss Frizzle's lessons will only grow.