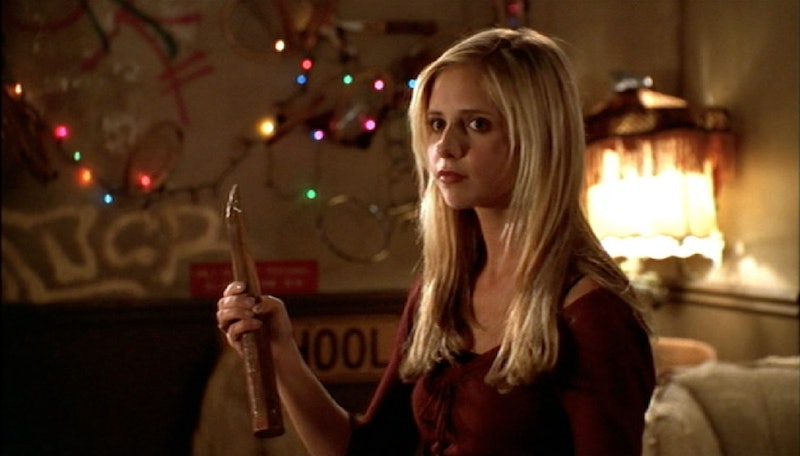 When you were a young person and people asked what you wanted to be when you "grew up", did you respond with a fictional female TV character from the '90s? I’ll give you a second to remember. No? Just me? OK, that's fine. BUT, I think you would be seriously lying to my face if you told me you didn't think about it at all. That you never had dreams of waking up five years down the line as, say — I don’t know, Buffy Summers. Hey, you’d have even “settled” for Buffy's right-hand woman, Willow Rosenberg (though that wouldn't have really been settling because we all know Willow was a badass too).

That’s right, I did just bring this all back around to the ‘90s. Because if you grew up during this decade, then there was no way you weren’t emotionally invested/borderline-obsessed with the kind of female characters on TV back then. There were so many impressive women on every channel, it’s actually hard to narrow this list down. Nonetheless, here’s my best effort at compiling 11 '90s female TV characters you wanted to be when you grew up. And hey, you mightn’t have turned into any of these ladies or woken up one day as them, but I'd be willing to bet they still helped shape you into becoming the kind of person you grew up into anyway.

Speaking of Buffy, might as well start off with the best. Buffy wasn’t afraid to stand up to anyone. Just because she was a blonde cheerleader didn’t mean that she couldn’t take down a bad guy or, I don't know, save humanity.

Clarissa was the everywoman. She technically wasn't the coolest girl at school, but she had enough style and sass to hold her own amongst anyone. She was down to earth, smart, and had a totally enviable sense of self.

Body positive, self-aware, articulate: Topanga had all the things you’d hope to gain from growing up. (And by that I mean all those aforementioned attributes plus great hair.)

Was there anyone who had a more envious life than Alex Mack? (Guys. She turned into a silver puddle.) Homegirl had telekinetic powers, could shoot zappy things out of her fingers, and disappear whenever. She also had excellent taste in hats.

5 AND 6. Tia And Tamera Campbell

These sisters were a rare form of hilarious and kind. They also had their own minds and did their own styles in their own times.

Stephanie's gal pal Gia was just way too cool. She was totally bad news and encouraged Stephanie to do crazy things (like attend a make out party! or smoke!), but come on. We all wanted to be as confident and laid back as Gia.

Lindsay was the girl that could hang in every circle. At the same time, she was loyal to her friends and family. She was also super smart and not ashamed of her intelligence.

Moore was such a force to be reckoned with. She was practical and a total realist, but also artsy and casually cool.

Has any other character so embraced her sardonic and nerdy side like Daria? She had a quip for everything. In Daria's own words, she wasn't negative. She was edgy.

Scully was such a boss. With her unwavering sense of independence and fierceness, Scully inspired us all to be our own kind of heroes.

Our younger, idolizing selves might not be stoked to learn that we didn't turn into any of these woman, but I think they'd be happy to hear we still look up to them.