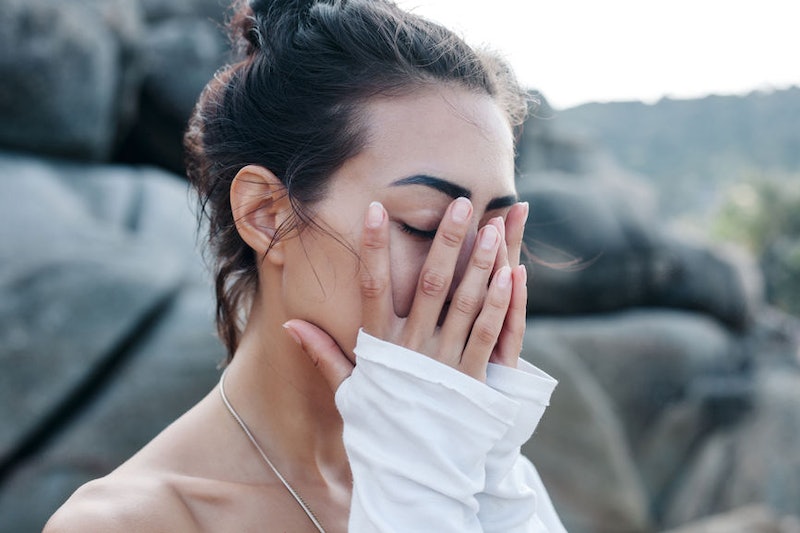 The other night I actually experienced this weird symptom of PMS for myself — I already knew that I was PMSing, and I was in a foul mood. All of the sudden, I was overtaken by a need to organize my room and clean. Everything in my apartment suddenly looked cluttered to me, and I felt an impulse to get rid of a bunch of my stuff. At the same time, I was overcome by an urge to bake — and I did, in between doing loads of laundry. Save for the baking, this kind of domestic outburst is unusual for me; it's an urge that only happens, well, once or twice a month. You might think I was just trying to distract myself from my bad mood, but science says there is actually a hormonal reason for all this: when you're PMSing, you are often overcome by an urge to clean house — literally and figuratively.

Why? The answer lies in the way estrogen and progesterone levels affect your brain. Before our periods, our estrogen levels drop — causing serotonin levels to drop right along with it. As you probably know, low serotonin levels are behind a host of issues like depression, anxiety, and OCD, which is why those illnesses are often treated with serotonin reuptake inhibitors (SSRIs), drugs that try to get those serotonin levels higher.

This hormonally-induced serotonin dip before our periods can leave those of us who are already prone to depression feeling extra sad, or even particularly negative about our bodies when we're PMSing. But that drop in serotonin can also make you feel a little obsessive and compulsive before your period.

But the drops in estrogen and serotonin aren't the only things that spur the desire to clean up. Before your period, your progesterone levels also drop, which combines the impulse to clean with an instinct to "nest." We see this tendency manifest itself more dramatically in pregnant women, who in their later months of pregnancy have low progesterone levels — which often lead them to go into a frenzy of cleaning house and nesting in order to prepare for the baby.

The PMS-related drop in progesterone is a less-intense version of the same phenomenon. In her fascinating book, Moody Bitches , Dr. Julie Holland explains why this happens: "Every month, when your body prepares for a possible embryo implantation, progesterone levels are building and causing a smaller form of nesting," she writes. "Toward the end of the cycle, a woman might become dissatisfied with her environment and obsessive about making changes in order to make sure the setting is appropriate next month for the burrowing of the embryo into the uterine lining."

"When estrogen levels drop before our periods, that veil is lifted ... It's time to clean house."

Of course, these changes are much more pronounced (and potentially only noticeable) when you're not on hormonal birth control, so don't expect to see these shifts in mood and behavior if you're taking it. But for those of us who don't use hormonal birth control and feel overcome by an urge to throw out all our old shoes once a month, this is some seriously useful information: when our estrogen drops, our attitude towards our homes, and our lives in general, may shift.

"A good way to think of estrogen is as the 'whatever you want honey' hormone. Estrogen creates a veil of accommodation," Dr. Holland writes. "When estrogen levels drop before our periods, that veil is lifted ... It's time to clean house."

Because higher levels of estrogen have made you more adaptable and accommodating the first two weeks of the month, it can feel like you're seeing all the dust in your life at once when you're PMSing. But the potentially productive thing about PMS, and lower moods in general? You have to be able to see the dirt in order to know where to clean.

Dr. Holland believes that women should use the feeling of restless dissatisfaction, and trust it, rather than writing themselves off as "crazy" or "moody" right before their periods. "The thoughts and feelings that come up during this phase of your cycle are real; the are genuine. If you're feeling overwhelmed or underappreciated, that you're taking on more than your partner, or that things are out of balance, chances are it's all true," Dr. Holland writes. "PMS is a time of psychological inventory, to take stock and make sure you are where you want to be in your life ... Pay attention to that critical eye, to those judgmental thoughts. They are probably more valid than you'd like to believe, and I bet they are actionable."

I tried to take her advice this month — and ended up with a reorganized apartment, as well as a super-productive conversation with my partner about some little things I felt were being swept under the rug. Fascinatingly, Dr. Holland suggests that women could even benefit from trying to plan their tasks for the month around where they'll be in their cycle.

You can plan to take on more challenging assignments at the beginning of your cycle right after your period, when your resilence is higher. The peak estrogen levels seen towards the middle of your cycle mean improvement of verbal and fine motor skills, so plan your business presentations and sewing projects for that time of the month. You should definitely leave the tasks best suited to someone with OCD, like cleaning out your closets, for during the PMS part of your cycle. Also, your pain tolerance is at its lowest point during PMS. Not a great time to go to the dentist or get waxed.

Obviously, we don't want to plan our entire lives around our hormonal shifts — nor could we. But understanding where your different moods are coming from every month is important. At the very least, being aware of this can help you know what to expect. And in my organized premenstrual state right now, I rather like that idea.