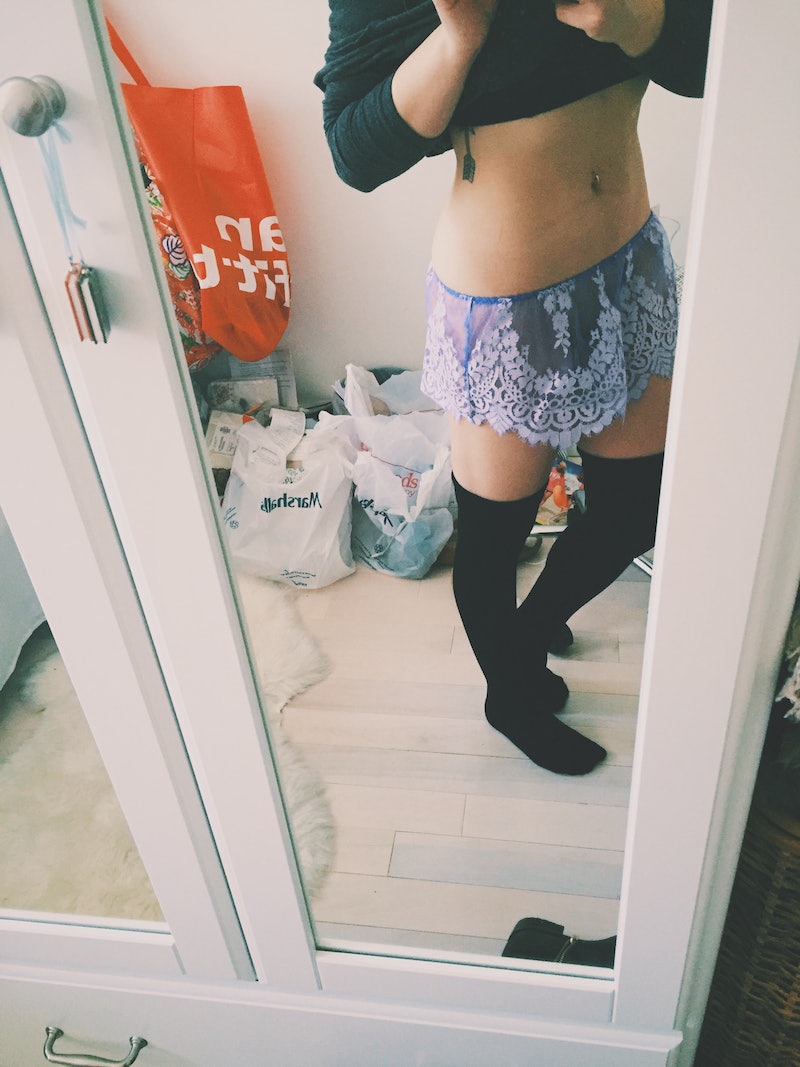 When it comes to choosing your underwear, there are a weird amount of things to consider. Especially for something that's not really seen for the majority of the day, it's crazy to imagine how varied the prices can get. Just how much more magical can those $200 pair of panties be than your equally-as-cute $5 lace boy shorts? Will those undies that were spun from the finest silk, intricately crocheted for a year, and blessed three times over from the fancy underwear gods really give your bottom that indescribable experience to push you to conquer the day? I figured it was about time I found out.

For this experiment, I wanted to go about it from a practical and functional perspective, so I decided to rule out the sexy lingerie. Lingerie is a little more rooted in the aesthetic and a different type of undergarment experiment altogether. And since lingerie wouldn't necessarily be something you'd wear every day, I stuck with the classic bikinis, hipsters, thongs, and granny panties.

Now when it comes to my underthings, I aim to spend a reasonable amount of money on quality, comfort, and aesthetic appeal. For an all-around average pair, (again, excluding lingerie), the max I'd go is about $15. So far it's worked for me comfort-wise, and those pairs have lasted me a decent amount of time and weren't destroyed after the first wash.

So for a week, I alternated days going both lower and higher than my usual underwear price range. Here's what happened.

In my quest for the pricier panties, I first paid a visit to an old friend that's been with me since the beginning of my awkward undergarment high school days — Victoria's Secret. I wanted to see what they had going on other than their nifty little 2 for $25 deals that I usually flock to. I asked one of the associates what the most expensive pair they carried at the moment was.

To my surprise, one of the pairs that the young woman brought me looked nothing like the form-fitting, extravagant lace undies I had already started picturing in my head. Instead, she showed me these, with which I obviously had to start my experiment...

These were some sort of cross between makeshift sleep shorts, decked-out Granny panties, and those Elizabethan puffy pants the dudes used to wear. Just a bit of a resemblance, don't you think?

Putting them on, I wasn't quite sure if I was supposed to hike them up or let them hang low from my waistline. These were a size small, but they felt super big and airy. I decided the most fitting outfit to wear these with would be a high-waisted skirt because anything else would have made it look like something very strange was happening in my pants.

Actually, aside from the fact that they were so big, it didn't really feel like I was wearing anything. When I could feel the material on my skin, it felt nice and the elastic didn't pinch me and leave any marks. These should be worn with either a skirt or a dress, though; they bunched up in all the weird places when I tried them on with a pair of jeans.

Turns out, I did have a few older pairs stashed away from previous hasty purchases, which have mostly become my designated safety period underwear. Well yeah OK, except for these white ones. I can't remember where they came from, and I honestly rarely wear them. But, for the purposes of this experiment, I decided to pull them out again.

Channeling those Calvin Klein vibes with a cheap ass underwear mirror selfie? I figured I'd wear these with my boyfriend jeans. And while seamless underwear is supposed to look and feel like you aren't wearing anything, these were a slightly different story. The cut was a little off, which made the front part ride up my V at super uncomfortable moments throughout the day. Especially because these boyfriend jeans are a looser fit, this allowed that front part to move around as it pleased. I was reminded of why these remained at the bottom of my drawer among the emergency pairs. I was so looking forward to what was to hopefully be a more comfortable day with tomorrow's expensive pair.

I threw them out, by the way.

This was the second pair that the woman at Victoria's Secret brought out for me. Way closer to what I was expecting when I first asked, although I was a little surprised that this was the most expensive pair of underwear they carried. Apparently, they had some pair during the holidays that ran for a hefty $70, but year-round, their pricier normal underwear averages to about $25. (Again, not counting their lingerie ensembles.)

At first glance, with all the frills and lace and weird strappy things adorning the panties, I was a little worried this would be bad news for my bottom all day. I threw on these baggier pants just for comfort's sake and set forth on my Tuesday. In my experience with busy underwear like this pair, all sorts of wedgies and chafing and bizarre pinching in places I never even thought about would occur. But this time, I've got to say that the material was super soothing on my skin and the cut was just right — so no lace, sequins, and straps riding up my bum either.

I'm pretty sure I also found this pair in some discounted bin in the checkout aisle of some store as a last minute bargain-buy. Cause ya know, they looked nice and they were so cheap. Ugh. No. Never again. It was difficult to feel any sort of sexy when I constantly had to readjust them and do the uncomfortable-underwear-dance. You know the one I'm talking about.

I guess this was another one of those pairs that I had stashed away and never really thought about because while wearing them, I have no idea why I held onto them for this long. They gave me a massive wedgie that never went away, and I could literally feel the cheap quality of the lace because I was itching like crazy by midday. At least juxtaposed with the nicer pair I wore the day before, I felt a dramatic difference.

Like seamless panties, thongs are my usual go-to for more activewear/tighter pants as they give off the same no-underwear effect. But these cheap little knickers made themselves very known with every damn movement I made. It was awkward to crouch down, sit, and just walk like a respectable human, as I had a wad of lace obnoxiously making its way into all sorts of unwanted areas down there.

So as I was heading out of Victoria's Secret with my two new panties, on the prowl for a ridiculously over-priced purchase, I caught sight of a little shop a little further down Fifth Avenue in New York City. Though advertised as London lingerie stylists, I figured I'd give Rigby & Peller a try to see what they could offer a girl pretending she had money to spend on a normal, slightly more expensive pair of undies. Upon entering the store, I was immediately greeted by Morgan, one of the lingerie stylists, who was super enthused to tell me all she knew about the different brands they carried... which was a lot.

She ushered me from section to section of the store, showing me everything from the $200 pairs to the $15 sale items. Of the more expensive pairs, she certainly had beautiful things to say in terms of the process and care put into crafting them. From graphic lace to glossy piping to specific temperatures required — I definitely left the store with a newfound respect for the art of lingerie. Because it really is an art. I finally settled on these Stella McCartney bikini briefs, as they seemed a more realistic choice for something I would wear for the day.

Unlike the day before's horror story panties, these fit nice and snug and felt great to move around in. I paired them with my black skinny jeans to put them to the ultimate test. The smooth piece in the front made for a super luxurious feel and the lace in the back cushioned my booty very lovingly.

Thumbs up for the crouch-test. I'd even go so far as to say that these would do just as well for more activewear. If I wasn't worried about maintaining them and keeping them spiffy, that is.

Cheap Seamless Hipsters — a new pop-punk band? At any rate, these Puma hipsters were the bomb dot com. When paying me a little visit, my mother unloaded a Santa sacks-worth of Costco goodies after one of her many warehouse shopping sprees. Among these treasures was this nifty 3-pack of Puma underwear. Bless my mother, Costco, and its food samples for always having my back. Or in this case, my bum.

These were so comfortable and just as a seamless pair of underwear should be. I wore these looser olive-green pants, and while I was running around the office all day, I felt more weightless and pixie-like than my girl Tinkerbell ever could. They were snug, didn't reveal any lines, and stayed put in both the front and back — totally wedgie-free and wonderful. Once again, my mother and Costco came through with these bargain deals.

OK, so this was a pair that happened to be a gift because, as mentioned, I just would never spend this amount of money on normal underwear. I was visiting family in Spain, and a close family friend of ours had come back from Paris and casually bought us ladies a pair of designer underwear each. As one does, right? When I found out how much they approximately cost, I was way too paranoid to wear them. I felt like I had to stow them away in some glass display case, as they'd fall apart with one touch of my reckless fingers.

So anyway, I pulled them out from my "special" drawer for those "special" occasions — wink wink — and decided to pair 'dem triple figure panties with some white denim. After going a week fluctuating between cheap and expensive and comfortable and uncomfortable, these weren't anything out-of-this-world, considering the price. They certainly felt sleek and sexy and all that, but the little bows in the back made for a bit of an irritating feeling by the end of the day. I was relieved to take them off; I think I'll keep saving them for those "special" occasions.

Price doesn't always dictate quality. As proven by the cheap pair of Puma panties, cheaper underwear can look and feel just as amazing as the pricier pairs. Having said that, it's always good to do a little research and take extra care reading those labels to ensure that you are buying decent quality. Underwear is not something I'd advise buying "just any old kind," especially after this little experiment comparing those very different pairs day by day.

Pamper yo booty, but don't be fooled by the bigger digits.

More like this
These Bras & Underwear Seem Expensive But Are Actually Cheap AF On Amazon
By Nicole Zane
35 Cheap Tricks Stylists Say Make Your Outfits Look Chicer & More Expensive
By Nicole Zane
You'll Wear These Cheap, Comfy Bras & Underwear So Much You'll Wish You Got Them Sooner
By Sara Brown-Rigoli
An Ode To The Balm That Keeps My Hayfever At Bay
By Jessica Morgan
Get Even More From Bustle — Sign Up For The Newsletter