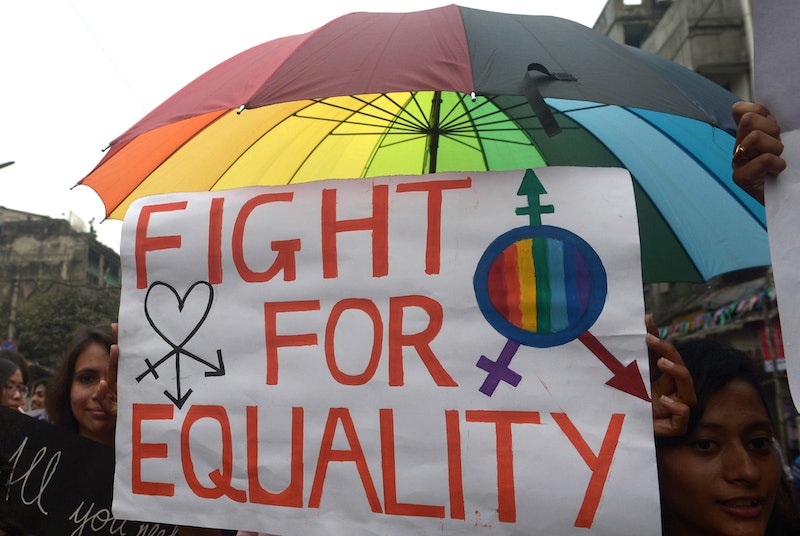 There is not a single doubt that both popular opinion and legislation regarding LGBTQ rights in the United States has progressed throughout the history of this country, becoming more tolerant, inclusive, and accepting of something that was once considered taboo. But the legalization of same sex marriage and queer integration into the mainstream doesn't mean that all is well; in fact, there's a lot of work left to do, especially when it comes to queer women in the workplace.

A New York University study published in January of 2016 found that, in a nutshell, queer women were less likely to get a job interview than straight women. The author of the study, Emma Mishel, created two fictitious resumés which detailed different but similar qualifications for two different women. (The fictious women were assigned common white names, as to not conflate other forms of discrimination with discrimination based on sexual orientation.) Both women shared the following qualifications: College graduates (from Cornell and Columbia), a few years of relevant work experience, study abroad experience, and high grade point averages. The only difference in the resumés was that one had a secretarial position at her university's LGBTQ organization, while the other had no such experience or any affiliation with an LGBTQ organization or cause.

Mishel's study isn't the first to examine LGBTQ discrimination in the job application process; in 2010, John Bailey did a resumé audit where he tried to find if gay men and lesbian women were discriminated against disproportionately when applying to jobs. His results were surprisingly different than Mishel's, however: His study found no discrimination in the workplace based on sexual orientation. But Mishel notes in her discussion of experiment design that Baily's results might have something to do with his selection of test cities — he used Philadelphia, Chicago, Dallas, and San Francisco, all areas with thriving queer populations and generally areas that politically align with the left (with the possible exception of Dallas).

For her study, Mishel sent out more than 1,600 resumés over a three-month period to administrative positions in New York, Virginia, Tennessee, and Washington, D.C., regions Mishel chose carefully because they accurately represent the diverse makeup of the United States. Here are some things that happened:

1. The Straight Applicant Got More Callbacks Than the Queer Applicant

Of the 775 resumés that were sent on behalf of each fictitious woman, the straight applicant got 130 callbacks, while the queer applicant got 94 callbacks — that's a five percent difference.

2. Proportionally, the Queer Applicant Got Fewest Callbacks from Tennessee and Washington, D.C.

There was about a seven percent different in the callbacks the applicants received from places of employment in D.C. and Tennessee. This number is surprisingly high if we keep in mind the fact that the resumés were virtually identical; the only noticeable difference was one that highlighted a position at an LGBTQ organization.

3. In Virginia, the Queer Applicant Actually Got More Callbacks

There is good in the world! In Virginia, a state which doesn't have protection against hate crimes based on gender identity or sexuality, the queer applicant got three more total callbacks than her straight counterpart. Both sent 212 resumés in Virginia, so the difference is about one percent.

4. Places Perceived to Be "Gay Friendly" Didn't Actually Seem That Way at All

Washington, D.C. and New York, both considered inclusive and queer-friendly spaces, had institutions that clearly discriminated when looking at the two resumés. One myth this study debunked effectively is that the existence of LGBTQ legislation in a state doesn't necessarily mean discrimination doesn't exist in important spaces.

This study, overall, shows us the importance of incorporating and encouraging equality and diversity in all aspects of life. Granting people the right to marry does not mean its ok to make cuts in other areas such as employment, especially when employment creates stability and livelihood. We have to do better.

For more, check out the full study online here.