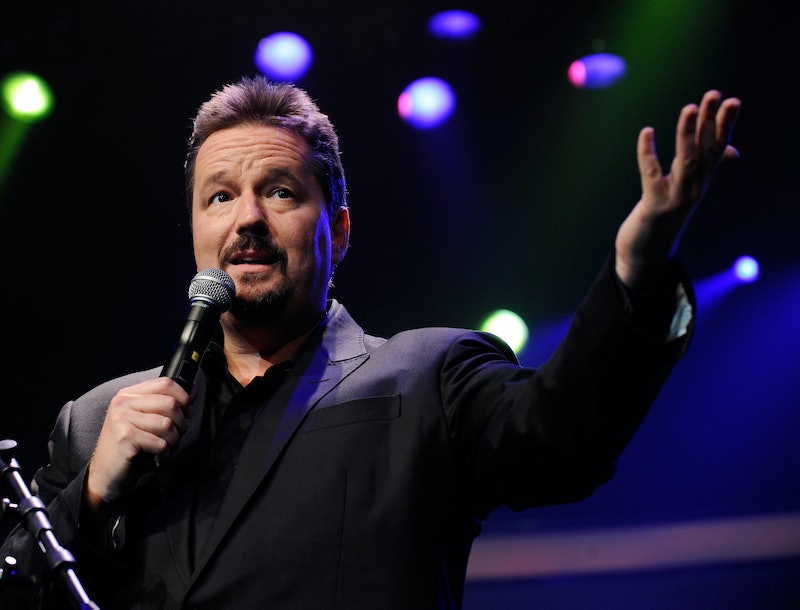 According to episode previews, on Monday, The Bachelor is headed to Las Vegas, and the contestants will find themselves taking center stage with Terry Fator. According to the Las Vegas Sun, the featured headliner invited 12 of the ladies to join him and Ben Higgins on the Mirage stage where he regularly performs. "It was great. I got to coach them on their hidden showbiz talents and prepare them to perform onstage in front of my audience for Ben," Fator told the newspaper. Serving as an opening act to a successful Vegas headliner probably wasn't what any of the ladies had in mind when they were preparing for their group date, but it is The Bachelor after all! Fans wouldn't ask for it any other way. So, what exactly is the Terry Fator show? The Bachelor ladies really got thrown for a loop on this one!

According to his website, Fator is a jack of all trades when it comes to the perfect Vegas act. He is a comedian, ventriloquist, singer, and celebrity impersonator. All he is really missing from his performance is a couple of tigers and a flaming hoop for them to jump through. If the name sounds a little familiar to you, he was the winner of Season 2 of America's Got Talent. His win came back in 2007, and he has since secured his spot as a headliner at the Mirage in Vegas. He is known to do both vocal and musical impressions of superstars like Lady Gaga and Garth Brooks and peppers his show with hilarious banter between his many puppets with various unique personalities. With an act like his to be inspired by, I'm sure the ladies of The Bachelor will have a few hilarious tricks up their sleeve.

Until then, here are some of Fator's most notable and beloved puppet friends that join him on stage and may be spotted on Monday night.

Winston is known as the show's "star" and is the puppet that helped win America's Got Talent for Fator.

According to Fator's website, Rusty does impersonations like Elvis, Garth Brooks, and Bruno Mars. He's a relatively newer addition to the show.

According to Fator's site, Wrex is a crash test dummy. He's probably one of the most well-known puppets Fator has.

Vikki is a hilarious cougar character that is always on the prowl for young rich men to seduce, according to Fator's website.

Fator's website says that he is an Elvis impersonator who doesn't actually know any Elvis songs. Brilliant.

This puppet is a country singer who is running for president, according to Fator's site.

Catch Fator and his puppets Monday night when Ben's ladies have to display their own funny talents.