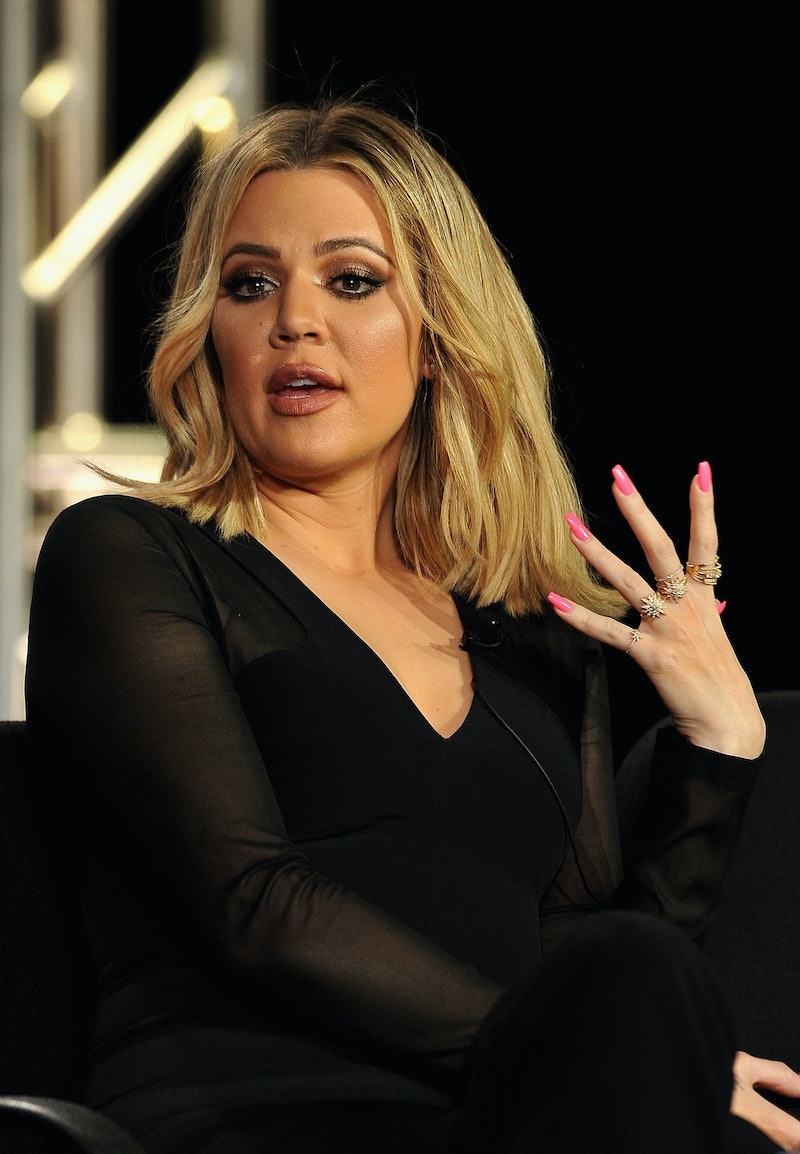 As soon as news broke that Rob Kardashian and Blac Chyna may be together, I practically dropped my phone in shock. For a slew of reasons, this would be mind-blowing. To start, Blac Chyna is the ex of Tyga, aka Kylie Jenner's boyfriend, which previously led to some heated comments about Kylie from Chyna's BFF Amber Rose. Not to mention Rob recently had a major health scare when he was rushed to the hospital and diagnosed with diabetes. How would he even have time to go out and date? Further complicating the whole situation, Khloé Kardashian inadvertently threw herself in the middle when a cryptic tweet was mistaken as a dig at Rob and Chyna. Claiming she was quoting The Godfather, Khloé wrote,

You can do anything. But never go against the family

Based on the timing, Twitter users figured this was a reference to Rob. Nope, the Kocktails With Khloé host clarified her post was about a relative bailing on her talk show and reminded everyone that she has numerous family members ("about 100," according to her hilarious exaggeration). But then, Khloé seemingly responded to the whole Rob situation afterward, saying,

But hey, maybe my quote can go towards a few people today.

Interesting, huh? She added, "Well now I know what all my family members are doing lol. Thanks Twitter." This implies that the 31-year-old is just as shocked as everyone else to hear this Rob and Chyna dating news, which E! News says they can confirm is true.

According to E! News, those close with Rob are concerned about this possible pairing. The site reports:

A source tells us that there is "concern" surrounding the pairing because the insider feels that she is "preying" on Rob "during a weak time." The source is also concerned that she is only using him to get back at Kylie Jenner.

My main question here is that if there is such concern about the potential relationship, wouldn't that mean Khloé knew before people told her on Twitter? Plus, considering she still lives with Rob, I imagine she'd be well aware if he was hanging out with anyone. Unless, of course, he secretly hangs out at Chyna's house. Honestly, the whole situation is just pretty confusing and complicated.

On the other hand, if Khloé's surprise over the romance rumors is actually genuine, it would make a lot of sense. Considering she's spoken out about how Rob is finally working on himself, a new relationship could be a distraction from channeling his energy into getting better. In a recent Good Morning America interview, Khloé talked about supporting Rob's healthy journey. She said,

He got out [of the hospital] before the New Year, so I was like, "OK, let's leave all that stuff then. Listen, you found out what the problem is. Let's tackle it head on." Everything happens for a reason, so that health scare, if that's going to shake him up a little bit and jumpstart his health journey, great. I'm right here for him.

Considering he's so focused on his health, it seems out of the blue to bring a relationship in to the equation. In her November 2015 book Strong Looks Better Naked, Khloé described how serious Rob's struggle was, writing, "I love and him and he knows I love him, but he fell into a deep, dark place and couldn’t find his way back." It would make sense that she really is rooting for him to get better and avoid falling back into that dark place.

Basically, my conclusion here is that if Khloé is as shocked as her tweet lets on, it's coming from a genuine place of concern related to wanting her brother's life back on track. Since there's a history of drama between her family and Chyna, this doesn't sound like the best route to go. But of course, Rob is an adult who can do what he wants. I guess fans will just have to wait and see what happens next.