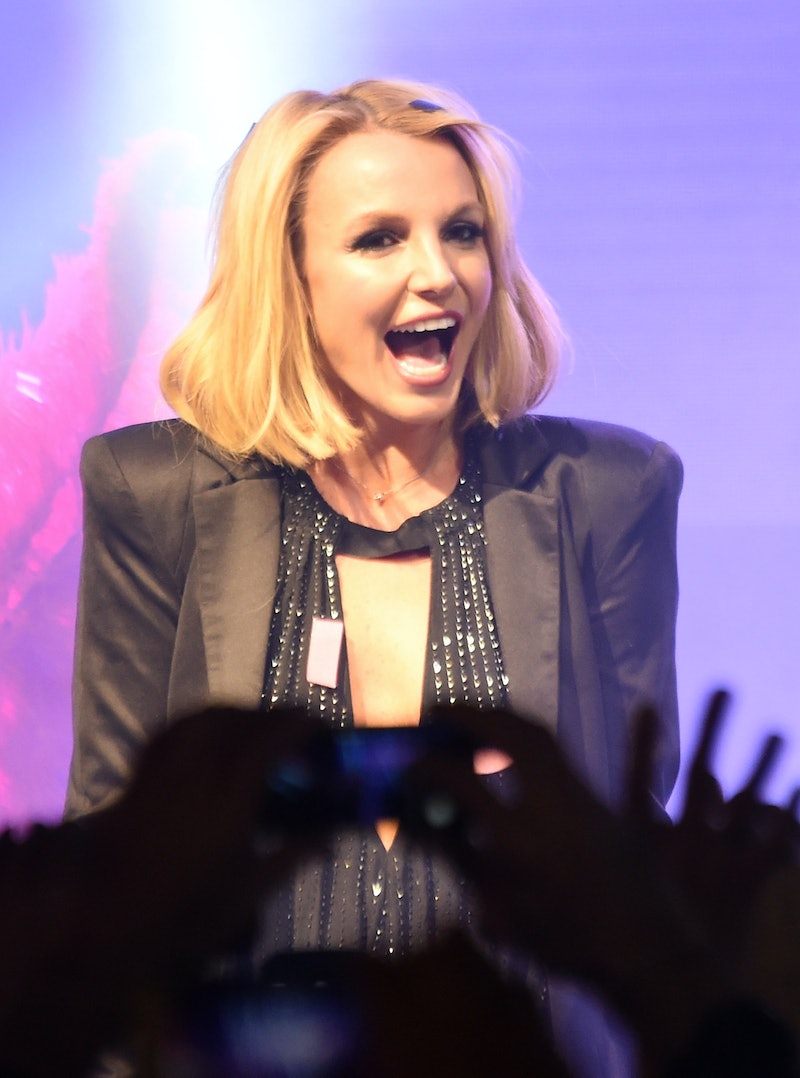 Britney Spears seems to be really comfortable with her fame right now, especially following the announcement that her Las Vegas residency has been extended for another two years, and she continues to embrace her fans via social media. Not only is Britney Spears's Instagram consistently so on point (who could forget that time she posted a photo of some corn that she found on Google and pretended she was eating it?), it gives us a personal glimpse into the life of a megastar. It might be difficult to understand where Spears is coming from sometimes, but that only convinces me that she's a bona fide genius. Which is why it should be no surprise that she posted three new video clips on Instagram and they've got me wondering if Spears is releasing a new music video in 2016. They're certainly hinting at something big.

While there has been a lot of speculation recently that Spears will soon be releasing a new album, nothing has yet materialized. These first glimpses of the "Toxic" singer in what could be a music video have understandably got fans very, very excited. Should we all be preparing ourselves for the imminent release of new Britney Spears music, or are the black and white video clips, which feature Spears wearing a bikini and flipping her hair for the camera, for her Las Vegas show or perhaps the promotion of another product?

Perhaps most importantly, all three of these clips feature the same song in the background. Alas, it is not a new Spears track, but "S.O.B." by Nathaniel Rateliff & The Night Sweats. This choice of track is particularly interesting because of its lyrics: "Now for seventeen years I've been throwing them back. Seventeen more will bury me." And these lyrics are sneakily meaningful when paired with clips of Britney doing her thing, because — brace yourself — 2016 marks the 17th anniversary of "Baby One More Time." Seventeen years is an awful long time to have been in the music industry, and still be as popular as Spears is, and as these video clips prove, she is definitely getting her image and career back on track.

But, aside from marking a very special anniversary, these clips on Spears' Instagram could hint at something else. Unfortunately, Spears isn't helping us solve this could-be puzzle: She remains silent on the topic. In fact, Spears doesn't seem to lend much significance to the videos at all, going about her day like nothing has even happened. Case and point: Her next Instagram post was a photo of a shoe:

With the announcement of Spears' latest perfume, Maui Fantasy, it's also possible that the clips could be part of an advertisement or promotional campaign for the product launch. After all, on the Maui Fantasy perfume art work, the 34-year-old is also wearing a bikini, so it's not out of the question that these two things are related. Another fan theory is that the videos have been made for Spears' Las Vegas show.

Is this tease actually part of a genius plan? Or are we all just desperate enough to take every little thing she does as a sign of hope that Britney is soon to be back in a big way? The truth will come out soon enough, and if we're lucky, it will come in the form of a brand new music video.