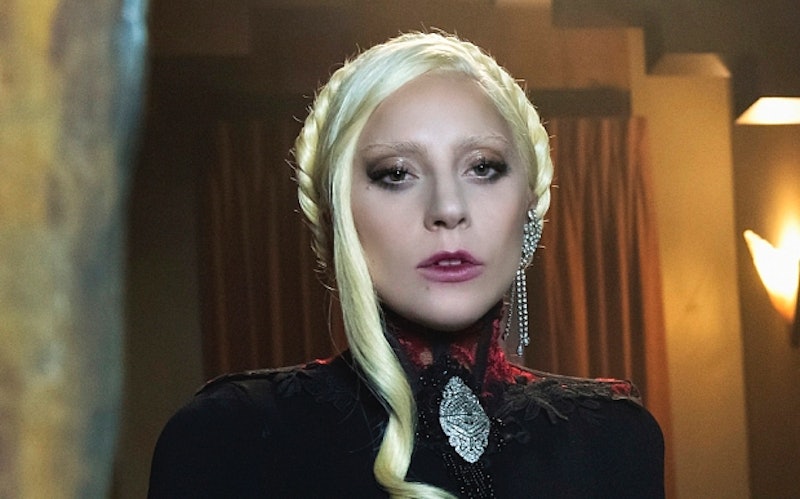 It’s been a hell of a vacation (seriously) but American Horror Story: Hotel has finally ended. By now you've now checked out and hopefully enjoyed your stay at the Hotel. But aside from recapping the previous seasons ad nauseum and rewatching them like a billion times on Netflix because you just can't get enough, what are you supposed to do until the next American Horror Story season debuts? Well, luckily I percolated some theories for A merican Horror Story Season 6 to keep your mind occupied during this very trying time.

Because every season starts fresh — new plot, new characters, new setting, and sometimes even new actors — we have to wonder how the next installment will reinvent its actors... and, of course, its characters. Things are usually wrapped up pretty tightly under lock and key while we wait in between seasons, but we all can at least brainstorm what’s to come this time around. Will American Horror Story get nautical on us? Or, will it take us to a galaxy far, far away?

Here are just a few theories of what we could possibly expect from American Horror Story Season 6, with me judging it’s actual plausibility (or reinforcing how much I really want this to be a thing).

1. The Next Season Arc Will Center Around A Cruise Ship

I love this idea. It has a lot of the same anxieties connected to Hotel but in the middle of the ocean. You all saw what went down in Titanic — that situation is about an iceberg away from total chaos (and, ooooh, they could actually have some Titanic references if they so choose). I don't know if there's any true validity to this theory beyond wishful thinking on Reddit, though, and like, some enthusiastic Photoshopping.

2. The Next Season Arc Will Center Around A Boarding School

Without tiptoeing into spoiler territory, this theory is broached because of the mention of a "Thatcher School" in the finale, and a vague suggestion that this could be the place we visit next. My theory is generally "nah" because it's too similar in tone to Asylum (nuns), Coven (basically witch boarding school), and Harry Potter (also basically witch boarding school). I'll keep it on the list for now, though.

3. The Next Season Arc Will Center Around Aliens... For Real This Time

Because (spoiler! spoiler!) Asylum basically tied the ends of its story with an alien subplot, so we'd have a tangential connection right there. I feel like this one is hotly anticipated (and series star Evan Peters-approved), but the logistics of doing a space story seems... I don't know, a little ambitious and sci-fi, even for AHS.

4. The Next Season Will Bring Lady Gaga Back In The Mix

On one hand, she got a Golden Globe for her role, so you'd think they'd want to keep her on. On the other hand, Gaga has her hands full with a new album, so who knows if she has the time.

5. The Next Season Will Bring Back Jessica Lange

She hopped off for Season 5, but in an interview with The Wrap , she hinted that she'd be open to returning for a smaller role of some sort. Could she make a triumphant return for Season 6?

6. The Next Season Will Feature Both Gaga And Lange As Badass Blonde Mortal Enemies

In a battle between young and old, I'm just going to say that I would not want to mess with Fiona Goode. Gaga is a force and an artist, but I've seen Lange as Fiona throw teenagers against a wall with a flick of her wrist. So.

7. The Next Season Will Feature Evan Peters In Any Capacity, Because He's Been In Every Other Season And It Just Has To

Like, I get it, you guys also created Glee, either just make a demon-possessed acapella group or quit it already.

9. We Load Up On The Pepper

You guys don't even know how much I want Pepper to be the gatekeeper connection between all of these story arcs.

Forget Lange and Gaga, we know who the real star of this series is.

11. It'll Be A Delightful Bloodfest That'll Keep Us Riveted

Would you expect anything less?

Whatever Season 6 of American Horror Story entails, though, one thing's for sure: It's gonna be epic.

More like this
Does Umbrella Academy Season 3 Have A Post-Credits Scene? The Answer Will Surprise Fans
By Brad Witter
Vanessa Hudgens Proves She's Always A Wildcat At This 'High School Musical' Location
By Alyssa Lapid
“The Door Is Always Open” For Another 'Breaking Bad' Spin-Off, Says AMC Boss
By El Hunt
Regé-Jean Page Spoke Out On His Rumoured 'Bridgerton' Return
By El Hunt and Maxine Harrison
Get Even More From Bustle — Sign Up For The Newsletter