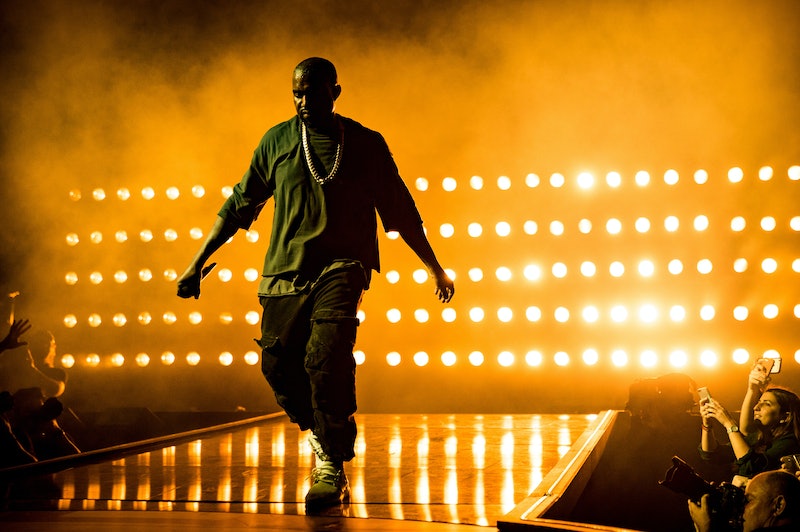 The hints —and likely musical and fashion hits— keep coming. We were already thinking that Kanye West's Yeezy Season 3 would be debuting on Feb. 11, the same day that his new album Waves (formerly Swish) is slated to drop. The hint was revealed in a tweet that West posted, featuring the date on his computer screen. It wasn't exactly, you know, subtle. Now, it seems that Yeezy Season 3 will have its debut at Fashion Week in a major way and at an iconic location — The World's Most Famous Arena— if these third party tweets are to be believed.

Racked pointed to a Ticketmaster link for an event commemorating both Swish and Yeezy Season 3 at Madison Square Garden on Feb. 11 during New York Fashion Week. But that link is no longer active. Could that be due to the fact that Yeezy changed the album title and it has to be updated? Or is the event now yanked? Or is it just the purchase option that is on hold? Who knows.

However, a pair of tweets were posted by an international cinema group outside the U.S., regarding a theatrical livestream of this event, which would seem to be a hybrid of an album premiere and the Yeezy Season 3 runway show. Will Waves be the soundtrack for the models waltzing down the YS3 runway?

Anything is possible. Bustle reached out to West's reps for comment and have not heard back yet.

The first tweet about the in-question Feb. 11 event at MSG is below.

Here's another, which notes the album title change and was posted this morning.

I need a dry erase board to keep track of all this stuff. There is a lack of clarity and that's likely intentional in order to build mystique.

With West's wife Kim Kardashian apparently rocking Yeezy Season 3 in a tweet and Instagram post, there's a lot of activity and no one is clarifying what is happening and when.

I will say that an event at MSG would be a huge deal, especially when it's a mashup of music and fashion, which are the two worlds West mainly traffics in. West is used to performing on grand music stages such as this, so it's a fitting locale.

Yeezy always keeps me on my toes. Granted, they are not toes covered by a pair of those fashion unicorns known as Yeezy Boost 350s. But I am on my toes nonetheless.