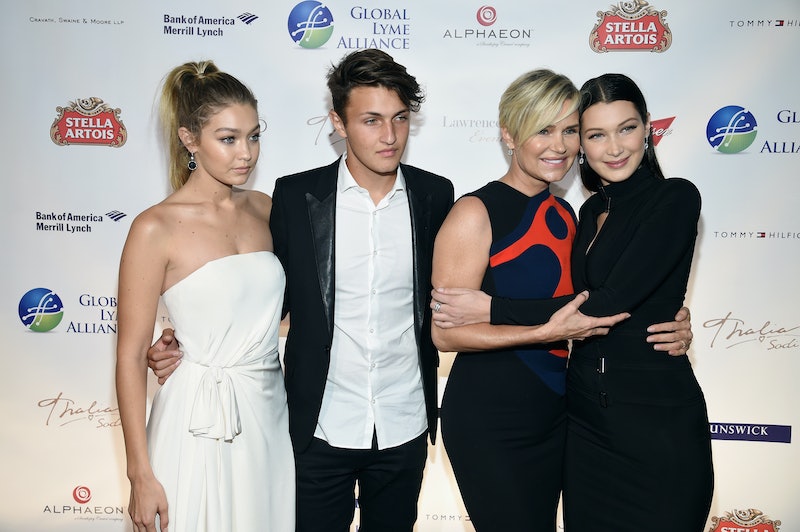 Being on a reality TV show certainly thrusts people into the spotlight, but sometimes the attention goes too far. A prime example of this is when Real Housewives of Beverly Hills star Yolanda Foster had to defend her family and their struggle with Lyme disease. On Tuesday night's episode, Lisa Rinna and Lisa Vanderpump called into question whether Foster's two children are really battling the chronic illness. Although she shouldn't have had to even respond to such a comment, Foster essentially dropped the mic and got real on her blog after the episode aired. Through outlining just how much Lyme has affected Bella and Anwar Hadid, Foster really proved their resilience. On her blog, the mom-of-three wrote,

I have nothing to prove and know that my journey is public due to the job I've chosen as a Housewife, but I can't accept something so delicate as my children's health being talked about in such a way. I know I'm not the only mother who would speak to this… It's one thing when your integrity is doubted, spoken of behind your back, but it strikes another cord when it's your children.

Foster went on to explain just how much of an impact the disease has had on her two kids, who were diagnosed at the end of 2013. She explains they've both been in "extensive holistic treatment" since then. She also adds that it's common for multiple family members to have Lyme, especially since they lived on a horse ranch for 10 years and spent a ton of time outdoors.

According to Foster's blog post, Lyme disease prevented Bella from pursuing her dreams of a professional riding career, including trying for the Olympics. As Foster notes,

This was the biggest heartbreak of her life and an extremely sensitive subject for her. She is resilient and focused on a new direction—she's made a name for herself in the modeling industry while she struggles with symptoms of chronic Lyme every day.

She's right; Bella has been walking runways for Chanel, Marc Jacobs, and Balmain — some of the biggest names in the business. The fact that she does all of that on top of struggling with her health is beyond admirable. As for her son Anwar, he luckily is still able to play football and completed his season with "healthy energy." He still receives treatment regularly.

That's not all that Foster did to stick up for her kids. On Tuesday night, she shared an Instagram post, laying by Bella's side as she has an IV in her arm. Here's an excerpt from the heartfelt caption:

Watching my brave babies stuffer in silence in order to support me in my journey has struck the deepest core of hopelessness inside of me, it is because of them that I continue to fight relentlessly....... I will not allow them to live a life of pain and suffering.

She also included the hashtags #LymeDiseaseAwareness, #FightingTheInvisible, #RealLifeProblems, #SoulPower, and #WeMustFindACureAffordableForAll. Lots of hashtags, but important ones at that. Through opening up, she's really sharing the depth of the heartbreaking disease and the daily battle they're enduring.

Honestly, it's a shame it's even come to this, but in a way, it's inspiring just how strongly Foster and her family are fighting — not just the disease itself, but the negativity coming their way. Wishing them all the best.