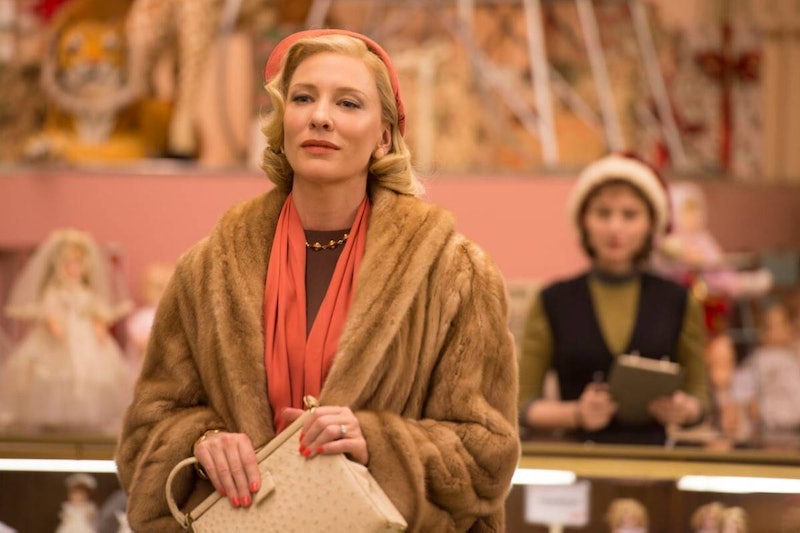 As the Academy of Motion Picture Arts and Sciences comes under fire for a lack of diversity in this year's Oscar nominations, a diversity of a different kind is being highlighted by the Gay & Lesbian Alliance Against Defamation: the 27th annual GLAAD Media Awards nominations have been announced, and they represent an encouraging step forward for LGBT representation on the big and small screen.

Last year, the big awards went to the likes of The Imitation Game (the Benedict Cumberbatch-starring biopic of Alan Turing), ABC's How To Get Away With Murder, and Amazon's Transparent. This year, Oscar hopefuls Carol and The Danish Girl (neither of which landed in the Best Picture race, ironically enough) are joined by less splashy fare like the Lily Tomlin-starring road trip comedy Grandma and the acclaimed indie drama Tangerine. HTGAWM and Transparent are once again back in the mix alongside new nominees like Sense8 and Master Of None.

But how do this year's nominees stack up against those of years past? Let's compare and contrast the 2016 GLAAD Media Awards with the nominees from 10 years ago to see what has changed — and what hasn't — in the last decade:

In 2006, three of the five films nominated in this category revolved around white gay male leads: Brokeback Mountain, Capote, and Kiss Kiss Bang Bang. Another, The Family Stone, featured an interracial gay couple in its large ensemble. Only one, the film adaptation of the Broadway musical Rent, featured any lesbian characters, and none featured transgender characters. (Unless you count Rent's Angel, although debate still rages to this day over whether Jonathan Larson intended the character to be trans or not.)

In 2016, only one out of five nominated films even featured a gay character: Steve Carell's supporting role in Freeheld. Three revolve around lesbian leads: Carol, Freeheld, and Grandma. Another, Dope, features a lesbian in a supporting role. And the last, Tom Hooper's The Danish Girl, is all about a transgender women.

About 10 years ago, movies that only received a limited theatrical release were, unsurprisingly, already more diverse than their wide release brethren. Only one features a white gay male character in a starring role (Joseph Gordon-Levitt's Neil in Mysterious Skin) and another, Israeli drama Walk On Water, features a gay character in a supporting role. One, the rom-com Saving Face, featured a lesbian Chinese-American surgeon as its main character. And both the Thai drama Beautiful Boxer and the American road trip dramedy Transamerica revolved around transgender women (both were portrayed by cis performers — Thai actor Asanee Suwan in the former, Oscar-nominated actress Felicity Huffman in the latter.)

Even though this category was already relatively diverse a decade ago, it has gotten even more so. None of the five nominees revolve around the experiences of white gay men. One, Appropriate Behavior, is about a bisexual Persian-American woman. And all four of the others reflect the varied experiences of transgender characters from many different backgrounds: the Australian mother in 52 Tuesdays, the small town Kentucky teen in Boy Meets Girl, the aspiring Native American model in Drunktown's Finest, and the two L.A. street workers in Tangerine. Even more notably, all five of those characters were played by performers who are transgender or gender-nonconforming in real life.

In 2006, TV dramas were already a pretty diverse bunch — as long as you had cable. Showtime's The L Word and Queer As Folk both featured large casts that contained gay, lesbian, bisexual, and trans characters over the course of their many seasons. HBO's Six Feet Under featured an interracial gay couple among the show's core cast. Over on The N (now known as TeenNick), young viewers could see two teenage girls in a budding relationship. But the only representation of the Big Five broadcast networks came from ABC, which featured an HIV-positive gay character on their political drama Commander In Chief.

A decade later, and TV has become a wildly more diverse landscape — as is reflected in the expansion of the category to 10 nominees, a change that took effect last year. Broadcast channels have a much more significant presence here as well, with fully half of the nominees airing on Big Five networks (although both CBS and NBC are conspicuously absent). And even in the absence of Showtime's two pioneering dramas, all aspects of the LGBT spectrum are covered, with shows like How To Get Away With Murder and Shameless featuring bisexual characters and Orphan Black and Sense8 featuring transgender characters. In Sense8, trans hacker Nomi is even played by real-life trans actress Jamie Clayton.

For some reason, out of all these major categories, TV comedies have long been the least diverse bunch. About 10 years ago, GLAAD could apparently only find three shows to even nominate for the award — and that number wouldn't go up to the standard five until 2008, thanks to shows like Desperate Housewives and Ugly Betty. While Will & Grace featured two gay stars and Out Of Practice featured a lesbian supporting character — the UK's original Shameless ran the gamut of gay, lesbian, and bisexual characters — none of the nominated comedies contained any transgender characters.

In 2016, the defending champion in the comedy category is an incisive portrait of a transgender woman in transition. Two other shows, Faking It and Orange Is The New Black also feature trans or intersex characters in their ensemble casts. However, this category remains the one that is still most devoted to the experience of gay men. Six out of the 10 nominees focus primarily or exclusively on the "G" of LGBT: Brooklyn Nine-Nine, Grace And Frankie, Looking, Modern Family, Please Like Me, and Vicious.

While it's clear that sitcoms still have some strides to make in terms of the variety of LGBT characters they feature, it's clear that film and television in general have made great strides in representation over the past decade. These strides are reflected in the fact that, for the first time in their 27-year history, the GLAAD Media Awards will be televised — in a one-hour special airing on Logo in April.

You can see the full list of GLAAD nominees here.