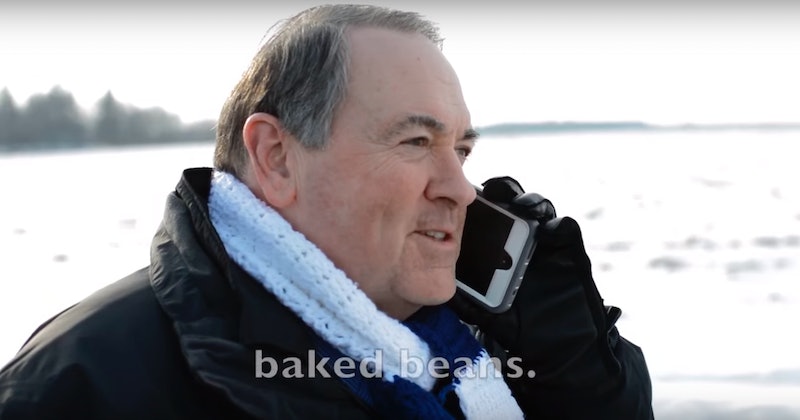 With the Iowa Caucus fast approaching, presidential hopefuls on both sides are doing all that they can to attract voters from the Hawkeye state. While most candidates are doing the fairly standard amount of campaigning and schmoozing, one low polling Republican is making his presence known through pop culture. Mike Huckabee has released an Adele parody video turning "Hello" into a yearning ballad for the GOP. It's not exactly what voters were expecting and certainly a weird way to highlight a state which holds substantial power in politics.

The video, entitled "Hello, HUCK," was released on Mike Huckabee's official campaign Youtube channel on Wednesday. If you have any doubt about the parody's validity, simply head over to MikeHuckabee.com, where it's proudly featured on his homepage. The riff on Adele is an odd form of pandering, juxtaposing iconic restaurants, cuisines, and Iowa cities with rather arbitrary digs at the left. A vaguely Adele-esque singer croons the similarities of President Obama and Hillary Clinton and proclaims "If Bernie wins I'm gonna die" during the chorus. One thing that "Hello, HUCK" gets right is the fact that the election has been perhaps the most bizarre and downright crazy in recent memory. It's apparently crazy enough to give us this video, which is certainly saying something.

Huckabee needs any bit of momentum he can create at this juncture. The former Arkansas governor is currently polling at just three percent, according to Mediaite. His numbers have been dismal enough to demote him to the earlier debate for the past two times that Republicans have faced off on a national stage. The Adele parody is just one such way to regain the attention that Huckabee so desperately needs to once again win the Iowa Caucus as he did during his 2008 presidential campaign. Huckabee's campaign is reportedly going to overdrive and he is planning over 150 stops in Iowa alone to speak his piece and court voters during this pivotal time.

"Hello, HUCK" certainly doesn't make it seem as if the candidate is desperately enjoying his duties in Iowa, however. A particularly puzzling section about the frigid weather in the Midwestern state may not be the best way to gain the favor of residents. Oh, and the bizarre text messages he appears to receive from Hillary Clinton, who misses Iowa, and Ted Cruz, who proclaims that he's Canadian provide more questions than answers. There's certainly little within the video to do with Huckabee's actual politics. Perhaps "Hello, HUCK" could've better served as an introduction to the candidate and not the fastest way to ruin your favorite Adele song. At least he's got a campaign jam for those long, frigid bus rides across Iowa now.

More like this
What Is Barack Obama’s Net Worth? He Makes *Way* More Now As An Ex-President
By Hugh McIntyre
How To Support Gun Control Reform Right Now
By Morgan Brinlee and Carolyn Steber
BTS Is Visiting The White House To Discuss Anti-Asian Hate Crimes With President Joe Biden
By Jake Viswanath
Cardi B Explains To David Letterman Why She Uses Her Star Power For Politics
By Jake Viswanath
Get Even More From Bustle — Sign Up For The Newsletter