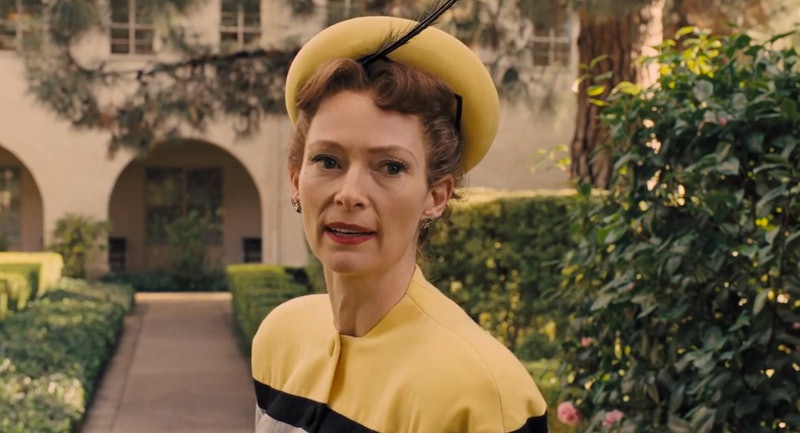 The Coen Brothers have outdone themselves with their latest film, Hail, Caesar!, which seems to cram an almost record-breaking number of stars into one movie. But other than the headline-grabbers like George Clooney, Scarlett Johansson, and Channing Tatum, the film also features the perennially underrated and monstrously talented Tilda Swinton. Swinton threatens to steal the show from her famous co-stars, and the chameleon-like actress totally nails the Hollywood Golden Age look the film is going for. But is Tilda Swinton's Hail, Caesar! character a real person?

Honestly, that's kind of a trick question, since Swinton plays not one, but two characters in the film: Identical twin gossip columnists Thora and Thessaly Thacker. The two sisters are each threatening to publish competing stories exposing different scandals about Baird Whitlock (Clooney), fictional Capitol Pictures Studio's biggest star who has gone missing. The sisters are charismatic and relentless journalists, but they were not real people. They may, however, have been influenced by someone who was very real indeed. When news of the film was first reported, several outlets stated that Swinton was portraying famed Hollywood gossip columnist Hedda Hopper. In fact, several sites, including IMDb, still list Hedda Hopper as the name of the character played by Swinton in the film. Therefore, it seems likely that Hedda Hopper did serve as the inspiration for the twins, but who was she?

Hopper was an actress beginning in the silent era of the film industry, but she was best known for her later career as a Hollywood gossip columnist. She began a column called "Hedda Hopper's Hollywood" in 1937, and it soon made its way into the Los Angeles Times, New York Daily News, and thousands of other papers around the country. In her column, which was basically the TMZ of its day, she went after some of the biggest names in the industry, which included launching an alleged smear campaign against Charlie Chaplin.

Hopper also allegedly played a major part in the anti-communist blacklisting scandal of the 1950s. She was portrayed on screen just a few months ago by Helen Mirren in Trumbo , showcasing her role as an antagonist of blacklisted screenwriter Dalton Trumbo. On a lighter note, Hopper was known for her extensive collection of flamboyant hats, and Swinton's Hail, Caesar! characters also sport some interesting headwear; probably as a nod to Hopper.

It isn't clear if the Coen Brothers originally wrote Hail, Caesar! with Hopper in the script, or if her inclusion was just a rumor that wouldn't go away, but it seems evident that the infamous Hollywood gossip columnist at least provided the inspiration for Tilda Swinton's twin journalists, Thora and Thessaly Thacker. From the hats to the threats of scandal to the larger-than-life personalities, I'd say Swinton easily captures the spirit of Hedda Hopper in Hail, Caesar! — even if that's not the name of who she's playing.