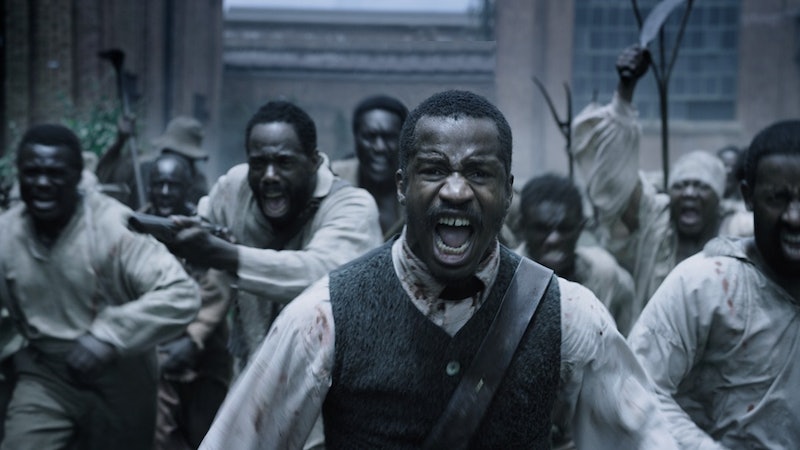 The ballots haven't even been cast for this year's Academy Awards (voting will open on Friday, Feb. 12) and yet Hollywood is already looking forward to the next shiny new thing: namely, which movie will win the Oscar in 2017 . The Sundance Film Festival, which happens in Utah every January, is always the industry's first look at what exciting new movies the year will have to offer. And if this year's slate of Sundance premieres is any indication, then we're in for a heated — and hopefully more diverse — Oscar race next season.

There are still several days to go before the festival officially ends on Sunday, Jan. 31, but distributors have already been busy auctioning and shelling out millions of bucks to acquire the rights to the most promising new films. Even streaming services like Amazon and Netflix are there, which will hopefully expand the definition of awards-worthy fare to include their online platforms.

So which movie premiering at Sundance is the most Oscar-friendly? While there's no scientific method for predicting which of these titles might wind up landing nominations, we can look at things like the genre, the inspiration, and the reviews — as well as the Oscar history of the filmmakers and actors involved — to try to get a sense of which films will fare the best with the Academy.

Here are 16 movies from this year's Sundance Film Festival ranked by their likelihood to earn an Oscar nomination next year:

Star Paul Dano has never been nominated for an Oscar, but he's appeared in a number of Best Picture-nominated films — Little Miss Sunshine, There Will Be Blood, 12 Years A Slave — and he came thisclose to nabbing his first nod this year for his performance in the Brian Wilson biopic Love & Mercy. But, epic performances aside, I wonder if the Academy is really ready to embrace a film that features Daniel Radcliffe as a flatulent corpse.

With Making A Murderer all the rage these days, could this Southern neo-noir — about a young man who served time for a crime he didn't commit before being exonerated — ride a wave of sentiment to the red carpet? It certainly doesn't hurt that it co-stars Oscar winner Octavia Spencer (The Help) and Emmy nominee Elisabeth Moss (Mad Men).

No one involved in this film — writer/director/producer Richard Tanne or stars Parker Sawyer and Tika Sumpter — have ever been nominated for Oscars. But they have something else going for them: their movie is about the courtship of Barack Obama and Michelle Robinson in ;80s Chicago. (And hey, the movie depicts their first date, when the future First Couple went to a screening of Spike Lee's Oscar-nominated Do The Right Thing.)

Ira Sachs (Love Is Strange) wrote and directed this drama starring Oscar nominee Greg Kinnear (As Good As It Gets) about two young boys whose friendship is tested when their parents get embroiled in a rent dispute. Produced by Christos V. Konstantakopoulos — who also produced Richard Linklater's Oscar-nominated Before Midnight — the film may do well if it hooks Academy viewers with an emotionally resonant coming-of-age story like Linklater's own Boyhood.

You may think that this indie dramedy, about an eclectic family reunited when the matriarch is stricken by an illness, sounds like typical Sundance material — and you'd be right. But when that dramedy features Oscar nominee Richard Jenkins (The Visitor), Oscar nominee Anna Kendrick (Up In The Air), Emmy winner Margo Martindale (The Americans), Emmy nominee John Krasinski (The Office), Sharlto Copley (of the Best Picture-nominated District 9) and more, you pay attention. Will the Academy?

Kelly Reichert was nominated for the Grand Jury Prize at Sundance for her feature film debut, River Of Grass, in 1994. This is her third team-up with Oscar-nominated actress Michelle Williams (My Week With Marilyn) after 2008's Wendy And Lucy and 2010's Meek's Cutoff. Also starring are Oscar nominee Laura Dern (Wild) and Kristen Stewart — who was herself considered a strong contender for Supporting Actress this year for her role in Clouds Of Sils Maria.

Writer/director/producer John Carney previously made Once, which won Best Original Song in 2007 for "Falling Slowly," and Begin Again, which was nominated for Best Original Song last year for "Lost Stars." Surely he'll go three-for-three in the category with his next movie musical, about a young boy who starts a band in order to impress his crush. But can the film itself break into some bigger categories this time?

Writer/director/producer James Schamus is a three-time Oscar nominee — most recently as a producer on the Best Picture-nominated Brokeback Mountain — and Indignation is two things the Academy loves: a period piece, a war drama, and a literary adaptation. (Five of this year's eight Best Picture nominees are based on books.) Star Logan Lerman has been looking for a breakout role since The Perks Of Being A Wallflower. Could this be it?

Writer/director Matt Ross is primarily known as an actor who has appeared in two Best Picture-nominated films (The Aviator and Good Night, And Good Luck) — including having been personally named on the SAG Outstanding Cast nomination for the latter film. He directs two Best Actor nominees, Viggo Mortensen (Eastern Promises) and Frank Langella (Frost/Nixon) in this movie about a man raising six children off-the-grid who is forced to reintegrate them into society after his wife commits suicide.

Writer/director/producer Whit Stillman already has one Oscar nomination under his belt for penning the Original Screenplay for Metropolitan back in 1990. Is his second on the way? This film, based on a posthumous Jane Austen novel titled Lady Susan, stars Kate Beckinsale the devious Lady Susan Vernon and Oscar nominee Chloë Sevigny (Boys Don't Cry) as her best friend, Alicia Johnson.

A writer on Orange Is The New Black, Sian Heder makes her feature film debut scripting and directing this dramedy about three women — Oscar nominee Ellen Page (Juno), Emmy winner Allison Janney (The West Wing), and Emmy winner Tammy Blanchard (Life With Judy Garland: Me And My Shadows) — raising a child together under strange circumstances. Emmy winner Uzo Aduba (OITNB) and Emmy nominee Zachary Quinto (American Horror Story) guest star, while Chris Columbus — the prolific producer behind such hits as Harry Potter, Home Alone, and The Help (for which he earned an Oscar nomination) — produces.

Star Rebecca Hall has appeared in such Oscar-nominated fare as Woody Allen's Vicky Cristina Barcelona, Ron Howard's Frost/Nixon, and Ben Affleck's The Town — but she herself has never been nominated. That may very well change thanks to this biopic, in which she stars as Christine Chubbuck, a newscaster who committed suicide live on the air in 1974. The story, which also co-stars Golden Globe winner Michael C. Hall (Dexter), was also the inspiration behind Sidney Lumet's 1976 Oscar-winning film Network .

2. Manchester By The Sea

Filmmaker Kenneth Lonergan — who is also a playwright most famous for 1996's This Is Our Youth — takes his time. He has only directed three movies in 16 years: 2000's You Can Count On Me (starring Laura Linney and Mark Ruffalo), 2011's Margaret (starring Anna Paquin, Mark Ruffalo, and Matt Damon), and now 2016's Manchester By The Sea. You Can Count On Me earned Linney a nomination for Best Actress and Longergan nomination for his Original Screenplay (which would be proceeded in two years by his screenplay for Martin Scorsese's Gangs Of New York). Manchester By The Sea stars Oscar nominee Casey Affleck (The Assassination Of Jesse James By The Coward Robert Ford), Oscar nominee Michelle Williams (My Week With Marilyn), and Emmy winner Kyle Chandler (Friday Night Lights) in a family tragedy that has been the critical darling of Sundance this year.

1. The Birth Of A Nation

This film may not have the awards pedigree of some of its competition — the only person involved who has an Oscar nomination is supporting actor Jackie Earle Haley (Little Children) — but it's been the talk of Park City, Utah ever since it was purchased for distribution by Fox Searchlight Pictures for a record-breaking $17.5 million... the most money a studio has ever spent on a movie in the history of the Sundance Film Festival. After another year of a lack of diversity amongst Oscar nominees in a row, I'm guessing Fox Searchlight will be taking full advantage of that furor to push Birth Of A Nation all the way to Oscar gold in 2017. And they have the clout to do it: other films they have successfully campaign to Best Picture nods have included The Full Monty, Sideways, Little Miss Sunshine, Juno, 127 Hours, Black Swan, The Descendants, The Tree Of Life, Beasts Of The Southern Wild, The Grand Budapest Hotel, Brooklyn, Slumdog Millionaire, 12 Years A Slave, and Birdman — the latter three of which took home the trophy.

And if Birth Of A Nation lands a nomination for Best Picture one year from now, it won't just be because of the diversity issue amongst the films that the Academy nominates for the Oscars. The film, starring, produced, written, and directed by Nate Parker (Beyond The Lights) about Nat Turner's slave rebellion in 1831, has been described by reviewers as "searingly impressive," "a beautiful, reflective film," and "very much in tune with the current state of heightened racial friction."

Which of these will be this year's Boyhood or Whiplash, a movie that dazzles audiences at Sundance so much that it is able to sustain its momentum for 12 whole months, ultimately raking in Oscar gold in February of 2017? We'll find out in time... but chances are high that at least one of these titles will end up on our list of Best Picture nominees this time next year.