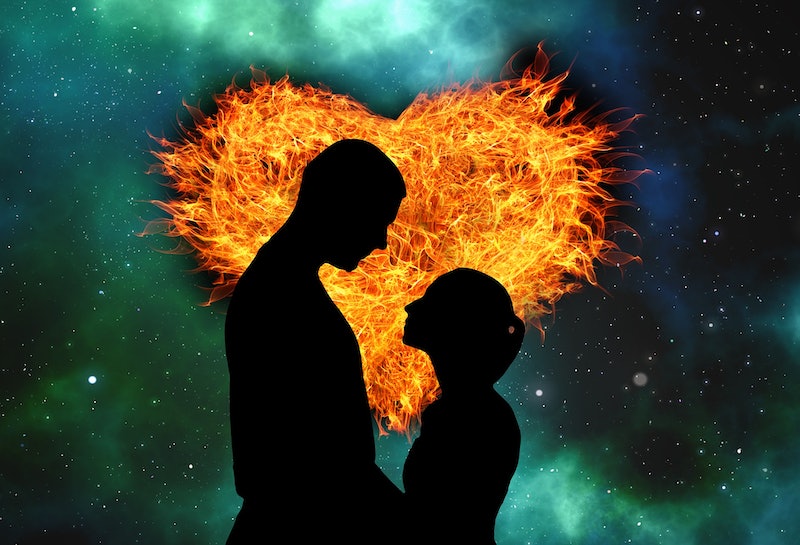 Any holiday can bring with it the unwanted bonus of additional stress, just by virtue of the fact that holidays always carry weighty expectations. The blunders that happen on holidays aren't easily forgotten, which is all the more true of the biggest mistakes people have made on Valentine's Day. We all remember the time when everyone was late to our birthday party or the Thanksgiving turkey took 15 hours to cook or we accidentally celebrated New Year's Eve at midnight on the sidewalk because we lost track of time and couldn't find a cab, right? But what about V-Day, the most charged romantic holiday of them all? What happens when everything goes wrong, nothing comes out OK, and complete chaos breaks out?

Five truly terrible stories answer this question, including one that takes the cake, about the woman who chartered a heli to surprise her boyfriend, only to find out that he was afraid of heights — and then the chopper crashed. Let's all hope that nothing so dramatic happens to any of us this Valentine's Day, and if it does, that we roll with it, like the guy who accidentally invented "AshlAndytine's Day," a "holiday" that he and his girlfriend plan to celebrate again this February 14. Whatever works!

Well, there was that time I chartered a helicopter to surprise my boyfriend — and I never bothered to ask about his fear of heights. (He was less than happy, but I somehow coaxed him on the helicopter.) Oh, and it crashed. Luckily we all walked away.

It crashed due to a faulty fuel line. We were flying parallel to the foothill mountain Golden ([the location of the] Coors Brewery). After the crash we all walked away, but broke up shortly thereafter. He did not blame me, and we had an excellent pilot who knew how to autorotate, so he saved us all. It was Valentine's Day!

Valentine’s Day 2006 was a Valentine’s Day I won’t soon forget. I was a fresh-faced 17-year-old and had just started dating a very nice girl, let’s call her Ashley. We had been dating for a few months (decades in high school years) and things were going great. The night before Valentine’s Day, I was home when my ex called; she and I had been dating for a really long time (on and off since about eighth grade), which at that time was pretty unheard of. She sounded distraught and wanted to come over, and against my better judgement, I welcomed her to come over so we could talk. Well, as you probably guessed, one thing led to another and we made up that night after months of being apart. Following the high of reuniting, I was met with the terrible reality of my situation, which was facing Ashley to give her the news — on Valentine’s Day.

I went to Ashley’s house to drop the bomb and was met with smiles, hugs and kisses. It was horrible. I saw her family, they greeted me kindly, and we went to her room so we could (in theory) exchange gifts and whatnot. That’s when I told her. She was completely taken aback, which then turned to sorrow, soon followed by virulent hatred. The following few weeks at school were awful, her friends shot me stares of pure murderous disgust and I was left to meet the inquiries of curious friends and acquaintances who surely thought I was a scumbag. Anyway, that was the biggest mistake I ever made on Valentine's Day. For those curious, my ex and I broke up again a couple months later. Being 17 was the worst.

The worst Valentine's Day was when I was with a 'bad boy' who asked me out to an expensive, romantic restaurant, and he asked me to split the bill. I should have known better at that point that he was bad news (when a guy asks you out and has no intention of paying, it's a bad sign), but it wasn't until a few years later that I really learned what it is like to date a great guy.

I don't know if I would consider it a mistake, but it may be one that turned into a wonderful night. Some may consider it a mistake that I decided to drive around aimlessly on Valentine's Day because I did not have a valentine that year. A way to wander, get rid of some of my listless energy, and listen to some sad songs on the radio. A way to feel sorry for myself, while having the freedom to roam.

It just so happened, without planning it, that I came across my best friend at the time, who had the exact same idea. We passed each other on opposite sides of the street, flagged each other down, and decided to stop at the nearest restaurant for a drink. What started out as a slightly pathetic and melancholy night turned into great company, hilarious conversation, and one of the best Valentine's Days I probably ever genuinely had!

After a few months of dating, I targeted Valentine's Day as the night I would take our budding relationship to the next level. In preparation, I got to the restaurant 20 minutes early to secure a table near a window and away from the to-and-fro of the kitchen. Scanning the room, I focused on the perfect setting for where I was going to lean over the soft candlelight after dinner and confidently declare, 'I love you.' I should have suspected something was awry when I had a choice of any seat in the place.

Feeling suave, I rationalized the empty tables in the dining area as a testament to my well-planned restaurant selection after long, demanding hours of research on Yelp. There I sat, a man standing on the precipice of launching himself into the unknown abyss of the L-word. And, hey, even if she didn't say it back right away, I could always chalk it up to getting a little carried away on the most romantic night of the year.

She's here. She's not dressed up. She didn't go home after work. And wait, why IS the restaurant empty, again?

'Well, you know, I wanted to make tonight special.'

'I can tell. If you did all this for the night before Valentine's, I can't imagine what you're planning for tomorrow!'

I got the date of Valentine's Day wrong. I had a moment of inspiration. 'Ohhh, I should have told you, babe. I don't believe in celebrating the commercial Valentine's Day. We're too good for that; I thought we could invent our own holiday and call it AshlAndytine's Day. I probably should've mentioned that. I'm sorry.'

She began to smile, and then let out a chuckle. I think she knew, but didn't care. That's thing about Valentine's (or the day before) — you don't have to get everything right to make it special.