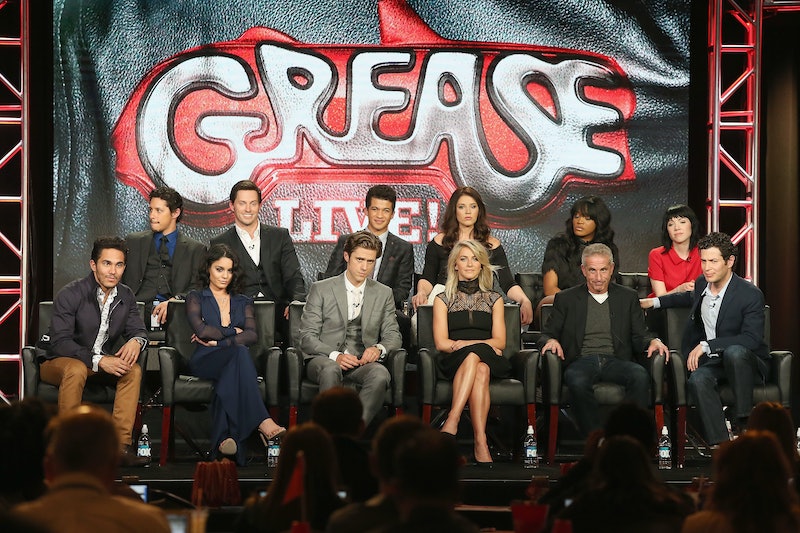 I've got chills, and they're multiplying. OK, so I'm still not 100 percent sure what those song lyrics mean, but I do know that I'm super stoked for the latest network musical to hit our airwaves. Fox is airing Grease Live! on Sunday, Jan. 31, and if you're a fan of the original musical or the 1978 movie, you should be majorly excited. The special will take you back into the halls of Rydell High and re-introduce you to Sandy, Danny, and the rest of the Pink Ladies and T-Birds. The musical stars talented actors like Julianne Hough as Sandy and Les Misérables and Graceland actor Aaron Tveit as Danny, so you know that this show is going to live up to the hype. Also on deck is Vanessa Hudgens as Rizzo, Keke Palmer as Marty, and Carly Rae Jepsen as Frenchy. Grease Live! has connections to so many actors and singers that you love, but the talent behind the characters isn't the only reason to get excited. Grease Live! also has a major connection to Pretty Little Liars , and it'll blow your mind.

I took a tour of Warner Bros. Studios with the Grease Live! team, and I got to see the massive, super intricate set pieces that the production will be using for their live show on Sunday. Though the musical is live, the performance isn't on a singular stage: Instead, the actors and will move from location to location. It also won't be easy — some lots are nearly half a mile from one another.

As most Pretty Little Liars fans know, Warner Bros. is also the home of Rosewood. Now that the series has jumped ahead five years and the girls are no longer in high school, the Liars' former stomping grounds are being used for Grease Live! Remember Rosewood High?

It has officially been repurposed for Grease Live! (at least, for now) and looks like this:

See the name on the building? Rydell High is secretly located in Rosewood! That's not the only PLL connection from Grease Live! — though it's unclear how much of these fronts we'll actually see on camera, the carnival scene from Grease will take place in the courtyard that makes up the main street in Rosewood. The church where a million funerals have taken place and Rosewood's city hall will all be in the landscape of one of Grease Live!'s most ambitious scenes.

Tune into Grease Live! on Sunday, and you may feel like you've been transported into an episode of PLL — just with far more singing and dancing and a much more carefree ending.

For everything Pretty Little Liars, check out into Bustle's podcast below: