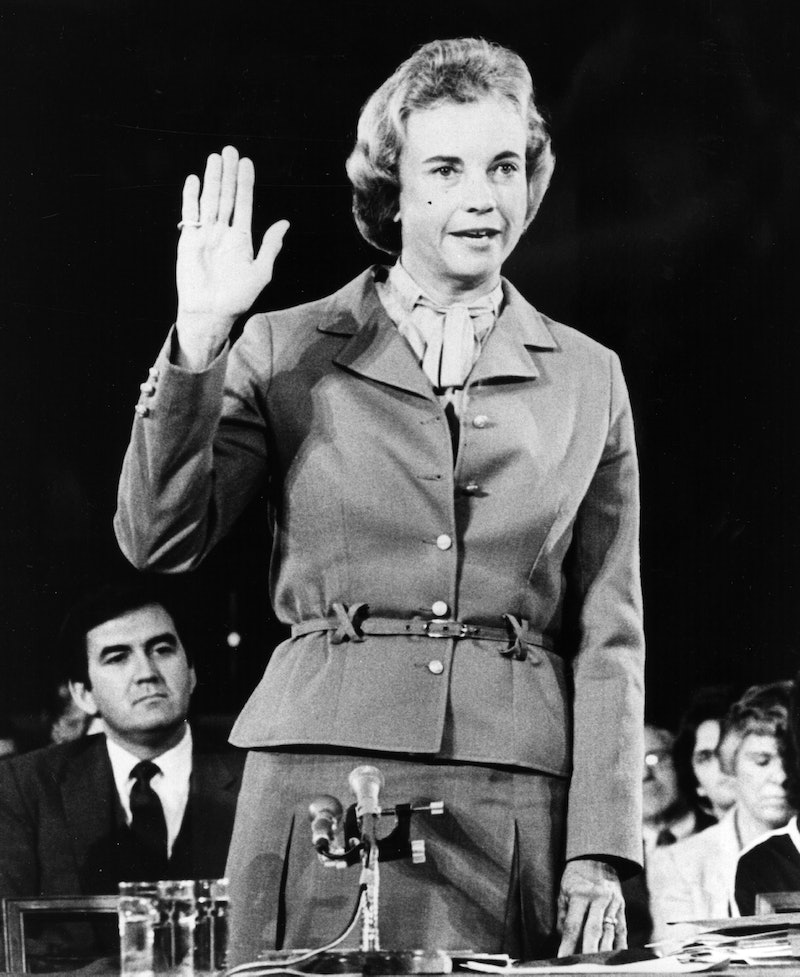 Sandra Day O'Connor was the first woman to be serve on the Supreme Court. Her journey to the highest court in the land is an inspiring one. Growing up on a cattle ranch in Texas, O'Connor tended to her family's property and even wrote about the experience. She would go onto study at Stanford University, getting a degree in economics before shifting her focus to law. It is her dedication to finding any opportunity that she could in a male dominated field that ensured her rise as an attorney. A moderate Republican, the lawyer was picked by President Ronald Reagan as his Supreme Court nominee. Sandra Day O'Connors first days as a SCOTUS judge as well as the hearing leading up to her confirmation mark an incredibly historic moment in our nation's history.

O'Connor served for nearly two-and-a-half decades before retiring under the Bush administration in 2006. She issued the opinion in pivotal cases including that of Grutter v. Bollinger, which upheld affirmative action. She is also a recipient of the Presidential Medal of Freedom, receiving the honor from President Obama in 2009 for her dedicated SCOTUS services. O'Connor's Bench chair and other professional affectations are currently on display in the Supreme Court building. She continues to inspire women to this day, as do these photos from the past.

President Reagan made a campaign promise to appoint the first woman to the Supreme Court, successfully doing so in September 1981. In this photo dated just two months prior, Reagan and O'Connor can be seen in the presidential rose garden on the White House grounds. The two were presumably discussing her formal nomination, which he would announce in August of that year.

Getting The Lay Of The Land

Massachusetts Congressman and Speaker of the House Tip O'Neill is seen showing O'Connor around the Capitol around the same time that she met with Reagan. An influential liberal who served in politics for over three decades, O'Neill certainly didn't agree with O'Connor's politics but nonetheless supported her nomination as much as he could. He reportedly called the president's decision the best one he'd made since being sworn into office.

O'Connor testified before the Senate Judiciary Committee in Sept., a process that was surprisingly swift and included the justice being asked about her thoughts on abortion. The multi-day affair included testimony and questions from countless senators.

Ultimately, O'Connor would successfully complete her confirmation hearing and be sworn in just two weeks after the hearing had ended. She became the first female SCOTUS judge on Sept. 25.

Celebrating With Her Family

Weeks later, O'Connor was back at home in Paradise Valley, Arizona, celebrating with her husband, John Jay, and sons, Scott, Jay, and Brian. Family is an important part of O'Connor's life, serving as an inspiration for her to continue striving towards the greater good.

It's a topic she highlights heavily in her memoir about her time in the Supreme Court, entitled The Majesty of the Law: Reflections of a Supreme Court Justice. O'Connor writes:

It is the individual who can and does make a difference even in this increasingly populous, complex world of ours. The individual can make things happen. It is the individual who can bring a tear to my eye and then cause me to take pen in hand. It is the individual who has acted or tried to act who will not only force a decision but also have a hand in shaping it. Whether acting in the legal, governmental, or private realm, one concerned and dedicated person can meaningful affect what some consider an uncaring world. So give freely of yourself always to your family, your friends, your community, and your country. The world will pay you back many times over.

After Being Sworn In

O'Connor was overjoyed to be appointed to the Supreme Court. These iconic photos of the justice show a glowing, proud woman forging new ground and setting an example for all female Supreme Court justices who have been appointed henceforth.

Given the many ways that the country has changed since O'Connor's appointment in 1981, it's a hopeful sign that women legal professionals are now prevalent. O'Connor says she feels good about the future for women pursuing their professional dreams. In an interview with the Harvard Business Review, she had this advice to offer women just starting out. O'Connor said:

The situation is positive, and women can be hired for good positions, so it’s a question of finding the right fit. When I was first looking for work, they just weren’t hiring women, period. Today as a woman with talent and interest and energy, you ought to be optimistic.

More like this
How Reality TV Stars Conquered Your Bookshelves
By Anna Peele
Zosia Mamet Opens Up About Her Eating Disorder
By Zosia Mamet
We’ve Got A Text! 'Love Island' 2022 Finally Has A Release Date
By Sam Ramsden
The 20 Best Audiobooks To Fall Asleep To
By Aoife Hanna and K.W. Colyard
Get Even More From Bustle — Sign Up For The Newsletter