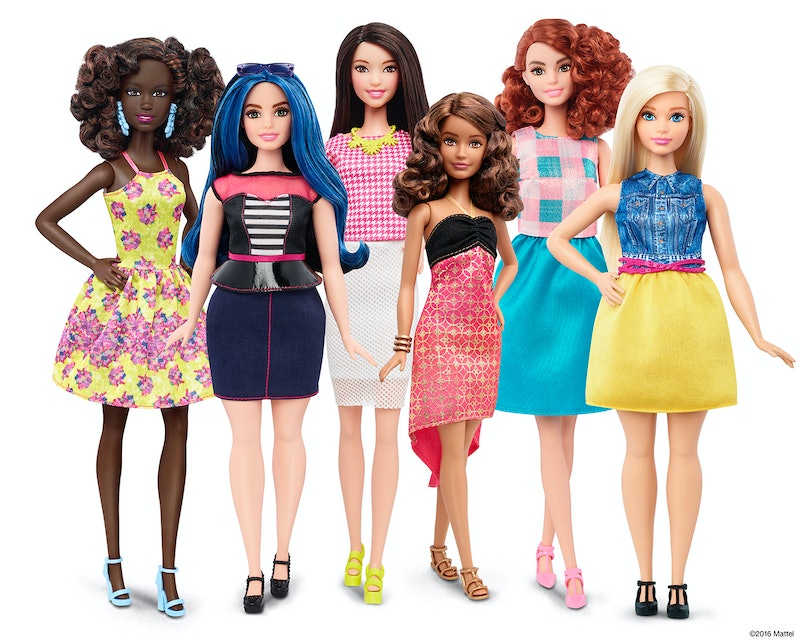 As a blonde haired, blue eyed, white, cis girl and woman, it might sound like the classic Barbie should have represented me — except I was a chubby child who grew into a fat woman, and Barbie was definitely not that. The launch of Barbie's new dolls seeks to create more inclusive representation than there has ever been in the company's 60-year history. On Jan. 28, Mattel's iconic doll became available in three new bodies: petite, tall, and curvy. For the brand's work toward expanding options for Barbie's race and height, I applaud it. But as a plus size person, I still feel disappointed by the new sizes.

According to TIME Magazine, "Mattel refuses to discuss the actual proportions of the new dolls or how it came to decide on them." Still, photos of the new Barbies seem to show that the curvy doll — though perhaps a bit closer to representing the average size 12 to 14 of an American woman — is still only the hourglass type of curvy. And she still appears to have a pretty flat stomach.

Model and actress Hari Nef also took to Twitter after the announcement to ask, "Where is trans Barbie[?]" And I would like to add, where is fat Barbie? Where is pear-shaped Barbie? Where is blind Barbie? Where is disabled Barbie? I'm not asking for an "ugly" Barbie — although that would be interesting — but for Mattel to find beauty in different bodies outside of a slim, cisgendered, able-bodied standard of beauty.

With body positivity recently reaching buzzword status, there could have been some strategic planning behind why Barbie decided 2016 was the time to reveal its expanded range. As TIME reported, Mattel has seen a decline in doll sales as of late, dropping 3 percent in 2012, 6 percent in 2013, and 16 percent in 2014. Meanwhile, we've seen other brands get a boost when they expand to reach a more diverse audience. Fast-fashion retailer Boohoo's sales grew 27 percent in 2014 after launching more inclusive lines, especially thanks to "the success of our rapidly growing plus size collection," according to joint chief executives Mahmud Kamani and Carol Kane.

IAmElemental action figures for girls raised almost five times the company's goal on Kickstarter. Its line of dolls were "intended to be a positive and fierce re-interpretation of the traditional female action figure," according to the Kickstarter site, proving that launching a body positive doll is not only possible, but incredibly conducive to success.

In the same TIME article, branding expert Jess Weiner commented, "Barbie has all this baggage. Her status as an empowered woman has been lost." Once upon a time, Barbie was a feminist icon. She was a woman who had many jobs even when women were often refused them. Barbie was a gal to look up to, at least from a political standpoint.

Politics have changed since Barbie's early days, but unfortunately, the doll has not. At least not enough. Of course, Barbie can still have any job. She can still be anything she wants to be. And that's an empowering message for girls if I ever heard one. But we're living during an era that has brought concepts of gender fluidity, transgender rights, fat positivity, and representation for all bodies into the limelight. Yet Barbie still hasn't largely deviated from the relatively thin, traditionally beautiful mold in which she first appeared over 50 years ago.

i-D magazine reported that Evelyn Mazzocco, Senior Vice President and Global General Manager for Barbie, finds the Fashionista line to be "more reflective of the world girls see around them — the variety in body type, skin tones, and style allows girls to find a doll that speaks to them." And this is undoubtedly true. The new variety will lead to representation for many little girls who had no Barbie that looked like them before. The steps forward for racial representation also need to be recognized and celebrated. But there is more that can be done for other marginalized groups, and that shouldn't be forgotten.

This has been the most dramatic change in Barbie's physical form since the doll's release in 1959 — although even then, people had qualms with Barbie's body type. "By 1963, women were protesting the same body men had ridiculed," TIME Magazine reported, referring to the fact that male competitors had insisted that no one would want a doll with boobs. Regardless of the many jobs Barbie dolls could have — be it President Barbie or astronaut Barbie or even feminist Barbie — she was still a thin, conventionally attractive, white woman. Now, she's slightly larger and more racially diverse, but she's still a conventionally attractive woman.

Perhaps the time will come when we can all find representation in the iconic Barbie brand. For now, there are other companies are killing it with their inclusive collections — including Lammily, the realistic Barbie alternative, Angelica, the natural hair, black Barbie alternative, and Makies, the disabled Barbie alternative — that, in my opinion, deserve just as much (if not more) praise for body positivity than the Fashionista Barbies have been receiving.

While I'm truly happy for the little girls who do get to find representation with their new Barbie dolls, I'm also holding out for the kids who don't yet have that privilege.

More like this
What’s The Kibbe Body Type Test That’s All Over TikTok?
By Marilyn La Jeunesse
The Most Gorgeous Plus-Size Looks From The Met Gala
By Dominique Norman
How Sunnies Face Is Championing Filipino Beauty
By Kristin Corpuz
How This Founder Manifested Ariana Grande As A Brand Ambassador
By Dominique Norman
Get Even More From Bustle — Sign Up For The Newsletter