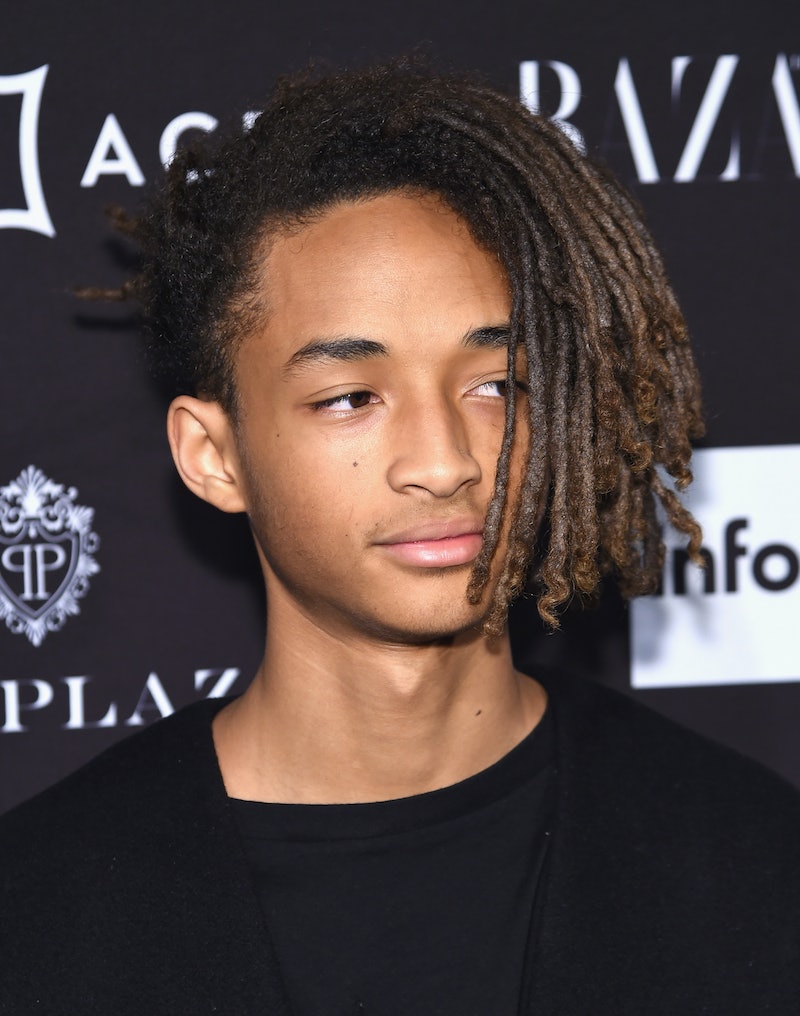 If you were in a supermarket in Korea right now, the newest Vogue Korea spread would likely catch your attention. On it, Jaden Smith challenged gender norms by appearing in a skirt. Not only that, but he has a red flower tucked behind his ear, his fingernails are painted a chic blue, and he's all topless and muscly, fluidly toying between the traditionally masculine and feminine in one pose. According to Mashable, the spread was shot by Peter Ash Lee and posted to Smith's Instagram earlier this week.

While ignoring gender norms has been something of a trend this past year, it could be argued that Smith is quickly becoming one of gender fluidity's biggest players. As Mashable pointed out, "Smith is being lauded across media for embracing gender fluidity, a trend that graced several runways during fashion weeks last year."

In 2015, we saw strides in gender fluidity and gender neutral clothing with major fashion houses like Gucci and Prada dabbling with the idea that women aren't the only ones that can take style cues from a man's closet. Rather, men can just as easily borrow from a woman's wardrobe as well. For a while, it's been totally normal for a gal to sport a men's Oxford shirt. But a man rocking a sheer lace overlay shirt or a peacoat with shrunken bell sleeves is finally being normalized, too.

So where does Smith fit into all of this? He's embraced the movement full force, from starring in agender campaigns to rocking skirts and dresses while off duty.

Not only did he sport a short dress during Coachella, but Smith appeared in Louis Vuitton's SS16 womenswear campaign this month as well, posing with a girl squad and helping remove gender from fashion. Not only that, but when it was prom time back in May 2015, he skipped the usual rented-tux routine and instead went with a prom dress of his own. Accompanying Amandla Stenberg (you might know her as Rue from The Hunger Games), Smith's prom dress was something of a shift paired with black leggings and a blazer, showing us that masculinity doesn't need to be threatened when a long hem is involved.

See? He's a total trailblazer. Whether he intends to or not, the 17-year-old is proving that a good mini can be enjoyed by anyone, and that there's no room for gender restrictions in fashion.

Smith isn't the only one embracing the gender fluidity movement, though. Here are three other celebrities who have pushed norms and come out killing their looks.

1. Kanye West Rocked A Leather Givenchy Skirt During A Concert

During his Watch The Throne tour in spring 2015, Kanye West donned a leather kilt and looked just as stylish as he would in a pair of pants.

The man has gone on record explaining his love for a good skirt. He told New York Magazine, "I did a lot more skirts in this collection for women than I usually do — we usually do a lot of pants. So I bought this one, and I discovered how nice it felt to wear. They’re comfortable, and wearing it made me happy, so I bought more. And now I just can’t stop wearing them." I'm right there with you, guy.

Like Smith, Leto is pretty well known for his gender fluidity — from wearing eyeliner to showing up to award shows in braided ponytails. So it's not too much of a shock seeing him don a skirt all casually.

If you ask me, not being shocked when a man decides to experiment with a so-called femme style is a beautiful thing.

Want more gender fluidity? Check out the video below, and be sure to subscribe to Bustle's YouTube page for more inspo!