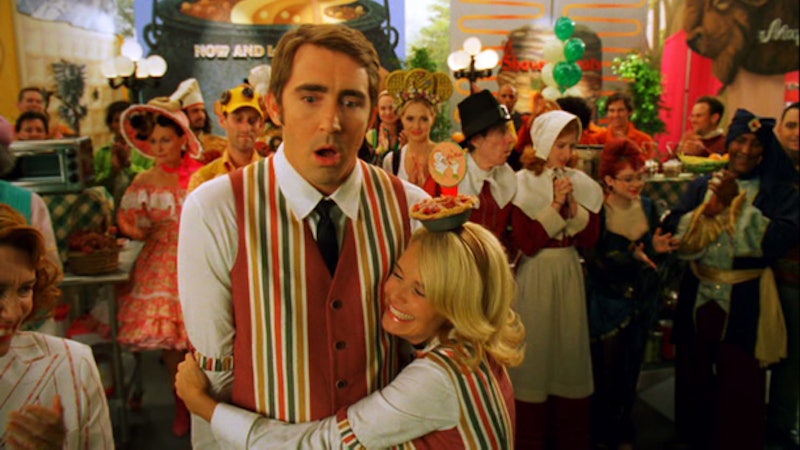 It was established from the "Pie-lette" that former next door neighbors and future no touching cuties, Ned and Chuck were written in the stars. I don't like to read things that are written in the sky so I was immediately captivated by Ned and Olive on Pushing Daisies instead. For all of its innumerable charms, I have always felt like Pushing Daisies missed a major opportunity where Ned and Olive were concerned. TV shows in general tend to stick with their first instinct pairing — think Ted and Robin on How I Met Your Mother or Rachel and Ross on Friends — even when a more interesting option comes along, and, to me, Ned and Olive were that more interesting option.

The Piemaker and his childhood sweetheart were charming, but Olive Snook was there giving Ned emotional support long before Chuck returned from the dead. Because he was so closed off from the world, I think Ned had a hard time seeing what an amazing person Olive was — until she was (briefly) not in his life anymore. Olive was the jolt of sunshine and realism the eternally pessimistic Ned needed, and Ned was the calming balance to Olive's endlessly energetic personality. They were perfect for each other, and I will never stop wishing Olive's unrequited crush had been requited.

Need more convincing that Ned and Olive could have been your favorite couple? You have come to the right place.

Physical contact, even if it's just a hug, is important. Ned went through life afraid to touch anyone after what happened to his mother, but Olive was an open person who loved showing physical affection. With her help, Ned could have learned to appreciate the simple joys of life.

Ned wasn't big on showing his feelings, but, when Olive regretted that he never looked at her the way he looked at Chuck, it's important to remember Ned said, "I wouldn't say never." He had some Olive feels; he just kept them to himself.

3. They Were Total BFFs

Some of the best relationships start out as friendships; just ask Dana Scully. Ned trusted Olive with Digby! That's huge. And Olive... well, there's nothing she wouldn't do for Ned, including going to a convent to keep herself from sharing any of his secrets.

4. Olive Called Ned On His Crap

I love Ned, but he could be blatantly oblivious to other people's feelings sometimes. No one was better than Olive at bringing Ned back to reality.

5. Their Kisses Were Amazing

Ned and Olive's kisses were rare, but, when the show offered one up, it was pure cuteness overload.

6. Ned Was There For Olive When She Needed Him The Most

Ned overcame his lack of self-awareness to give Olive the apology she so rightly deserved during her stint as a nun. He also posed as her fiancé when she asked. Whenever Olive truly needed Ned, he didn't let her down.

She's so tiny and he's so tall, and, if that visual doesn't make your heart sing like a canary, then I feel very bad for you.

8. They Make The Best Team

Two words: "Comfort Food." The Season 2 episode was all Ned and Olive, all the time, and it proved those two crazy kids worked best when they were together.

9. Even The Narrator Had A Thing For Them

I can't be 100 percent on this, but I'm pretty sure the Narrator was an Olive/Ned shipper. I mean this line alone: "Watching the Pie-Maker kiss the woman that wasn’t her, Olive stopped breathing. It was as if all the oxygen had left the room." He was definitely on Team Olive.

10. Their Pies Were Magical

The couple that bakes magic pies together, stays together.

It bums me out to see a person as determined, generous, funny, and loving as Olive Snook not get everything she wants out of life. The Pie-Maker seriously missed out, is what I'm saying.

Years after Pushing Daisies has ended, my heart still wants to see Ned and Olive growing old together in the Pie Hole, with her driving him crazy with her chatter while he secretly thinks her constant talking is the most adorable thing in the world. They could have had it all, guys.