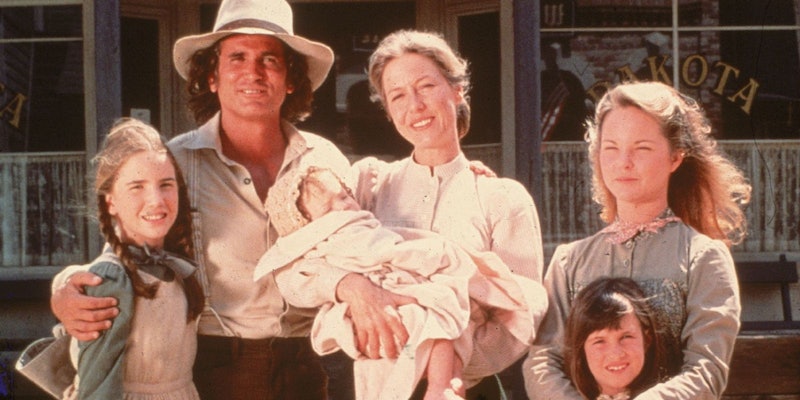 No casting decisions have been announced yet, but the Little House on the Prairie movie already has its director and screenwriter. Sean Durkin, of Martha Marcy May Marlene fame, is attached to direct, and Suffragette's Abi Morgan has been tasked with writing the screenplay. Paramount Pictures' Little House on the Prairie will be based on NBC's television series, not Wilder's books, much to readers' disappointment.

Fans of Laura Ingalls Wilder's beloved book series know that the Little House on the Prairie TV show was only a loose adaptation of the source material. Named for the second installment, but based on the fourth, the show centered on a short and fragmented period of the Ingalls clan's travels across the Midwest and Great Plains.

The family moved to Plum Creek, near Walnut Grove, Minnesota, in Spring 1874. In Fall 1876, they moved to Burr Oak, Iowa, where Pa ran a hotel, and youngest sister Grace was born. Sometime in 1878, the Ingallses moved back to Walnut Grove, only to relocate to the Dakota Territory in September 1879.

Wilder summarized this period in On the Banks of Plum Creek. The fictionalized version of her family never moves to Burr Oak. Instead, Wilder skipped over her year in Iowa, and By the Shores of Silver Lake begins with the family in the Dakota Territory in 1879. In 2002, Cynthia Rylant wrote a companion novel to fill in the Ingallses' year in Burr Oak: Old Town in the Green Groves .

NBC's Little House on the Prairie might have taken more liberties with its source material than Wilder did with hers. On the show, the Ingalls clan never lives in a sod house. Laura meets Almanzo Wilder in Walnut Grove instead of De Smet, South Dakota. Oddly enough, the television version of Wilder's family does, in fact, move to Burr Oak near the series' end.

Although it would be great to see a faithful adaptation of the nine-book series or Wilder's autobiography, that isn't what we're getting this time around. Still, more than 30 years after NBC's series arrived at its bizarre finale, one thing's for certain: The movie doesn't have to do much to be better than the show. If they can avoid blowing up Walnut Grove, all should be well.

More like this
The 20 Best Audiobooks To Fall Asleep To
By Aoife Hanna and K.W. Colyard
Conversations With Friends' Endometriosis Scenes Are As Brutal As It Gets
By Ivana Rihter
Watch The Emotional Trailer For Dolly Alderton’s 'Everything I Know About Love'
By Bustle UK
'Bridgerton' Season 4 Will Likely Focus On This Brother's Divided Heart
By Grace Wehniainen and Alyssa Lapid
Get Even More From Bustle — Sign Up For The Newsletter