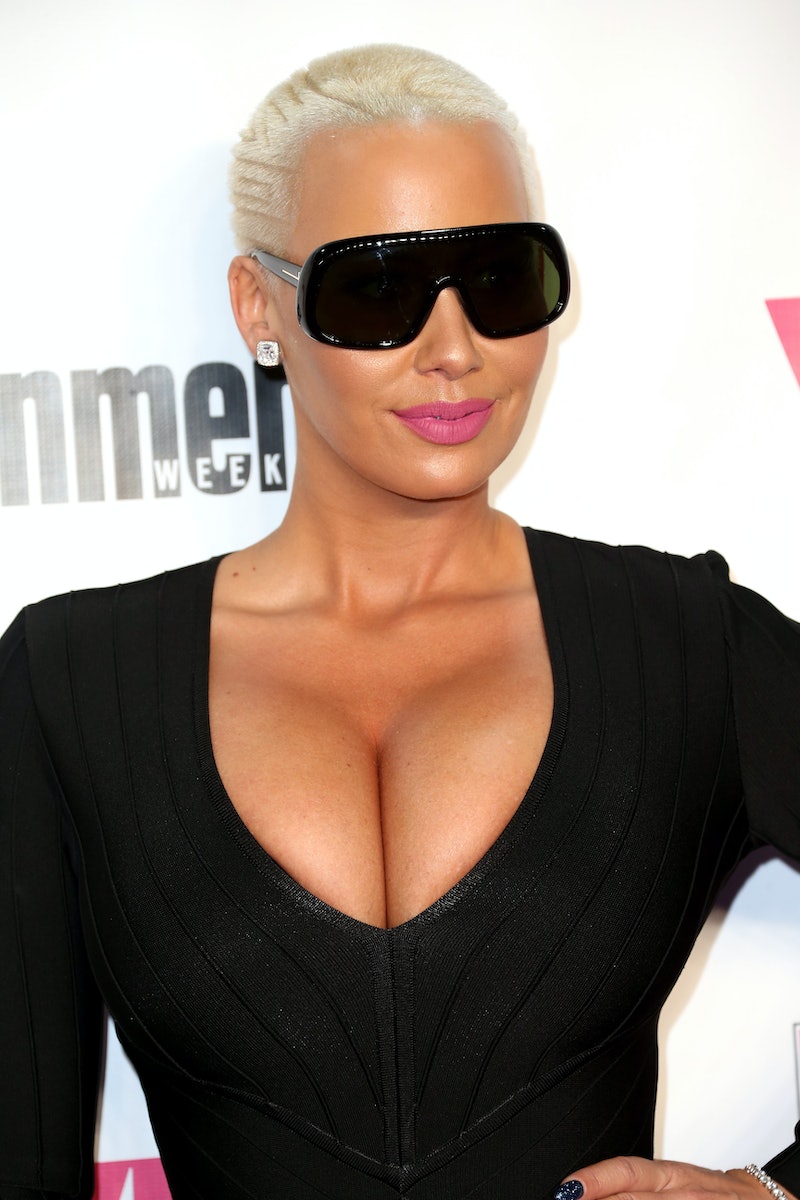 When describing Amber Rose, the phrases "soft-spoken" or "shy" would never come to mind. And that's not a bad thing — it just means the model isn't afraid to stand up for herself. This is exactly what happened on Wednesday after Kanye West's Twitter rant targeted at Wiz Khalifa. As the ex of both West and Khalifa, Rose became involved in the whole debacle when West said some pretty derogatory things in his since-deleted tweets, including calling her a gold digger. Rose was quick to respond with some disses toward West and their sexual history. While her tweets were NSFW, the very next morning Rose published an empowering essay on TIME 's website called "How I Learned To Stop Caring What People Think." Throughout the piece, she raises some important points that everybody can learn from. Here's one of her most powerful lessons:

Before you judge someone—especially another woman—put yourself in her shoes and also look at your past. That’s what a lot of women fail to do.

This part of the essay is where the 32-year-old really hits the nail on the head. It's so easy to look at someone else's life and cast judgment, especially when they're famous. But just because celebrities are in the spotlight doesn't mean you know their full story or that they should be an easy target. Plus, anyone who's casting judgment isn't perfect either — no one is. That's the overarching theme of her piece. Rose acknowledges that everyone makes mistakes, and as she perfectly puts it, "Does that make you a ho? No, it makes you a human." There's no need to throw derogatory terms at someone just because they make a mistake or two.

Rose is no stranger to insulting phrases. She admits she first had the word "slut" hurled at her back in high school, and she's frequently torn down not just by her fellow females, but men as well. Although others judge her for her past as a stripper, Rose has learned to embrace it and own it. Remember that amazing moment when she and Blac Chyna stood up to slut-shaming by writing phrases like "gold digger," "whore," and "slut" all over their VMAs outfits? By reclaiming these words, she's reminding others that they can't tear her down.

Dealing with double standards is another highlight of the essay, where she talks about being shamed for her sexuality, while her male counterparts were praised. Rose gives the example of what happened when she and Wiz Khalifa got divorced. She says she was called a "ho" for going out on a single date, while he was applauded for hanging out with a group of women.

Luckily, Rose had an important epiphany, realizing she didn't need to keep explaining herself to other people. She says,

What I’ve realized is that, when you care too much, you’re not living at your full potential. When you really stop caring about what people say, that’s when you really start living. It’s such an amazing feeling. It’s about loving who you are, owning who you are and knowing that it’s O.K. to live your life how you want to live it ... I want to help women just be happy in their own skin.

Seriously, that's such an awesome message to spread. It's impossible to please everyone, and once you realize that, it can be easier to learn to love the person you are. Plus, I love that she wants her words to resonate with other women. She's essentially spreading the message to not only avoid judging others, but also to stop judging yourself.

Overall, Rose's essay is eye-opening and empowering. Sure, people may not always agree with how blunt she can be on Twitter, but she's just being herself. And you know what? More power to her!

For more feminist content from Bustle, check out the video below!