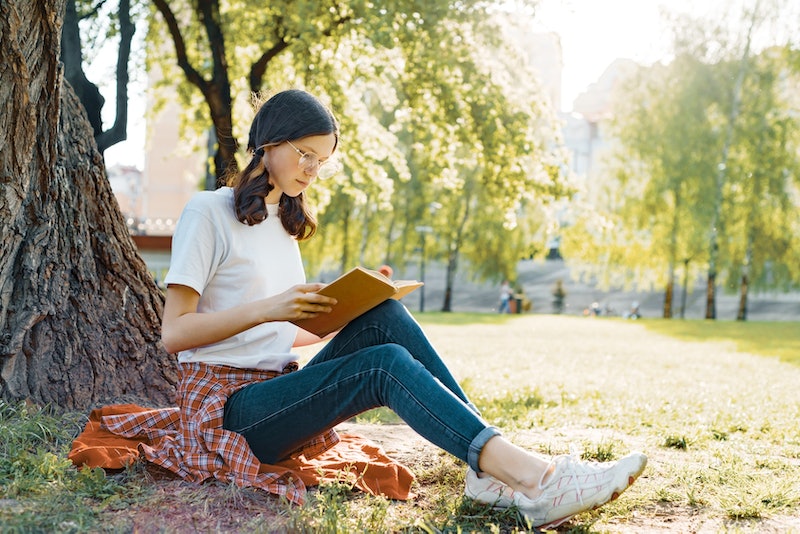 Nicktoons. Halloween. Chocolate milk. There are some things you just don't outgrow. Reader communities are on the fence about whether it's appropriate to read children's books as an adult, but I'll admit it: there are some books #IllNeverBeTooOldTo read.

Whoa. Sudden hashtag is sudden. Where did that come from? As it turns out, folks have taken to Twitter to talk about the things they'll never outgrow, using the #IllNeverBeTooOldTo hashtag.

I love this hashtag, mainly because I grew up hearing all about how I would outgrow all the nerdy things I loved, such as anime, video games, post-hardcore music, and trading card games. While it's true that I might not be current on my anime watching and post-hardcore listening, and that I don't have as much time to devote to playing video games and card duels, I still love and enjoy all of these things. I grew up, but I didn't outgrow them.

Like those reader communities I mentioned before, I am on the fence about reading middle grades and young adult novels as an adult. I'm a grown up who reads — mostly — adult books, and I'm OK with that.

However, there are some books that #IllNeverBeTooOldTo read, and there are other, newer titles for young people that really shouldn't go overlooked by grownups. This is a list of both.

Translated into more than 230 languages since its publication in 1943, Antoine de Saint-Exupéry's The Little Prince is a classic fable about a crashed pilot who meets a remarkable young space traveler.

2. The Blossoming Universe of Violet Diamond by Brenda Woods

Violet's father died before she was born, leaving her the only brown-skinned member of her white mother's family. Tired of people assuming she's adopted, Violet sets out to connect with her father's family and discover her heritage.

3. The Phantom Tollbooth by Norton Juster

Milo is pretty jaded until a strange tollbooth appears in his room one night and allows him to travel to the Lands Beyond. You'll rediscover your own childlike sense of wonder when you read The Phantom Tollbooth as an adult.

Liesl's wicked stepmother keeps her locked away in the attic. One night, she meets a ghost named Po who comes from the Other Side. Together, they hatch a plan to escape from the attic and give Liesl's father a proper burial. But a mistake made by a lonely alchemist soon complicates an already complex situation.

I don't know many people who read Anne of Green Gables as children and don't have fond memories of it. Sure, reading Anne's story is a little bit different when you're older and wiser than she, but it's still a fun — and funny — time.

6. In Real Life by Cory Doctorow and Jen Wang

Anda plays Coarsegold Online, a massively-multiplayer online roleplaying game that allows players to kill gold farmers — players who launder real money by selling in-game items and currency — to collect the bounties on their heads. When Anda discovers her online buddy, Raymond, farms gold to make his living, the morals of gaming begin to blur.

7. Roll of Thunder, Hear My Cry by Mildred D. Taylor

Mildred D. Taylor's classic novel about farmers in Depression-era Mississippi centers on 9-year-old Cassie Logan, whose family owns the land they farm, unlike their sharecropper neighbors. Roll of Thunder, Hear My Cry follows Cassie as she discovers the extent of the racism that surrounds her and learns to stand strong in the face of adversity.

Comic book nerd Flora teams up with a superhero squirrel named Ulysses in this quirky novel from Kate DiCamillo.

9. Capt. Hook: The Adventures of a Notorious Youth by J.V. Hart

Ever wondered what Captain Hook, Neverland's adult villain, was like before he grew up? If so, J.V. Hart's Capt. Hook is the fictional — and dramatic — biography you need to read.

Kymera's secret duty is to find the lost girls of Byre, a city controlled by an evil wizard. A young boy named Ren seeks her out and becomes her friend in this fairytale-esque novel from MarcyKate Connolly.

11. Little House in the Big Woods by Laura Ingalls Wilder

Generations of children have grown up with Little House on the Prairie, but Laura Ingalls Wilder's 1932 novel, Little House in the Big Woods, is where it all started.

12. Up to This Pointe by Jennifer Longo

Harper has lived her entire life planning to be a ballerina, but when that doesn't work out, she packs her bags and ships off to Antarctica to flex her scientific muscles — and heritage — at McMurdo Station.

Eleven-year-old Mimi's poems carry the narrative in Marilyn Hilton's Full Cicada Moon. In 1969, half-black, half-Japanese Mimi moves to a town in Vermont where nearly everyone is white, and no one notices anything other than her skin.

14. She Wore Red Trainers by Na'ima B. Robert

This romance novel from Na'ima B. Robert centers on Ali and Amirah, two young Muslims who fall in love and try to keep their relationship within the bounds of their faith.