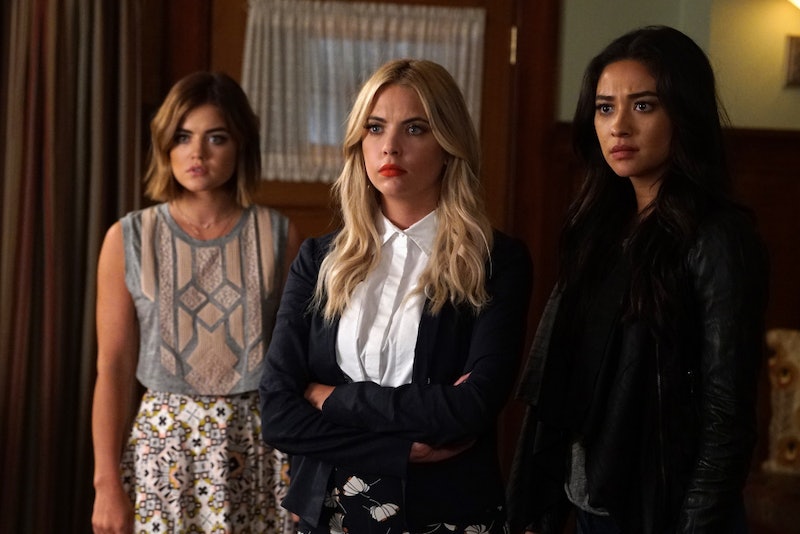 After weeks of waiting, last Tuesday's episode finally treated fans to their first official Uber A sighting on Pretty Little Liars . And while the scene may have only lasted a few precious moments, it still left us with a ton of brand new questions regarding this new A's endgame. After panning over all of Charlotte's former A-centric possessions (creepy Alison masks and all), we saw our new Big Bad dump the iconic black hoodies in the trash and take to the internet to google the term "uniforms." Clearly, this is meant to signify the start of our new villain's reign of terror, but that leaves us curious viewers to wonder: what exactly will Uber A's new uniforms look like?

For the past five and half seasons those hoodies have become a symbol of A's wrath. At this point, we've basically been programmed to have nightmares about that particular item of clothing. But now that they're going by the wayside, that means A's wardrobe is about to make some serious adjustments. So what new clothing should we be expected to fear next? Given that the word "uniform" is a pretty broad term, that doesn't really give us too much to go on. However, that's not going to stop me from making a few educated guesses of my own in the meantime.

Whoever Uber A is, he or she is obviously interested in tracking down Charlotte's killer and having them pay for their crime. That means some serious detective work is in order, so having a police uniform would definitely come in handy. And given the not-so-stellar job the Rosewood police have done in the past, I'm willing to bet Uber A could manage to infiltrate them with ease.

Now that Radley is a hotel, it would make sense for Uber A to want to keep close tabs on the establishment, especially since that's where the Liars were congregated on the night of Charlotte's death. And we already know that somebody has been watching the Liars from afar. Having a hotel uniform would be the perfect way to blend in and figure out what exactly they were all up to that night.

When Uber A sent that text message to the Liars, it was signed with a red devil emoji. Was this just an off-hand way of showing the girls that he or she means business? Or was it perhaps a clue regarding the pending wardrobe upgrade? PLL may decide to take a leaf out of Scream Queens' playbook and have their Big Bad dress in a devil costume.

They're Actually For The Liars

We know how much Charlotte enjoyed dressing the Liars and thinking of them as her own personal, real-life dolls. Maybe this new A has a similar way of thinking, which means the uniforms are actually for the girls instead. (Did anyone else just feel a chill run up their spine?)