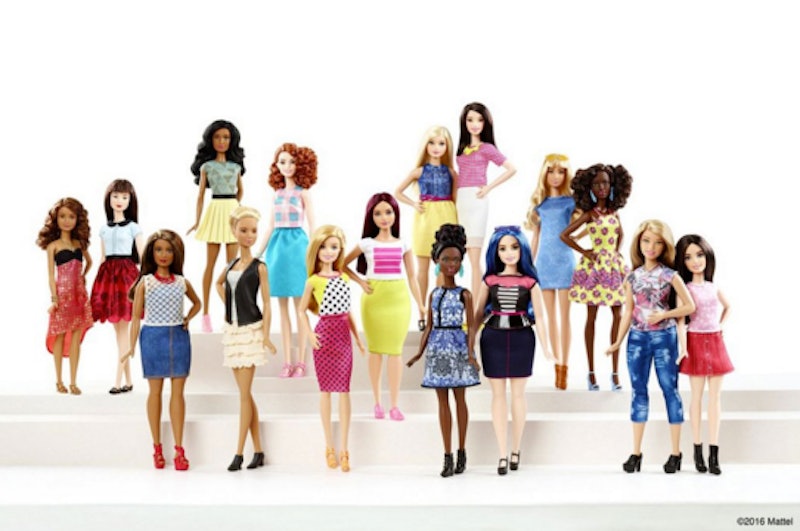 On Jan. 28, Mattel announced the launch of new Barbie types, which will promote diversity and represent a broader range of body types and races. Barbie, which has been white and unrealistically since its birth in 1959, is finally getting a more body positive makeover? #TheDollEvolves is right. "Girls everywhere now have infinitely more ways to play out their stories and spark their imaginations through Barbie," the company stated on their site. "Along with more overall diversity, we proudly add three new body types to our line."

With Barbie now coming in "curvy," "tall," and "petite," Mattel is not only making efforts to reflect the real proportions of a feminine human, but also making strides to represent a broader scope of these bodies. There's also an addition of multiple dolls of color with differing hair textures, beginning to raise the ratio (at least a little bit) of Barbies of color to white Barbies.

It's endlessly exciting to see the doll many of us played with through childhood to evolve into something that is more representative of the children playing with them. Now, Barbie dolls may be one of the new ways we can introduce body positivity to our kids early on in life. Of course, the new line could still do more to represent an even broader scope of bodies. But overall, 2016's Evolution of Barbie is groundbreaking, and paving the way for more change and reform regarding beauty standards for kids. Here are some of the ways the new Barbie is endlessly important.

1. Moving Away From Societal Standards of Beauty

Barbie has always been the quintessential example of what is harmful about beauty portrayals in the media. Between Barbie's unrealistic proportions, her hyperfeminine presentation and her arched feet (which are perpetually ready for high heels), the doll has certainly reflected gender and beauty standards that were the most widely accepted during the 1950s. However, the recent changes made to the doll, which has essentially looked the same since it was first launched, certainly reflects a radical enough shift in beauty standards in our society and an increase in demand for more diversity. Last year, Barbie's foot was flattened, and now she's coming in a variety of sizes, colors, and hair types. Thankfully, she's finally getting up to speed in the diversity department. I mean, it is 2016.

2. Body Positivity Early On is Key

Body image issues begin so young, and are only perpetuated by the dolls children play with. Kids are very much affected by the images they surround themselves in (just as much, if not more so, than the way we adults are affected by body negative imagery). When kids, especially young feminine people, see Barbie with her impossible proportions, high heels, and long blonde hair, it can arguably influence their idea of femininity (whether consciously or subconsciously). And when children of color don't see their bodies reflected at all, it doesn't exactly inspire self love or confidence. Thanks to Barbie, our kids and future children will be able to see themselves in the dolls they're playing with, as well as appreciate the beauty of bodies that are different from their own.

When I saw that there would be new body types added to the line, I was a bit afraid that representing a diversity in bodies could translate to total lack of plus size dolls, or even skinny shaming (since the original doll, while ridiculously proportioned, was technically thin). However, the new body types reflect a good variety, including thin tall women, curvy women of a medium height, and petite women. We may have a long way to go before Barbies reflect those who have tall fat bodies, curvy petite bodies, or bodies over size 12. But since this is Mattel's first dip into the pool of body positivity and diversity, I think they're off to a good start.

Barbie isn't the only doll that is historically whitewashed. With just a browse of their respective websites, you can easily see that companies such as American Girl Doll and Baby Born also have a huge diversity problem. The latter has exactly one doll of color, which is labeled as "Ethnic." Children deserve to see themselves in their dolls, which is crucial in order to foster any kind of body positivity early on.

Barbie's addition of more dolls of color to their collection is excellent, as they increased the ratio of dolls of color to white dolls to about 1:3. There is still room for improvement here, obviously, regarding the ratio and representation of other races. But Barbie is setting a great precedent for an industry that normally a single representation of color, if any at all, in their collections.

5. It Sets The Precedent For Further Diversity

Mattel making this decision to reflect more types of bodies in their dolls creates hope for further diversity to be achieved. Dolls reflecting people with gender identities besides "cis woman," or besides the able-bodied portrayal of beauty we're used to seeing, would be oh so refreshing. Since we have the power to affect the body image of little ones through the dolls they play with, it would be amazing to normalize gender nonconforming identities and bodies with disabilities for our kids so that their definition of beauty is can always be expanding.

These new Barbies, with realistic bodies and greater race representation, give me so much hope that I might get to see a trans or disabled Barbie in my lifetime. For now, I'm stoked to see these new dolls in stores. And even as a 21-year-old who doesn't play with dolls anymore, I plan to buy one to make amends with my younger self, who thought impossibly proportioned feminine bodies were the definition of beauty.

More like this
I Tried Kendall Jenner's No-Pants Look As A Plus-Size Woman
By Sarah Chiwaya
24 History-Making Black Women You Probably Didn't Learn About In School
By Ayana Lage and JR Thorpe
42 Black Owned Fashion & Beauty Brands To Support Today & Always
By Mekita Rivas, Shea Simmons, Kui Mwai and Dominique Norman
12 Anti-Valentine’s Day Memes For People Who Are So Over Romance
By Meghan Bassett
Get Even More From Bustle — Sign Up For The Newsletter
From hair trends to relationship advice, our daily newsletter has everything you need to sound like a person who’s on TikTok, even if you aren’t.