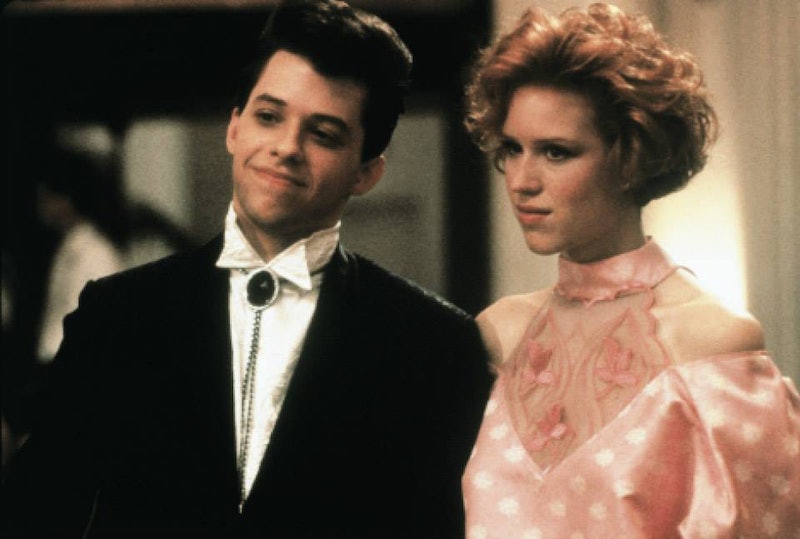 Pretty in Pink was my very first John Hughes movie. My introduction to the classic '80s high school movies was Molly Ringwald as Andie, a girl from the wrong side of the tracks falling in love with the spoiled rich kid, Blane (Andrew McCarthy), despite having a BFF Duckie (Jon Cryer) who loves her. I related to Andie, an outcast who didn't fit in with the cool kids and didn't want to, and I was, obviously, insanely jealous of her unique sense of style. I loved everything about this movie. As the years went by, I watched more '80s movies, like The Breakfast Club and Sixteen Candles, but none of them ever beat Pretty in Pink . Watching those movies did, however, make me realize how little the movie actually makes sense. There are so many things that bother me about Pretty in Pink , even though I adore it.

These bothersome items range from the obvious (huge time gaps) to the extremely subjective (was Duckie really a viable romantic option for Andie?). What ties them together is the remarkable fact that they don't matter. No matter what details make me say "huh," Pretty in Pink is a classic and is still beloved, as evident by it's upcoming theatrical re-release celebrating the movie's 30th anniversary. (It's going to be playing on Valentine's Day, for all you fellow lonely hearts out there.)

1. Is Blane Some Kind Of Computer Genius?

Let me preface this by saying that I have no idea how computers work. Now, how does Blane send Andie those IMs? More importantly, how does he know how to do that? That was absolutely not a thing in the '80s? They would also probably need the internet for this, and I'm guessing public school didn't have that kind of access to be an early adopter. And beyond all that, Andie seems really surprised to get the messages, so, it doesn't look like it was a common practice. It's also never explained how or why Blane chose to communicate with Andy via computer hijacking.

2. Why Does Blane Take Andie To A Party For Their Date?

Blane is not dumb, so why does he decide to take Andie to a popular kids' party on their first date? He must have known it was a horrible idea — one that would end with his friends being awful and Andie being uncomfortable. What ever happened to taking a girl out to dinner?

3. How Is Duckie An Actual Romantic Option?

I know that a lot of people out there are #TeamDuckie, but you have to admit, he's kind of a jerk to Andie. Yes, he loves her, but he knows that they are just friends, and yet he's completely unwilling to support her going out on one date with Blane — one date! He even tries to shame her out of it. It's a pretty dick move, if you ask me. Either be a friend or don't, but don't pretend you're acting in your friend's best interest when you're really just sulking.

4. Why Is Blane Friends With Such A Jerk?

Steff (James Spader) is basically the devil of this high school movie. He's cocky, arrogant, rich, and cruel. OK, so maybe the question isn't why he's such a jerk, but why Blane would even be friends with him in the first place.

5. Does Iona Not Have Any Other Friends?

Don't get me wrong, I love Andie's quirky boss, but it does seem strange that this grown woman wouldn't have any friends her own age. I mean, it's one thing to be friends with your employees, it's another to kiss a teenager at a club on a weekend. Just sayin'.

OK, this one has always bugged me. There's a scene in Pretty in Pink when Andie and Blane are shown sharing a picnic in a random barn, and I just don't understand. Who chose to go there? Are they allowed in a barn? Why are they just sitting around a bunch of hay? Also, soon after this scene, the two break up, even though they were supposedly in love, but this is only like their second date. How did they fall in love so fast? How much time has passed since their first date? What is happening?

7. Why Does Andie Forgive Blane?

Blane basically ghosted on Andie after asking her to prom, and only because Steff told him to. He's really pretty weak, so why does Andie forgive him so easily in the end? Whatever the reason, I'll let it slide because I love happy endings too much to hold Blane accountable for his awfulness.

So, there you have it. Pretty in Pink may be a flawed movie, but it's still one of the best around. And, hey, no love story is perfect, not even one written by John Hughes.