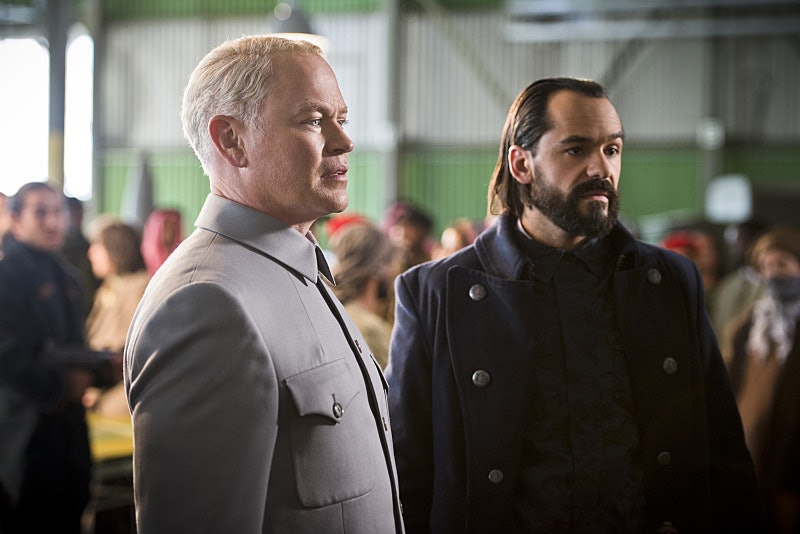 We may only be two episodes in, but Legends of Tomorrow is wasting no time in adding another Arrow crossover into the mix. Because one major Big Bad clearly isn't enough for this series, Damien Darhk made a cameo appearance on Legends of Tomorrow when the team tried to infiltrate a nuclear weapon bidding war. (Obviously he was one of the bidders.) But here's the intriguing thing — Darhk looked exactly the same age as he does on Arrow, even though our Legends were all the way back in 1975. So does this mean that Damien Darhk is immortal like his fellow villain-in-arms, Vandal Savage?

Anyone who watches Arrow (which is probably most of you given that this is a spin-off of the series), knows that Darhk possess some form of powers and special capabilities. And while Arrow is less prone to dabble quite so heavily in the supernatural like it's Flash counterpart, there's definitely more to him than meets the eye. According to the DC Comics, Darhk gained immortality after receiving blood from Deathstroke's ex-wife, Addie Wilson. And given that Darhk was closely connected to Ra's al Ghul — who also had a knack for not aging — then it makes sense that he would possess similar traits, even if it's not necessarily gained by the same exact means.

It's also worth noting that in the comics, Darhk was fatally shot by Savage right before becoming immortal. So considering the fact that these two men felt more like allies than enemies at this point in time, it might be safe to assume that Darhk hasn't yet received any of his abilities yet. He could just be human. When Oliver stands over the mystery grave in the flash forward, he vows to kill "him" (which we assume to mean Darhk). Perhaps the key to bringing him down lies in what information these Legends are able to learn about him from back in the day. The plot thickens...