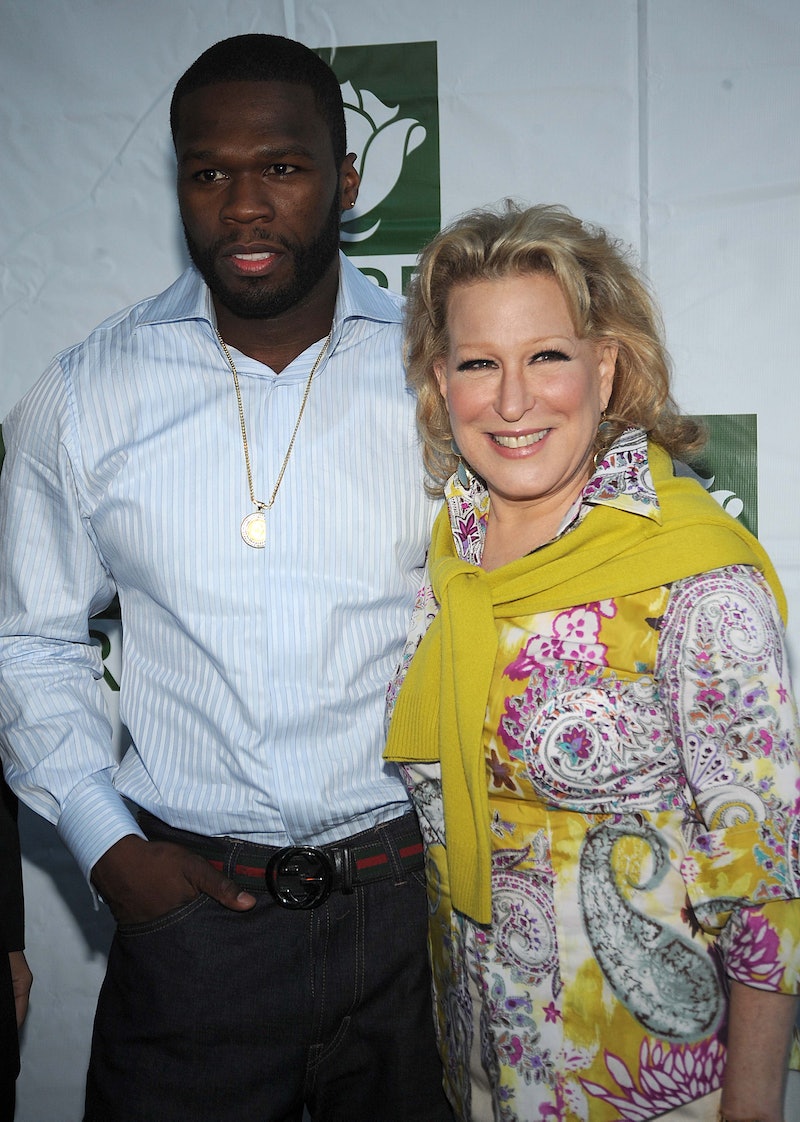 Throughout time, the world has witnessed some truly epic celebrity friendships. From Jennifer Aniston and Courteney Cox going from sitcom besties to real life best friends forever, to Taylor Swift and her #squadgoals, celebrity friendships are impossible not to love. They’re the friendships that inspire us, give us slight envy, and mostly make us want to be part of their team. Then there are the ones that make us scratch our heads and wonder what, exactly, these two people could possibly have in common.

Sure, it makes perfect sense that celebrities would form friendships with each other — after all, celebrities are people, too, so they’re naturally going to hang out with the people they work with, live near, and meet at events (even if those jobs are high-profile movie sets, the town is Hollywood, and the events are ultra-glamorous awards shows). Just like you and I form bonds with our coworkers over which TV shows we’re hooked on or how our boss is driving us crazy, so do our favorite celebrities. But sometimes, these pairings are kind of unexpected, slightly inexplicable, or just downright bizarre. Here are the weirdest celebrity friendships of all time.

On the surface, it doesn't seem like this friendship is too unusual. It's true that both are pretty famous young stars in their respective fields, so it makes sense that they might have a lot in common. But when you think about the fact that Williams's other BFF is Lena Dunham (proud member of the Swift golden squad) and that Perry and Swift definitely have some "bad blood," well, things could get a bit awkward. Or maybe it's because Perry has such an over-the-top persona, and paired with the much more reserved and demure Williams, that makes this such an unlikely bond. Either way, Perry and rumored boyfriend (and Swift nemesis) John Mayer attended Williams' nuptials last fall, so these two are tight.

In 2002, Moore was still a sugary sweet pop star turned romantic comedy actor, and Osbourne was known for her brazen hair color choices and penchant for four-letter words, so it seemed very unlikely that these two would form a friendship. But these two were totally tight, even posing for the cover of Elle Girl together in 2002.

On the surface, this one definitely seems strange because Olsen and her equally famous sister seem to shy away from the spotlight at all costs, while West... well, we all know how much he loves attention and publicity. So when these two were spotted hanging out and the twins attended his fashion show, people were very confused. They were even rumors of them hooking up, with West penning a lyric in his song "N***as in Paris" to the ladies Olsen. But when we remember that they do share one passion in common (fashion, duh!) it actually makes a lot of sense. Perhaps one day we'll see a Yeezy x The Row collaboration?!

The domestic goddess and the legendary rapper wouldn't appear at first glance to have much in common, but hey, sometimes opposites do attract! They both attended the Comedy Central Roast of Justin Bieber. Plus, Snoop has appeared on her show a couple of times. He helped her bake brownies on the Christmas Cookie edition of her show, and once helped make mashed potatoes (above). It looks like these two have a blast together. I ship it!

Brand and Mirren met on the set of The Tempest back in 2009 and became fast friends, working together again on the 2011 film Arthur. Though there's a 30-year age gap between them, they only had lovely sentiments to share about each other, with Brand telling The Telegraph : "It's complicated. It's an unconsummated love affair. An erotic, intellectual tangle of emotions between a Dame and a vagabond. She is an incredible personality, very beautiful; ordinary when she needs to be, remarkable when required. I really love her and I respect her tremendously." For her part, Mirren called Brand "brilliant" and has sung his praises on numerous occasions. So sweet.

She's an award-winning actor and he's a beleaguered rap star, so it seems odd that they'd hang out. But apparently, they found the true meaning of friendship when hanging out at a Knicks/Lakers game in 2014. The duo certainly turned heads, but Streep was there with her husband. 50 joked on his Instagram that "things got a little gangsta," and they looked like they had an awesome time. Next time, invite me, guys!

Oh, if ever there was a celebrity friendship to ignite a flurry of controversy, it's definitely the eldest Kardashian hanging out with the Biebs. Kardashian was rumored to be rebounding from longtime boyfriend Scott Disick with the much-younger pop star, but Kardashian and Bieber, as well as sister Khloé have gone on record to say that they're simply longtime family friends. Sure...

Earlier in his career, Hill was known for taking on roles in goofball comedies like Superbad and 21 Jump Street, but his career has evolved into more serious fare, even winning him two Oscar nominations. Perhaps that's why he's now part of Pitt's squad. The two teamed up and both scored Academy Award nominations for their work in 2011's Moneyball.

This is definitely a head-scratching friendship given Em's penchant for anti-gay messages in his lyrics, but these two managed to find common ground through their passion for music, even performing together at the 2001 Grammy Awards.

The longtime supermodel/mogul and American Idol runner-up turned aspiring politician became friends after he appeared on her talk show in 2006. A few years later, Aiken gushed about his friend Banks to People , saying,

These two found friendship through charity work, with each on hand to help support the other's charity events in 2008. Midler also joked that 50 would produce her next rap album, but so far, we haven't seen the fruits of their labor. I don't think I'm alone when I say that this needs to happen.

Rap fans were definitely curious when Foxx released his video for "Blame It" and it featured a brief cameo by Happy Days star-turned-director Howard in a sexy club party scene. The video featured plenty of famous faces, but it's Howard's wholesome image that was most notable. And the irony wasn't lost on Howard. He later told Entertainment Weekly,

I had no idea what in the world it was or what I was doing. I do not have a secret night-clubbing side. I’m the opposite of a big pimpin’ kind of dude. Probably the last time I was in a club was doing research for Night Shift in 1981. Discos, they were called then. When I saw the finished result I did ask around: "Is it OK that I did this?" I mean, I am one of the whitest men in the world. I like singer-songwriters. But I thought it was funny that I was in it. Jamie sent me a case of champagne and I asked him if I could now blame everything on the a-a-a-alcohol. I haven’t heard back from him on that.

What happens when a TV star once famous for her haircut and a pop star once famous for a hair flip team up? A surprise friendship of the ages! Though this is their only photographed outing, it's imagined that the two got to know each other through Bieber ex and Aniston friend Selena Gomez, which is another pretty odd pairing, if I'm being honest.

Snoop and Beckham are seriously close friends. The rapper discussed their friendship on BBC Radio back in 2011, and had this to say:

When I make my records, he’s one of the first people I send the record to before it’s done, even before the label get it. He’s a great father, a great husband and a great friend, I love our friendship and some people in life just come together for some odd reason. Me and him came together on one night and we just became friends and we’ve just been friends ever since.

I dunno about you, but I'm low-key obsessed with this pair of BFFs.

Age difference aside, this friendship shouldn't be too hard to imagine, given that both Lawrence and Jenner are mega-famous and seem massively fun to be around. Lawrence has copped to being a huge fan of Keeping Up with the Kardashians, and told the New York Times when she met Jenner her "knees buckled... it was the closest I've ever come to losing consciousness." Wow, girl!

Braff frequently waxes poetic about his love for the 1D crooner on Twitter, and it seems like their friendship is legit. In 2014, the actor explained that they are in a bromance on Watch What Happens Live! after they met through friends.

Though Paltrow is hardly known for her street cred, she's actually super close with the rapper and his wife Beyoncé after they met in 2006. They've gushed over each other multiple times, Paltrow's kids call him "Uncle Jay" (seriously!) and Paltrow even designed a handbag with Jay's nickname on it in 2015, in honor of her friend. They're lifelong besties, everyone.

Though some of these BFF duos seem unusual, I'd pretty much want to hang out with any of them. They're truly changing the definition of #squadgoals and it's flawless.