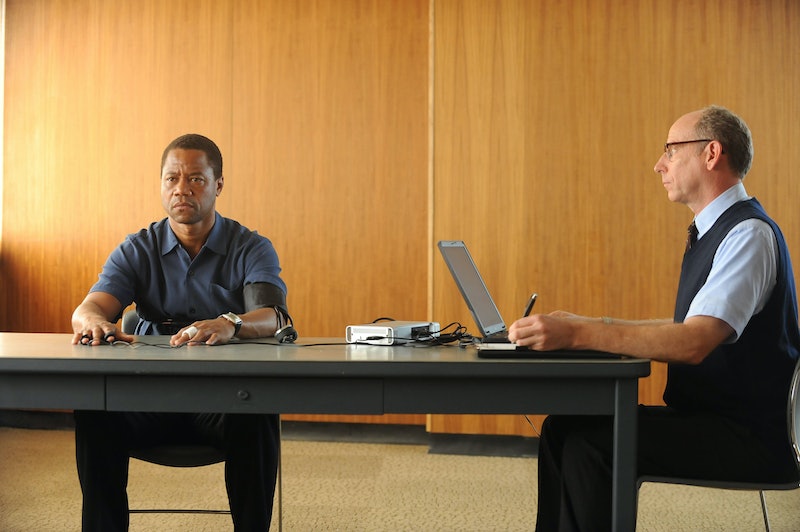 Ryan Murphy's TV shows aren't exactly known for their realism. Glee, American Horror Story, and Scream Queens all exist in similarly heightened states of reality, where elaborate production numbers, scathing monologues, and bloody excess are all the norm. So the über-producer might have seemed like an odd choice to helm FX's newest drama, true crime series American Crime Story: The People v. O.J. Simpson , which will focus on the trial of Simpson for the murder of his ex-wife, Nicole Brown, and Ronald Goldman, of which he was found not guilty. Given how many Americans are already familiar with the ins-and-outs of that highly publicized case, surely there's not much room for Murphy to riff and expand into his usual heightened universe, right? Just how accurate will American Crime Story be?

As explained on FX's website, American Crime Story is based on The Run Of His Life: The People v. O.J. Simpson , the 1996 book by New Yorker journalist Jeffrey Toobin that documented the case in great detail and to great acclaim. The New York Times review extolled the non-fiction work as "a comprehensive, professional account, unburdened by the self-justifications of parties to the case." Details about the series suggest that American Crime Story adheres tightly to Toobin's reputable account of the 1995 trial.

Screenwriters Scott Alexander and Larry Karaszewski, who previously collaborated on several feature films including 1996's Oscar-nominated The People vs. Larry Flynt, adapted Toobin's book to the small screen. "We did tons of research," Alexander told Entertainment Weekly for the magazine's recent cover story on the new series. "I think we're very proud of how close we stayed to the truth while creating drama out of recent history."

In order to aid with the realism, some of the cast even reached out to the real-life counterparts of the characters they were playing. Sarah Paulson told EW she had dinner with prosecuting attorney Marcia Clark, explaining, "I felt like I was meeting Meryl Streep or something ... Somebody I truly admired." And David Schwimmer, who plays defense lawyer Robert Kardashian, told the magazine he chatted with Kardashian's ex-wife Kris Jenner over the phone. "She was so warm and generous with her time," he said. "We spoke for a few hours in real detail because I wanted to know who he was as a husband and a father. He was a real family man, and he had a lot of strong values and ethics. There's a lot about him that I can actually identify with and relate to — especially the loyalty."

Vulture's review of the season praises American Crime Story 's historical accuracy, saying that "devotees of Toobin’s book will be struck by how much inspiration this series takes from his reporting, as well as its overall affinity for sticking to what actually happened rather than embellishing or inventing details — though admittedly, with a case this notorious, what would be the point of making stuff up?" However, the review also acknowledges that the series is a TV drama, not a documentary: "There are examples of what might be called 'composite scenes' in which information delivered over a span of days or weeks is packed into a moment … But for the most part, Murphy & Co. are content to mine this familiar material for pathos … and corrosive satire."

When discussing American Crime Story's very un-Murphy-like realism, it's important to note that this show is different from most Ryan Murphy productions in two very meaningful ways: he neither created it nor wrote it. In fact, this is the first TV show Murphy has ever worked on that doesn't have his name attached to a "Created By" credit. That credit goes to Alexander and Karaszewski, who also co-write most of the episodes. Instead, Murphy is only executive producing the series (along with his frequent partner Brad Falchuk) and directing the first two episodes.

Still, something about this project caught Murphy's interest enough for him to want to get involved. According to EW's cover story, after Alexander and Karaszewski pitched their adaptation to FX, Murphy's agent slipped him the scripts, knowing that he was "seeking a challenge after directing HBO's The Normal Heart." Although the show was first slated for production at FX's sister network FOX (home to Murphy's Glee and Scream Queens), it "got stuck in development, so network co-head Dana Walden suggested Murphy take the project to FX" and set it up as a companion series of sorts to his other immensely popular anthology show, AHS.

"What I loved about those scripts was how much I didn't know," Murphy told EW. "That was the hook for me. There was something prescient about them," he said in reference to the Ferguson riots that were occurring while American Crime Story was in preproduction. "We were shooting stuff that had already been written months before, and we were like, 'Wow, the more things change, the more things stay the same.' It was heartbreaking. I think all of us felt an obligation to get that stuff right." Viewers will see how right they get it when American Crime Story premieres on Tuesday night at 10 p.m.