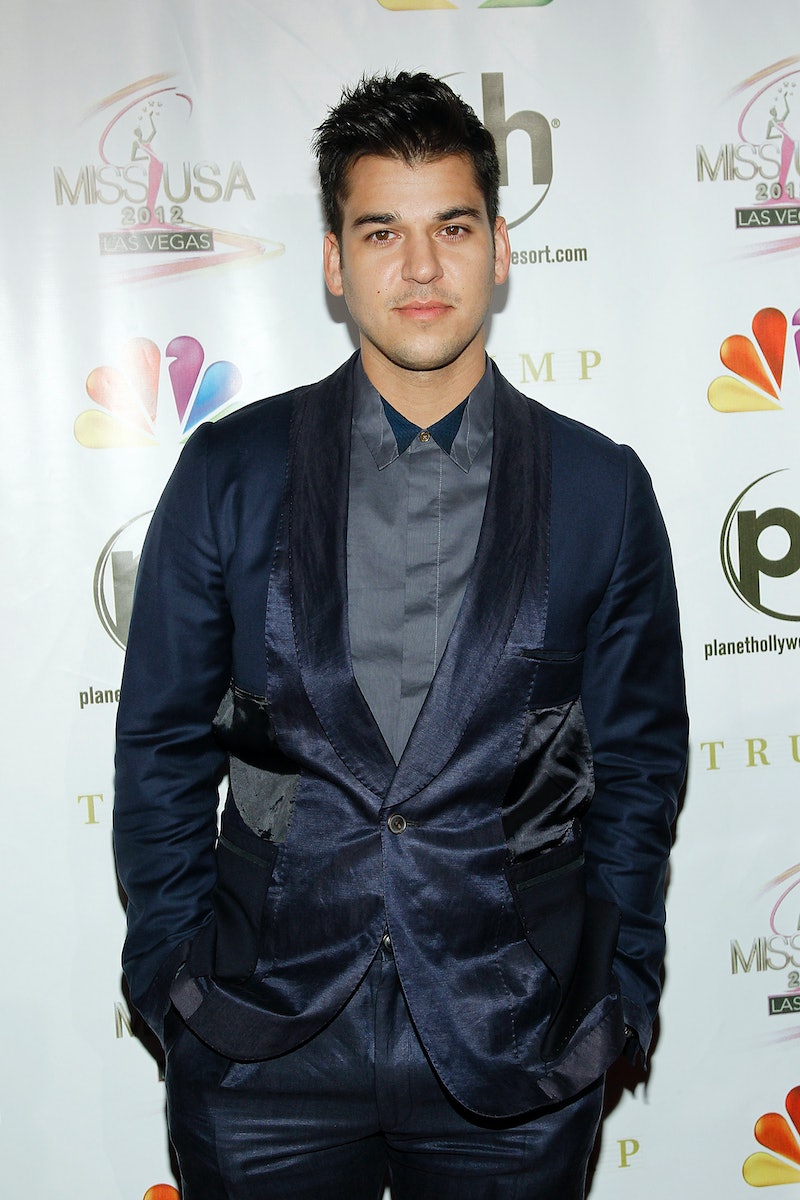 From the moment the Internet found out that Rob Kardashian and Black Chyna were a thing, there has been no chill. Not only were the shocked reactions as loud as the chatter, but Rob and Chyna's relationship has already weathered some crazy moments — and they've only been together for about two weeks. Is the world ready for a Kardashian relationship with this level of high-intensity drama?

From that very first 'gram that essentially announced the start of their relationship (you know, the one of them cuddling that Chyna literally captioned "the beginning"), it was clear that there was going to be nothing calm about Rob and Chyna's romance. But what no one really expected (and by "no one" I, at least, mean me, and I quite literally gasped in surprise and said "What?!" out loud to myself when I saw the news) was just how cray things would get in a one-week timespan. Besides the obvious awkward scenario here (that would be the fact that Blac Chyna is the ex-fiancée of Tyga, the boyfriend of Rob's half-sister Kylie Jenner), there's already been at least one arrest, multiple Godfather references, and a grand, sweeping gesture that involved Rob driving approximately 1500 miles to prove his devotion.

Check out the craziest moments of Rob Kardashian and Blac Chyna's relationship so far.

You know that song about voluntarily walking 500 miles to see the person you love? Rob instead hopped in the car and reportedly drove 26 straight hours (and roughly 1500 miles) to Austin, Texas, to pick up Blac Chyna after she was arrested for alleged public intoxication at the Austin airport over the weekend.

Which brings me to my next point...

According to TMZ, Chyna was at the Austin airport on Friday, Jan. 29 and had just boarded a flight to London when she allegedly got into a verbal argument with a flight attendant. The model appeared to be "heavily intoxicated," an eyewitness claimed to TMZ, and was reportedly handcuffed and arrested before takeoff. The site reports that she was charged with drug possession for allegedly having two ecstasy pills on her. Bustle has reached out to Chyna for comment, but has not yet heard back.

(Update: Blac Chyna's rep tells Bustle that "At this present time Blac Chyna has no comment but is currently focusing on her career & future endeavors.")

There is literally so much to unpack in this weird "love square" it's unreal. Let's begin with the fact that Rob is dating his half-sister's boyfriend's ex-fiancée. Not only are Tyga and Chyna not on the greatest terms, Kylie and Chyna have been known to throw some shade at each other as well. And then there's the fact that Tyga and Chyna have a son together, making both Kylie and Rob some kinda step-parents-in-law or something. Rumor has it that Kylie is pissed about Rob and Chyna's romance, but ironically, one of the chillest reactions to their relationship has been Tyga's, who diplomatically told E! that "everybody deserves to be happy." Hmm.

There's no doubt that Khloé is the closest Kardashian to Rob, repeatedly rooting for him and allowing him to live with her while he gets his life together. But soon after news broke that Rob and Chyna were dating, Khloé ~menancingly~ quoted the Godfather not once, but twice. To be fair, the first time she used that "You can do anything. But never go against the family" line, she claimed she was referring to someone else in her fam. But upon learning the truth, she said the quote could also apply to another family member.

"But hey, maybe my quote can go towards a few people today," she tweeted (and then deleted) after fans stormed her with evidence of her brother and Chyna. Khloé later used the same quote in a photo of her sisters in a recording studio, which you can check out above. Oh, the shade.

As soon as Blac Chyna left for the airport on Friday (the same trip where she ended up getting arrested), Mama Bear Kris Jenner reportedly booked it to Chyna's house to talk to Rob about the situation. And clearly, Kris Jenner means business. No word on how things went down between the two, but clearly Rob is intent on staying with his girl — because he later drove halfway across the country to rescue her.

Amidst all the "OMG ROB AND CHYA ARE DATING" drama, Rob apparently decided he'd let everyone know that he sees their reactions and he's going to poke fun at them for it — by posting a meme about Chyna having his baby. So meta. So confusing.

If this is the type of drama that has gone on after just a week of going public with their relationship, one can only imagine the level of shenanigans that'll occur if this romance lasts. Brace yourself.

More like this
Kim Kardashian & Pete Davidson Took A "Very Romantic" Couples Trip To Tahiti
By Jordyn Tilchen and Bustle Editors
Selena Gomez Is Fine Being Single, But She Still Manifested Romance On 'SNL'
By Martha Sorren, Jake Viswanath and Jack Irvin
Ralf Little’s Fiancée Has A *Very* Impressive Resumé
By Sam Ramsden
Eva Mendes Just Claimed Ryan Gosling’s “Ken” Underwear
By Rachel Mantock
Get Even More From Bustle — Sign Up For The Newsletter