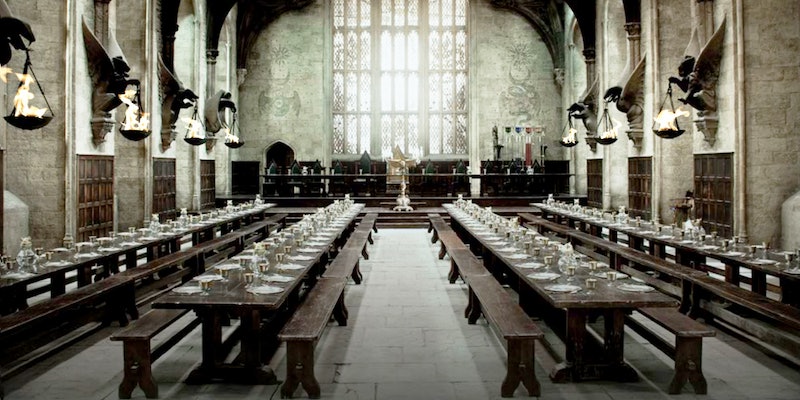 My worldview basically shifts every time J.K. Rowling breathes, so you can imagine the visceral shock of finding out non-magical people in the US are called No-Majs. But now we No-Majs have been delivered one more blow, in the form of the North American Wizarding School, dubbed Ilvermorny. With very little to go on, you can't blame local Potterheads for wondering: what does Ilvermorny mean? Like, I am willing to accept anything you decree as gospel, J.K., but I also need some answers if the name of this fictional school I can't attend is going to sound vaguely like someone hocking a loogey.

I personally have been squinting at it for a few days, and my first impression is that it shared a lot of letters in common with "I Love New York" — but that's just me delightfully perpetuating the cliché that New Yorkers think the world revolves around them ('sup). The rest of the info that Rowling gave us on Pottermore doesn't give us a lot of guessing wiggle room, either. We know that it's located in the northeastern part of the United States (s-s-s-suuuuck it, everyone else), but it's rather large on the map, and could be in any number of states up there.

Like, for all I know right now my NYC office IS Ilvermorny, and I'm dumbly chilling out right next to the secret Narnia-esque alley that students mill in and out of on the reg. There are some real nutters on this block, guys. I wouldn't put it past them.

But for theories that are more concrete and well thought out than mine, look no further than the theorists of Reddit, who actually have some logical brain thoughts on this matter. Here are Reddit user cukeygirl's thoughts on why Ilvermorny, a word that otherwise has no discernible origins, was given its name:

I've been pondering and thinking and racking my brain and searching google and I came up with a crazy theory. Il= Illinois

Each of these states has either a large lake or shorleline. Now I know that Verm. is not the abbreviation for Vermont ( it's VT ) but i figured Rowling wouldn't make it easy for us.

Also, since the visual we were given on Pottermore, shows us Ilvermorny on the map covering the Great Lakes, it makes me think the bodies of water are important.

Plus, remember how the schools of magic are ALWAYS hidden? What if by moving it from place to place (especially since America is such a big place geographically) it helps protect it and the states take turns hosting it each year.

I know I'm reaching and babbling but I just can't shake this theory...

The Iroquois were native to... Vermont and they were originally not one nation but a nation of five tribes: Mohawk, Onondaga, Oneida, Cayuga, Seneca. They joined together and held territory in mostly the Great Lakes area. Yeah it's reaching but it just a theory.

Those of us who are totally convinced are like:

But those of us who are still a tad confused are all:

Of course, like all theories, it has a few dissenters. One Redditor also mentions that the Iroquois are native to New York, not Vermont (although this information still supports the proposed theory). Others have chimed in with the idea that it might be mobile, or even on a ship on the Great Lakes, an idea that is a little bit supported by what appears to be waves (or possibly clouds) crashing onto the castle. Like all Potter-related things, I am sure Rowling will let us know in due course — but since it is so inextricably tied with the upcoming release of Fantastic Beasts And Where To Find Them, I'm guessing it might be a few months before we find out.