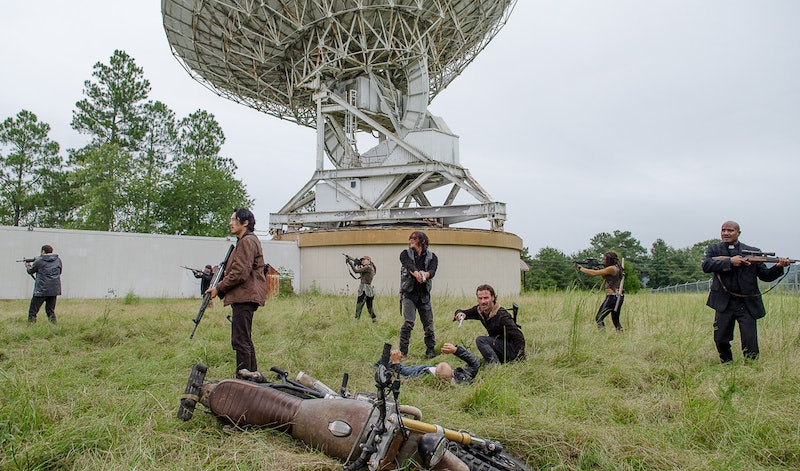 After a winter hiatus, AMC's hit zombie show The Walking Dead returned recently. The mid-season four finale had our cast of characters leaving the relative safety of the prison and scattering out in groups into the woods to escape the melee. As the cast broke up into small subsets, we got to witness how each group fared in the demise of the prison. Watching Darryl with Beth and Tyreese with the kids, I began to wonder who I'd want on my zombie-fighting squad.

I'm not the only one who has questioned Rick's leadership skills over the course of the show (Team Shane, anyone?), but unfortunately despite watching all the zombie movies, I myself am woefully under-prepared for a zombie apocalypse. However, if I could assemble my dream squad of YA heroes to surround myself with, we might have a chance of survival.

There are rules of course. We have to remove magical powers from the conversation, which means all witches and wizards (sorry, Hermione) and supernatural beings are blackballed. But if human and human-made technology are all that can assist us when the zombies take over, these six YA characters would make a formidable team of survivors.

Katniss Everdeen is a revolutionary inspiration. To truly survive the zombie apocalypse, humans are going to have to band together, rather than fight each other over land. (Looking right at you, The Governor and Rick.) Katniss can rile up other survivors to join us in the fight against the zombies with her three-finger salute.

But Katniss isn't all speeches; she's tough as nails. She has survived two Hunger Games in her short life, but she hasn't sacrificed her character to do so. She stuck by her District companion Peeta, even when he was pulling her down, and worked together with Finnick, Johanna Mason, and many others to get the job done. Plus, like her fellow zombie survivor Daryl Dixon, her bow skills are bar none.

With these skills, Katniss can not only take out attacking zombies, but bring home dinner, too.

Even if you take away her magical Lunar gift, Cinder's man-made technological advances make her a prime candidate for apocalypse preparedness. In Marissa Meyer's Cinder, the cyborg mechanic receives a robot arm equipped with a knife, screwdriver and other tools, which make Cinder not only an asset in fights, but when attempting to get in and out of locked places for supplies or shelter. And, if you're thinking, "Hey! A knife hand isn't really fair," there's even a precedent: The Walking Dead's Merle Dixon.

As the Lunar Chronicles series continues, Cinder becomes imbued with a revolutionary spirit and a loyalty that would help the whole group. In Cress, Emperor Kai even tells her in Cinder that she is less a princess and more a revolutionary. And when the zombies take over, a revolutionary is just what we'll need. As long as you have a more level-headed person in your group that can reel her in when her plans get too bananas.

If you're looking for levelheadedness, Malencia Vale is your woman. Cia is one of the very few people chosen to participate in her society's university, so she has the smarts to strategize survival plans. She proved during Joelle Charbonneau's The Testing and Independent Study that she is a slave to logic, and her quick problem solving has already saved her life and those of her peers several times. But Cia is also a fighter and incredibly brave, plus she has an intense knowledge of botany. Botany? Yes, you'll need Cia when you're hungry and scavenged supplies are low. She can can grow a garden for food and can easily sort through plant life to determine those safe for eating versus poisonous. Because the last thing you want in the zombie apocalypse is to be taken out by a poisonous weed.

Though born into the selfless Abnegation, she chose to become a Dauntless initiate, proving her bravery. In Divergent, Tris was the first to jump from the roof into the Dauntless headquarters, showcasing not only that bravery, but her initiative and born leadership skills. Because of her extensive Dauntless training, she excels at hand-to-hand combat, can conquer her fears, runs like the wind without getting tired and is trained in most every weapon known to man. Plus, in Allegiant , she showed that she's willing to sacrifice her own needs in a jam for others or the greater good — if you're feeling selfish. With Tris on the front lines, good luck, zombies.

Katnkss' little sister came along way from her ducktail clothes during the Reaping in Suzanne Collins' The Hunger Games.

By Catching Fire, Prim is all business. She taking charge when Gale is injured, pushing everybody else out of the way, saving his life by cleaning and stitching his wounds and tending to his fever. And in Mockingjay, she puts her life on the line to volunteer helping people injured during the revolution. She's a born medical professional who isn't afraid to do what it takes to save someone, and definitely isn't afraid of blood. And in the zombie apocalypse, there's bound to be blood.

Four is not only Dauntless-trained, he's a Dauntless teacher. He, with Tris, can help train the group in weaponry and how to conquer your fears. Speaking of fears, he has only four, hence the nickname. But with his father unlikely to survive the first advance of the zombies, we can whittle that down to three. OK, fine, he's mostly here for the eye candy, and when our group beats the zombies, re-population.