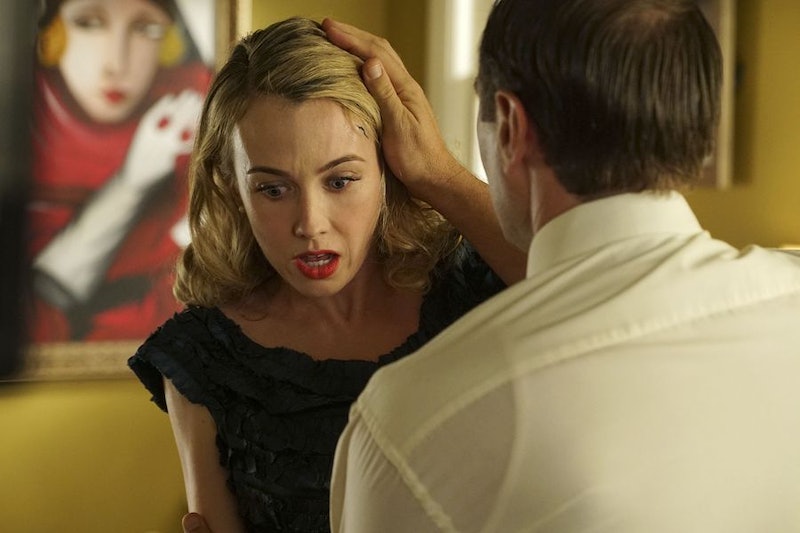 The two-hour Season 2 premiere of ABC's Agent Carter climaxed with the villainous Hollywood starlet-slash-evil scientist Whitney Frost seemingly evaporating in an explosion of so-called "Zero Matter" at Isodyne Labs, along with heroic Dr. Jason Wilkes. However, the final moments of the episode showed us that Whitney had, in fact, survived — and apparently absorbed the Zero Matter, to boot. But exactly how will the Zero Matter affect Whitney Frost going forward?

We got an answer to how the Zero Matter affected Wilkes pretty early in last week's episode, when we learned that he had been rendered invisible and intangible by the mysterious unstable substance. But the reveal of Whitney's fate would have to wait until the closing scene, when the actress unintentionally absorbed her handsy director: the black goo within her reached out, enveloped the man, and somehow drew him inside Whitney's body. What is that power, exactly, and what does it mean for Whitney? Just what is she turning into?

Fans of Marvel Comics already know that Whitney Frost is the alter ego of the villainess Madame Masque — frequently a nemesis of Iron Man, she was disfigured in a plane crash and subsequently donned a bulletproof golden mask to hide her scarred visage. Just like Carter's version of the character, Madame Masque was born without superpowers... but started gaining some when she set out on a quest to acquire magical artifacts. However, those powers usually involved teleportation or energy blasts… not absorbing another human being with the help of scary black goo.

So what gives? Well, it seems as though Carter is giving us a variation of the Madame Masque character rather than faithfully adapting the villain comic fans have been familiar with since the '60s. For one thing, she'll never don her titular disguise: "She never wears a gold mask," executive producer Michele Fazekas told Entertainment Weekly last month, "but you’ll see a nod to that." This Whitney Frost may not have been injured in a plane crash, but the Zero Matter left a scar of black goo across her forehead — a scar that only got larger after she absorbed her director. Indeed, she'll quickly have to find a way to cover that up, even if it's not with a golden mask.

Another difference between this Whitney and her ink counterpart is her origin story: while Carter's version acquired her powers from Zero Matter, the comics' version got hers from those aforementioned magical objects. We already know that "Zero Matter" is the show's term for what's called "darkforce" in the comics, a substance from a nearby universe that can grant abilities to humans to learn how to tap into that parallel plane and harness its energy.

Given this change in her origin, Carter's Whitney is manifesting powers much more similar to other harnessers of darkforce — like Blackout, who we've previously seen on Agents Of S.H.I.E.L.D. — than her own comics counterpart. Typically, characters who learn how to tap into the darkforce learn how to manipulate it, often turning it into solid objects to use as projectiles or defensive barriers. But a more specialized power that some possess is the ability to envelop a target in darkforce and then project that person into the Darkforce Dimension itself.

Given that this version of Whitney Frost seems to be an amalgam of various Marvel characters, it's hard to predict which direction she will take in the remaining seven episodes of the season — but it seems like the road to controlling her newfound powers will be a long one for the starlet. The press release for the sixth episode, "Life Of The Party," reveals that "Whitney makes a move to control the deadly Zero Matter," indicating that she doesn't have full authority over the mysterious substance yet.

Perhaps, like Cloak (another darkforce manipulator in the comcis), Whitney will eventually find herself consumed by a hunger that drives her to absorb the life forces of other humans in greater and greater quantities. Of course, Cloak's hunger could be assuaged by the abilities of his partner, Dagger — which could perhaps indicate that Carter's Whitney isn't so much "evil" as she is simply in need of a force for good to help balance her out.

Is there a way Whitney Frost can make it out of Season 2 alive? Or will the Zero Matter end up consuming her like it's consumed so many others? Whatever the outcome, it's great to see Marvel introducing such a memorable, complex female villain into its Cinematic Universe.