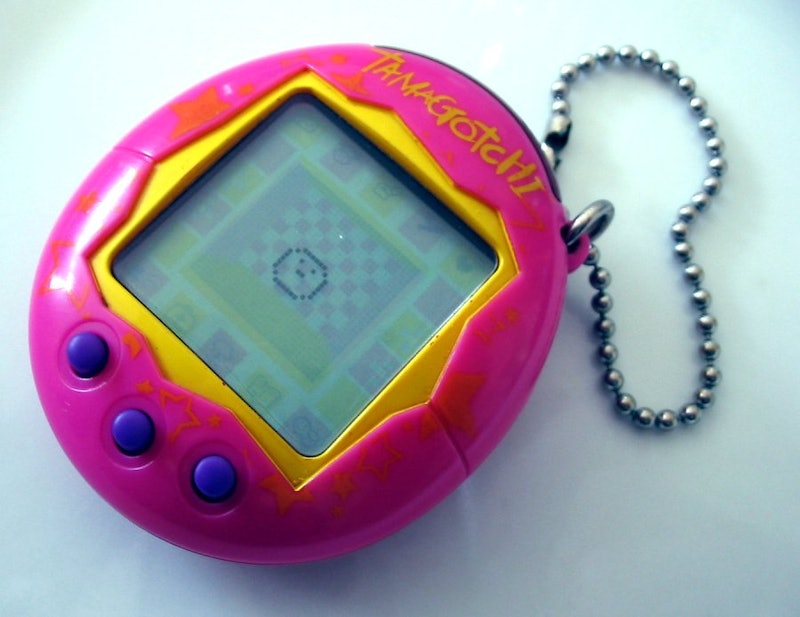 Once upon a time, owning a Tamagotchi was a rite of passage: For many ‘90s kids, it was the first time the care of some kind of creature fell solely to them, even if that creature was just a couple of pixels on an LCD screen. But although each Tamagotchi might have varied depending on how each child raised it, there remain some universal struggles all Tamagotchi owners understand. It’s one of the many parts of being a ‘90s kid that draws those of us who grew up during the decade together and binds us so tightly.

Sure, a lot of kids had actual living, breathing family pets growing up (I sure did); however, caring for a dog, a cat, or even a fish was typically a group effort, with most of the work being done by parents. After all, you can’t really rely on a very small child to walk the dog by themselves at 6 o’clock in the morning every day. A Tamagotchi, though? No adult in their right mind would subject themselves to the whims of a plastic egg, leaving these strange and mysterious creatures the sole province of the children of the house.

Tamagotchis could bring great joy, but they could also bring great frustration. These 15 struggles? We’ve all been there. And, as weird as it may seem, we probably wouldn’t have it any other way.

As I rediscovered when I briefly turned my phone into a Tamagotchi last year (clearly I am not an adult in my right mind), the first hour after your new pet hatches is madness. Seriously, you guys. I mean, I know that actual newborn humans are demanding (and rightly so), but when your newborn is a tiny digital toy, the whole process is sped up exponentially — which means that your Tamagotchi will start screaming at you approximately once every three to five minutes, and it will continue to do that right up until it morphs out of its hatchling phase. Moral of the story: Don’t hatch a Tamagotchi unless you can afford to give it your complete and undivided attention for at least the next 60 minutes.

2. Worrying That Your Pet Would Die While You Were At School

Because obviously your mom wouldn’t let you take it with you. Math trumps Tamagotchi.

3. Not Knowing What To Do When Your Tamagotchi Starts Screaming At You For No Apparent Reason

4. Feeling Bad When It Gets Angry At You For Disciplining It

Oh. That’s what it needed — a good old-fashioned scolding. But if discipline is a necessary thing, why do I feel so guilty right now? If this is what raising an actual child is like, I’m going to be a terrible parent.

5. Feeling Bad When It Gets Angry At You For Winning/Losing That Wacky Little Game It Plays

6. Feeling Bad When It Beeps At You And You Can’t Take Care Of It Right Then And There

I’m sorry, Tamagotchi, but I’m driving right now, and if I stop to sweep your poop away, I’ll likely crash and kill us both. Then where would we be?

Stop giving me that look.

Nothing can make you feel guilty in quite the same way a Tamagotchi can — which is absurd, because it’s a toy. And yet… here we are.

8. Having Your Tamagotchi Ruin That Special Moment With Your Crush

Tamagotchis are the worst wingpeople.

9. Waking Up To A Screen Full of Digital Poop

You’d think an adult Tamagotchi would be capable of flushing the toilet itself, but no. It’s always going to wait for you to do it for it. And it will scream at you if you don’t do it fast enough. Kids: So ungrateful.

10. Finally Having Time To Play With Your Pet, Only To Have It Fall Asleep On You

Dang it, Tamagotchi — you were yelling at me to play with you all day, and now that I finally have time to… you’re asleep. What gives?

11. Sneakily Adjusting The Clock So That Your Sleeping Tamagotchi Wakes Up…

There was a sneaky workaround to the whole inopportune timing problem that ran rampant with owning a Tamagotchi: You could adjust the clock to make it fit your schedule. This also meant that you could age it really, really quickly if you didn’t feel like waiting for it to evolve in real time.

12. …And Worrying That You’re Causing Permanent Damage To Your Pet By Doing So

The downside to it, though, was worrying that making your Tamagotchi time travel all the time might be considered neglectful treatment… and if you neglected your Tamagotchi, you had to deal with this:

13. Watching It Morph Into The Exact Kind Of Tamagotchi You Didn’t Want

The worst part? It transformed into that Tamagotchi because of how you raised it. It’s all your fault. You monster.

When I was a kid, I raised my Tamagotchi from Babytchi to adult several times — but nothing could have prepared me for that one time when I woke up and discovered that my Maskutchi had turned into the disembodied head of an adult male with legs sticking out from the bottom of his face. I later learned that he was a secret character, and that his name in the North American release was decided upon due to the fact that he looked kind of like Bill Clinton.

All of this is intensely bizarre to me. I still don’t understand it, and I doubt I ever will.

Regardless as to whether your pet died because you mistreated it or whether it died because it simply reached the end of its lifespan, the end result was still the same: You had to actually deal with that death. Obviously coping with the loss of a Tamagotchi isn’t nearly on the same level as coping with the loss of a living, breathing pet — but even though a Tamagotchi is just pixels on a screen, we still get weirdly attached to them. Sure, we can just go ahead and hit the reset button… but you always remember your first Tamagotchi.

And somehow, the other ones never quite manage to live up to the original.