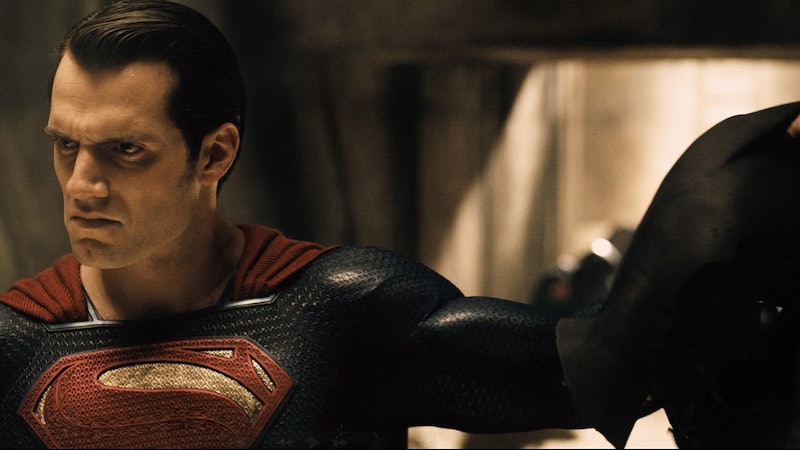 In the upcoming superhero film Batman v Superman: Dawn of Justice, DC Comics' two biggest icons (well, three actually, counting Wonder Woman), Batman and Superman, will share screen time in a movie for the first time ever. Not only that, but they're going to be fighting each other, in case you couldn't tell by the film's title. So fans are wondering, given the long comic book history of the two characters (both debuted in the 1930s) and all the adventures they've shared, if the two have ever fought in the comics. Well, yes, they have. But who won Batman v Superman in the comics?

The answer isn't as straightforward as you might think because the two heroes have actually squared off against one another multiple times. Especially in the first few decades, when DC's stable of characters wasn't as plentiful as it is today, they fought all the time. A lot of these old storylines were pretty bizarre, like one from 1965 where Batman uses a ray he invented on himself to advance his intellect 800,000 years... and gives him a giant head as a side effect. He then uses the same ray on Superman to de-evolve him to a caveman. Superman isn't very pleased with this development, and they fight.

But in the past 30 years, their meetings have been decidedly less fantastical, and it's these stories that are likely to have influenced Batman v Superman. So take a look at these nine notable fights between Batman and Superman, and then see if you can decide who's going to come out on top in the film.

This 1986 story by Frank Miller is probably the most influential to the film; at least visually. Batman being older and coming out of retirement, his robotic suit, and even some scenes in the movie, are all taken from this highly influential comic, which sees Batman, who has no superpowers, defeating the Man of Steel with his intellect (and super suit).

The two have fought no fewer than eight times since 2000, setting the stage for a nice rivalry heading into the movie. This 2001 story was a sequel to Miller's '86 tale, and again sees Batman on top, this time utilizing kryptonite gauntlets to pummel Superman.

The next year saw a brainwashed Superman go up against Batman, who fends him off with a kryptonite ring until Superman comes to his senses.

Another year, another fight. This 2003 story takes place in an alternate reality where Superman grew up in the U.S.S.R. instead of the good 'ol U.S. of A. Batman again uses his intellect, employing a device that mimic's Krypton's red sun (Superman derives his powers from Earth's yellow sun) to weaken the alien, then beats him up.

Another storyline that could leak into the film thanks to Luthor's involvement, this one from 2005 sees the supervillain convince Batman that Superman is bad news — something that seems very likely to occur in Batman v Superman. The LexCorp head also gives Batman some, you guessed it, kryptonite to aid in his fight. But this time it doesn't matter, as Superman easily makes short work of Batman in what might be their most realistic duel.

The New 52 served as a reboot of DC Comics in 2011, so this served as a new first meeting between the heroes. Batman is unprepared and shocked that his usual gadgets don't work on this guy in the cape, and Superman easily defeats him, and Green Lantern, because he's friggin' Superman.

The following year, Batman ended up being brainwashed, and given super strength to boot. He was sent after Superman, but again proved no match, and proceeded to get his butt kicked.

2013 brought another first meeting between the heroes, with the added twist of it taking place in an alternate universe. Here, a young version of Superman is sent to a parallel universe featuring an old version of Batman. Guess who wins? Young Superman, all day.

In 2014, The Joker got involved, so you know things got messy. The psychotic bad guy uses a gas that, again, brainwashes Superman to go against Batman. Batman has a special suit for the occasion, again, but this time Superman promptly tears it apart. But genius Batman is saved by a piece of kryptonite gum that he spits in Superman's face. For real.

So even though Superman easily wins in a straight up fight against Batman, the Caped Crusader can more than hold his own when he has time to prepare, thanks to his smarts. So now that you know some of the history... who ya got?