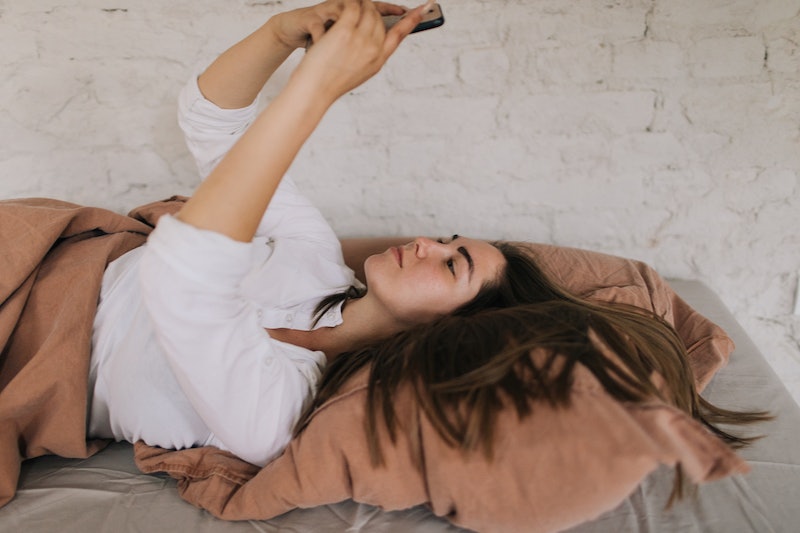 I just got onto OKCupid in late December (I know, I’m late to the game, no judgment) and I’m fascinated by it — because it’s basically an unending menu of Brooklyn cuties, but also from a nerdy research perspective, there’s just so much data out there because of it. Anyway, I was lying in bed recently, mousing through profiles, when I realized something interesting: I was “liking” way more non-male-presenting folks than I had been a couple weeks earlier. (Background: I identify as queer and am excited by all gender presentations but am currently finding myself mostly with cis males.) And I had a thought — there’s all this research about how women are more attracted to more masculine men when they’re ovulating (whatever “more masculine” means; let’s fight about it in another article), but I haven’t seen any parallel research about whether human desire changes across gender throughout the month.

So I did what any self-respecting nerd would do. I looked into my own data. I made graphs and charts. And I found some interesting things.

But first, some background so it all makes sense: The average menstrual cycle is 28 days long (mine has been exactly 30 for the past few months, so I guess I’m a bit of a laggard in that department). During this time period, your hormone levels are constantly dipping and rising in what are actually more like mini cycles. The hormones I’m talking about here are estrogen, progesterone, and testosterone. The levels of each of these in your body is what orchestrates the different phases of your menstrual cycle.

I mean, just look at this chart. (Note that things are different for you if you’re on hormonal birth control, since in that case you’re adding hormones to your system to level out these dips.)

Everyone’s libido is different, and there are a bunch of different factors that need to be taken into account, but what researchers do know is that testosterone has a lot to do with libido in folks with female reproductive systems. Specifically, when your testosterone levels are higher, you’re more likely to want to bang. On the other hand, progesterone is associated with lower libido.

What We Know About Attraction And Ovulation

There’s been a bunch of research looking into whether the sexiness humans with menstrual cycles feel when they’re ovulating actually changes behavior that can result in making babies. The short answer is yep, you act differently when you’re ovulating. For instance, your voice gets higher and you’re more likely to buy sexier clothing. I’ll leave it to the experts to decide whether that’s always been the case across all cultures and definitions of femininity (like what was “sexier” clothing in the Victorian era? Not like women even had their own money to buy anything then, since they were legally the property of their fathers or husbands). This apparently makes you more alluring, at least for the exotic dancers in this one study that found that dancers averaged two times more in tips an hour when they were ovulating than when they were on their periods.

And then we come to this famous study about who we actually like during which parts of our cycles. This study was actually a meta-study that looked at 50 already published studies on the subject, and it found that hetero women were more likely to like more "masculine men" when we’re fertile than during the rest of our cycles (strong jaw, deep voice, alpha male, etc).

But I still want to know — what does this research mean for the queers? Enter my very non-rigorous experiment, in which I looked back at my 35 days of OKCupid data and categorized the 119 people I’d “liked” across male, female, and genderqueer identities.

My experiment time span just so happened to have two ovulations in it. And during both of these times around ovulation when my testosterone levels were highest, I “liked” way more people. And I do mean waaaay more people — for instance, most days between ovulations and when I was on my period I never even checked the site, versus one fabulous day during ovulation where I “liked” 23 people. A veritable tour de force! I can only assume this means I was on the site for longer than usual, because I was on the prowl. (Thanks, testosterone.) This finding aligns with all that other research about how we feel sexier when we are fertile.

Around Ovulation, I Was Actually More Likely To “Like” Non-Male People

The next thing I discovered flies in the face of the whole find-hunk-while-ovulating-to-make-strong-babies body of research. While nearly every day I liked more male-identifying people (because that’s what I’m in the mood for most right now in my life, and because there are just way more cismales who like cisfemales on the site than other permutations), during those ovulation periods my likes were way more evenly-distributed across male, female, and genderqueer people than it was when I wasn’t ovulating. For instance, that grand day of 23 “likes” included six women, 13 men, and four genderqueer folks; the day before that I “liked” eight women, seven men, and six genderqueer folks. Contrast that with a day one week after I ovulated, where I “liked” one woman, nine men, and not a single genderqueer person.

Clearly, this is a shoddy study at best. It’s not like there are even enough new people on OKCupid every day for me to check out (and I live in the hottie Mecca that is NYC), and in addition to that, I’m a busy human, so sometimes I didn’t check it, even if I was interested. I also don’t check it when I’m with my primary partner, and we went on a trip together, so there’s a nine-day gap in data, which in and of itself is problematic from a research perspective. Finally, I actually am on hormonal birth control — I have an IUD, which puts low levels of hormones in my body at all times. So maybe this is all in my head.

All in all, it’s not a rigorous study. If I was actually going to do this experiment for real, I would have tested my hormone levels every day for a month, meticulously logged how I felt each day, somehow got enough new profiles so that I wasn’t just longing after the same people day after day, and of course had a bunch of other people do it with me. But it is pretty damned interesting nonetheless, and maybe it will help to spark a conversation about the relationship between hormones and queer desire.