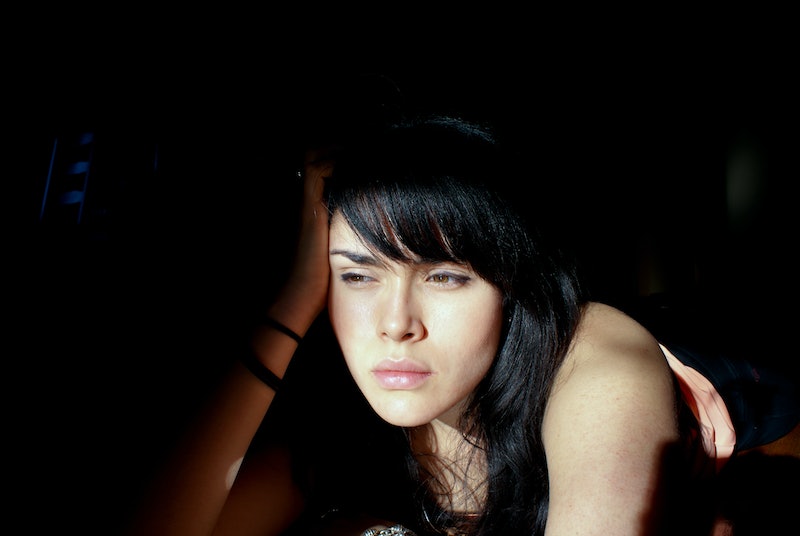 We at Bustle love giving you tips for how to tap into your sexual potential and troubleshoot when things aren’t going your way in the bedroom. But what about finding solutions to those stressful sexual health situations that inevitably crop up when you’re getting down? Emma Kaywin, a Brooklyn-based sexual health writer and activist, is here to calm your nerves and answer your questions. This week’s topic: how to know if you're fertile, and what you can do to protect your fertility.

Q: So I’m in my late twenties, and am totally not ready to have a kid yet. But I keep hearing about how fertility declines with age, and that’s freaking me out a bit because I probably wanna have kids later! How do I know if I’m fertile? Am I more likely to be fertile later because I got my period way late, when I was 16? How can I protect my fertility now so I can have babies later, when I’m ready?

A: For the first part of life with a sexually mature body, most people are doing whatever they can to not think about their fertility; indeed, to prevent it (through things like contraceptives). But as we get older, many start to think about when (and if) they want to make a next generation. Whether you want to know about fertility to make sure you have a baby or to make sure you don’t, it’s a good thing to understand — because it’s a bit complicated.

Note: I’ll be using “female” to talk about the reproductive organs that encompass the uterus, fallopian tubes, and ovaries, but not all humans with these organs identify as female, and not all female-identifying humans have these organs.

What Does Fertility Even Mean?

Fertility is something of a complex term, because it really means two things simultaneously. Humans with female reproductive organs are fertile only a few days each month, during a certain point in their menstrual cycles that centers around ovulation (the release of eggs into a place where sperm can meet up and canoodle).

However, when most people say “fertility,” they really mean someone’s ability to make a tiny human overall. In this second definition, fertility is binary — you are either fertile (can make a baby) or infertile (cannot make a baby). These ideas are related but different, so let’s unpack that!

When Am I Fertile?

All people born with female reproductive organs start out with a set amount of immature ovum (eggs) — around 2 million, waaaaaaaay more than any one human will ever need. Around 300,000 of these will still be around at puberty. This is the time when your body starts being fertile, aka you can feasibly have a baby. Once puberty hits, your body releases an egg in a process called ovulation.

Ovulation happens every month(-ish), and a normal menstrual cycle can be anywhere from 21 to 35 days long. Once your mature egg is released, it can live in your body for 24 hours before disintegrating — unless it meets a sperm. Sperm can live in the female reproductive tract for up to five days. So really, your monthly window of fertility is much longer than the one-day life of your egg.

How Does Age Impact Fertility?

Age tends to come up super fast in any conversation about fertility. Some age-related comments are just old wives’ tales, but others are actually grounded in good science. Let's take a look.

Most people with female reproductive systems get their first period (called menses) at anywhere from age nine to sixteen, with the average age in America at about 12. Despite how intuitive it may seem, when you start getting your period has no bearing on when you will stop getting it. That is to say, being an early or late bloomer doesn’t give you a hint to when you’ll go through menopause and stop being fertile.

Instead, the thing that most strongly drives when you will enter menopause is when your relatives went through it — so talk to the uterus-owners in your life and figure out what’s going on with them. Also good to know: researchers say that starting your period earlier or later than the average doesn’t affect your ability to make babies.

While the time when you get your period doesn't impact your ability to have kids, the time you try to get pregnant does. Fertility in humans with female reproductive organs is at its peak when we’re young and nubile, and declines over time, ending with menopause.

While your reproductive time frame can differ greatly depending on a number of factors, including the number of ovum you start with at birth, average fertility declines starting in the mid 30s. By age 40, research indicates that the average success of natural conception (aka making a baby by bumping uglies) is less than five percent each month, due completely to the aging of eggs.

What Else Can Impact My Fertility?

Endometriosis is a disorder in which the lining of your uterus decides to take itself out on an adventure and grows outside your uterus. Since it maintains its identity as endometrial tissue, it thickens and bleeds with your menstrual cycle — but the blood has no place to go, resulting in irritated tissue that develops into scar tissue or adhesions. This can mess with your fertility by obstructing the egg’s path; around one-third of women with endometriosis have trouble getting pregnant.

Pelvic inflammatory disease, or PID, is what doctors call it when your reproductive organs get infected. This usually occurs from sexually transmitted bacteria like chlamydia or gonorrhea, although it can also happen from bacteria getting into you in other ways, such as through the unclean insertion of an IUD.

If you have PID for a while, it can result in scar tissue or pockets of infected fluid that grow all up in your reproductive space, which not only can cause you pelvic pain but can mess with fertility or result in an ectopic pregnancy, a dangerous situation in which a fertilized egg implants in your fallopian tube instead of in your much larger and more prepared uterus.

How Can I Protect My Fertility?

Maintaining a healthy weight helps your cycle stay normal. If you don’t have enough fat on your body, your body can stop making estrogen and you can stop cycling altogether. If you are overweight, your extra fat cells could be making extra estrogen, which can cause you to not ovulate for months at a time. If you think you may be over or under weight, talk to your doctor about the optimal weight for you and healthy ways you can get there.

Do Your Best To Prevent Sexually Transmitted Infections

Some STIs can mess with your fertility. Chlamydia and gonorrhea are the big ones to check for here — if they go untreated, they can cause PID. Using condoms can protect you from getting these infections, and it's good practice to get tested at least annually (really every three months if you're playing with more than one person) so that if you do have one of these, you can get it treated ASAP.

Minimize Stress In Your Life

We all know that stress impacts our bodies. More research needs to be done on this one, but what is out there suggests that stress can impact fertility. Being a human is stressful, and we can't always minimize all the stressors in our lives, but we can certainly try! It’s up to you to figure out what works for you — whether it’s taking a long bath after work, going for a run, doing some art, or snuggling with your favorite sweetie.

Put Good Things In Your Body

This is another area where more research needs to be done, but researchers do know that putting healthy foods in your body and making sure you don’t have vitamin deficiencies is a good idea.

There’s significant research showing that smoking lowers your cache of eggs and can actually age your ovaries. Alcohol consumption is also something to watch out for, with some studies finding that people who drink heavily are more likely to experience ovulation disorders, and others finding that even drinking just a bit when you’re trying to make a baby can hinder that process.

Finally, some studies have discovered that caffeine messes with estrogen if you drink it in large quantities (defined in this case as anything more than 200 milligrams each day).

How Can I Tell If I’m Fertile?

If you’re curious or worried about your fertility, you can get tested. Talk to your doctor about what tests make sense, because there are a lot you can potentially do. Testing ranges from sharing lifestyle and cycle information with your doctor to getting a pelvic exam to testing hormonal levels.

More invasive testing can include a hysterosalpingogram (or HSG), which is where they inject dye up you and then x-ray your uterus and tubes to see if you have any blockage, hysteroscopy, which is where they put a wee camera up you to investigate abnormalities or scarring that might be messing with your fertility; or laparoscopy, where in addition to a camera they insert a tiny laser all up in there that can remove any blockages (like those that come from endometriosis).

However, if you’re in your 20s and aren’t actively trying (and failing) to get pregnant at this very moment, it probably doesn’t make sense to get tested right now. Testing is really for people who are running into trouble making a baby, or who are reaching that time in their lives when fertility is more touch and go.

If you want to get tested, go ahead — it’s your body after all! But, as a wise woman (aka a fertility specialist) recently told me, it’s important to think about what it will feel like to get your results back. Is it going to change the way you think about yourself?

Mainstream society tells us that a large part of what makes us adults is our role as parents. Struggling with infertility can therefore be extremely emotionally challenging, and can even undermine how we think about ourselves as humans.

The good news is that if you can’t have your own biological children in the natural way but really want to, there are many options for becoming a parent! Depending on what’s going on with you fertility-wise, you can freeze your eggs or find a surrogate to carry your baby to term, resulting in a baby that shares your DNA. There are also 13,000 kids in the U.S. foster system right now who desperately need adoptive parents. On the other side of things, many people are actually choosing not to have children, and they’re making this decision for many different reasons.

All of these are ways to create different family structures, and it’s up to you to choose the one that works best for you, given the constraints you’re working with. Infertility, if that’s part of your life, is just one of many elements that will go into how you end up making your family.