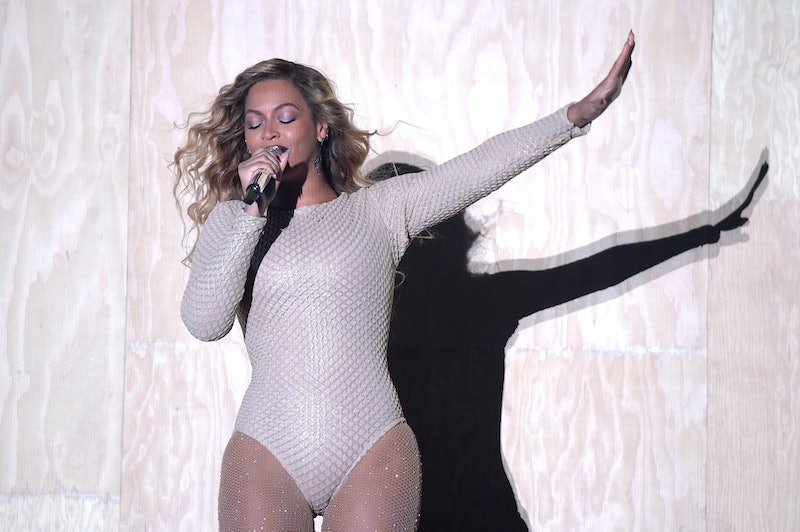 It has been three years since Beyoncé has released an album, and some fans might be discouraged by that fact. Not me. Instead, I'm excited by that fact. You know why? Because Beyoncé could go on tour in 2016; yes, this year of all years could be the year that the Beyhive has reason to take flight once more. Beyoncé is performing at the Super Bowl alongside Coldplay in February 2016, and she has already appeared prominently in the released music video for Coldplay's "Hymn For The Weekend" (which, even as a Beyoncé fan, I wish she'd sat out of or, at least, had a less offensive role in). However, the fact that she hasn't released a new album in three years is far from a discouraging fact when you consider Beyoncé has released an album once every two-three years ever since she went solo. Since 2015 didn't bring us a new album, 2016 has got to be that year. Update: Yes! She's going on the Formation Tour in 2016.

Earlier: Why else would Beyoncé kick off February 2016 with a guest appearance in a music video, then followed by a performance at an event as prominent and highly-viewed as the Super Bowl? Sure, she's Beyoncé, and thus she owes me no explanations for the things that she does, but I think that she's trying to tell her fans something here. Starting the new year off with a bang has got to be an indication of big things to come this year, right? And those persistent rumors that Beyoncé and Jay Z will release a joint album haven't materialized yet, which hasn't made me forget about them. Quite likely, Bey's Super Bowl performance with come with a healthy side of dropping a new album during the ceremony like Miley Cyrus did with Miley Cyrus & Her Dead Petz .

But, hey, maybe I'm wrong. Maybe Beyoncé won't release an album in time to go on tour in 2016, and instead her tour happens in 2017. That doesn't mean we won't have the chance to see her on the road. After all, she's appearing during the Super Bowl presumably because she was on a song with Coldplay for their album A Head Full of Dreams, and she might end up appearing at a Coldplay show somewhere along their 2016 tour. I wouldn't give up hope of being able to see Beyoncé at a concert venue near you in the coming year. The only thing that's iffy is whether or not she'll be performing new music, her own songs, or songs we've heard her guest sing on. Until we know for sure, you can catch her at the Super Bowl on February 7.