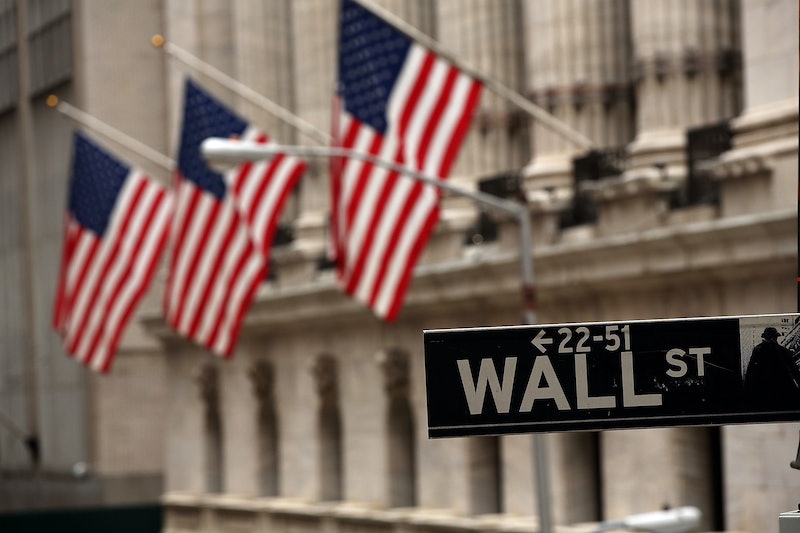 When something's reputation either fizzles or completely goes south, it makes sense to rebrand. It's a strategy that clothing lines, restaurants, and Snoop Lion (Dogg?) have all utilized. And yes, banks deployed this tactic following the 2008 financial crisis, renaming the high-risk investment packages that contributed to the collapse of the American economy. At the end of the Oscar-nominated film The Big Short, viewers were warned that little has changed, and these new (but essentially the same) investments would lead to a similar financial catastrophe. But should The Big Short's warning of another financial crisis be taken seriously? Bustle talked to a couple of financial experts to find out.

For those who haven't seen it, the film aims to explain the complicated financial crisis of 2007-2008 from the point of view of four groups of finance guys who predicted and then correctly bet on the collapse of the credit and housing markets. At the heart of the problem were collateralized debt obligations (CDOs), packages of mortgage loans that were legally put together by banks and sold to investors, who jumped at the chance for high returns. As demand for CDOs grew, banks began issuing bad (aka subprime) mortgage loans, which are extremely risky because there's a greater chance that borrowers won't be able to pay them off. Riskier homeowners inevitably couldn't pay their mortgages and defaulted on their houses, leading to way more supply than demand in the housing market and causing it to crash.

As you might expect, people weren't clamoring to buy CDOs after they lost trillions of dollars less than a decade ago, so banks changed them slightly and then stuck a new name on the packages: "bespoke tranche opportunities" (BTOs). Whereas CDOs broke a pool of mortgages into categories based on their riskiness and sold different layers to different investors, BTOs are made up of loans chosen to meet specific investors' needs. Similarly to a bespoke suit, BTOs are one-of-a-kind, customized for the client. But despite this difference, BTOs still rely on banks and investors to take dangerous risks for higher returns.

"You can try to address some of the problems that led to blowups in CDOs before, but I think some of the underlying economics persist," Craig Pirrong, professor of finance at the University of Houston's Bauer College of Business, tells Bustle. "There are still incentives for the banks and investors creating and buying these packages (namely, making a lot of money), while the entities issuing loans to prospective homeowners don't have much reason to adequately evaluate the risks. Since those issuing loans plan to sell them off, they rid themselves of any financial consequences should homeowners default and the cash flow dry up."

The financial crisis of 2008 really spiraled when the housing market collapsed, and BTOs are vulnerable to similar situations, should they arise. "The way these things are structured and designed means they're more susceptible to economy-wide risks," Pirrong tells Bustle.

What's keeping BTOs from causing the same major problems as CDOs, then? "There is a different regulatory environment that potentially will restrain the growth of these products," Pirrong says. The main addition is the Dodd-Frank Wall Street Reform and Consumer Protection Act (Dodd-Frank for short). Simply put, the legislation passed in 2010 created oversight councils that regulate the riskiest transactions, look for elements that could affect the whole financial market, protect consumers, and forbid banks from owning, investing, or sponsoring hedge funds, private equity funds, or any proprietary trading operations for their own profit.

Susan Wachter, professor of real estate and finance at the Wharton School of the University of Pennsylvania, tells Bustle that Dodd-Frank can't definitively prevent another catastrophe, but it will certainly make a repeat of history less likely.

On top of the new legal protections, BTOs are not nearly as common as CDOs were in the years leading up to 2008 (at least, not yet), which makes it even less probable that the investments will all go south. Of course, there are still risky transactions happening, as the finance industry often thrives on betting money in order to make a lot more, but they aren't affecting the market in the same way. "Yes, there are deals that raise eyebrows, but its not going to bring the market down," Wachter says.

It's always possible for widespread risky financial behavior to severely cripple the economy and cause a disaster similar to the last one. "If — through another mechanism — you would have widespread poorly underwritten lending, then sure, it could happen again," Wachter tells Bustle. However, BTOs probably won't do that in their current state.

Pirrong warns that just because BTOs aren't a problem now doesn't mean they never will be. The Big Short's prediction was based on very real circumstances, but was a bit preemptive. "This is something to keep our eyes on, but it's not necessarily a looming threat," Pirrong says. "It's worth watching."