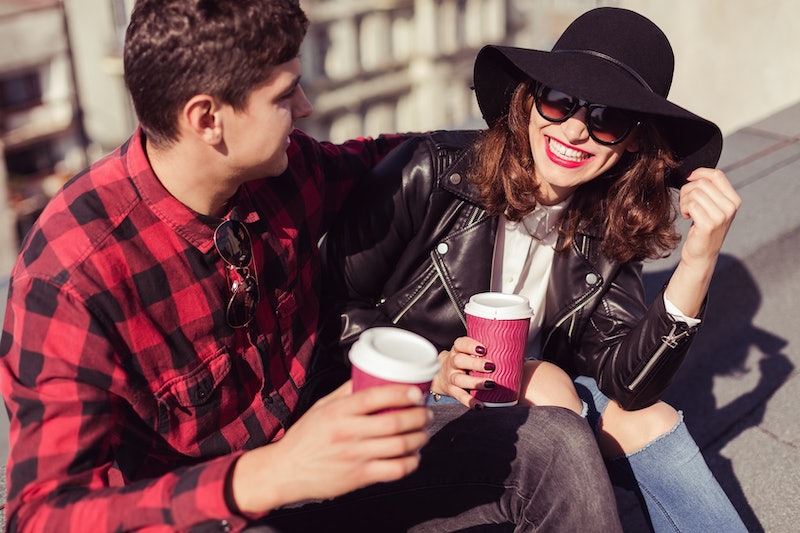 I'm sure by now you've heard that first impressions in dating can make or break everything. The good news is, that's not exactly true. Although the first date can seem uncannily similar to going on a job interview — you still may feel like you need to wear the "right" clothes, discuss your interests, and gauge whether or not this person is a right fit for you — dates can be a touch more forgiving than the grueling corporate world. Phew.

In fact, Match's recent Singles in America Survey has found that giving second chances are pretty standard in the dating world. After polling over 5,500 singles across the country, researchers found that most singles don't expect their dates to make a serious impression on them until date number two. So if you accidentally talk about your ex, spill coffee all over your shirt, or take them to a steakhouse when they're actually a vegan on the first date, fear not! Your odds of making a better impression on date number two are still pretty good. That should take some pressure off. Here are some of the survey's most interesting findings about how chemistry and impressions actually affect your dating life.

If you're expecting sparks to fly on date number one, you're in the slight minority. In fact, Match's survey found that 59 percent of both men and women don't expect to feel any chemistry until their second date. So if your date seems like a nice person, but you're not completely sure they're a fit for you, try going for date number two. When first date jitters are no longer an issue, they may surprise you.

2. Things Don't Get Sexy Off The Bat Either

If chemistry most likely won't happen on date number one, you should probably expect that lust won't either. After reviewing responses from its singles, Match discovered that over a third of men and women don't expect to feel any sort of sexiness until the third date, or later. Yes, your hunk of a coworker may already be giving you the vapors, but if you're meeting someone online, or getting set up with a stranger, it's pretty likely that the bedroom stare won't be making a debut on date number one. But don't worry, the passion is still to come. Pun fully intended.

Maybe we should start worrying about second impressions more than first impressions because it turns out they matter more in the dating world. Researchers found that 53 percent of men and women are willing to go on a second date with someone, even if they felt no romantic chemistry with them on date number one. When asked why, 50 percent of singles said that they felt a person may "grow" on them if they were given another opportunity to get to know them. That's right, gone are the days when "love at first sight" seemed to be a thing, and contrary to popular belief, the instant gratification of "swipe culture" hasn't seemed to effect whether or not we're taking our dates seriously. Like I said before, there's no harm in going for date number two if you feel the person has any hint of potential. Why not, right?

4. Men Are All For Seeing How Things Play Out

This may surprise no one (especially any single, heterosexual woman who has been on a dating site) but men are fully prepared to go out with someone, even if they feel no chemistry. In fact, the survey found that men are 80 percent more likely than women to go on a date with someone they don't feel a connection yet with just to see where things go. Finally, we have a solid explanation as to why guys will ask you out on the first message. Overzealous? Yes, but it may also be extremely effective.