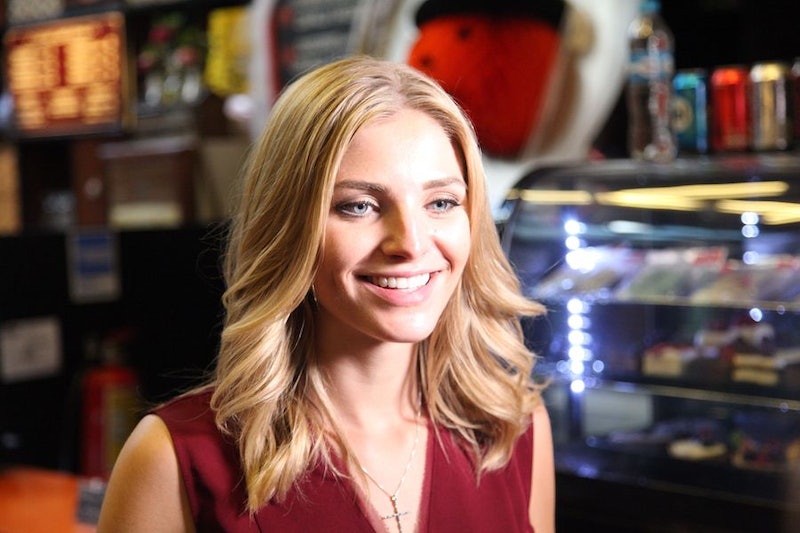 Oh, Olivia. Not only were viewers of The Bachelor quick to peg Olivia as the villain of the season (myself included), but now the women on the show have also turned against her. I'm not going to defend Olivia, because I truly don't think she's there for The Right Reasons, but I also don't want to find myself rooting for her because the other women on the show have started to pick on her. Unfortunately, that has become the case in recent episodes where the other women criticize Olivia for certain characteristics that not only may not be true, but also belong on an elementary school playground.

Only a couple of weeks into the season, it was apparent that Olivia's approach to The Bachelor was to win. The edit she is getting makes it seem like she only talks about Ben as if he were a prize at the county fair (I wish) that she wants to put on her mantel. Phrases like "He's mine," "I'm going to win," and "I'll be Mrs. Higgins," don't sound like someone who is in love but more like someone who is In It To Win It. That's why Olivia should be criticized for being on The Bachelor.

Reasons Olivia shouldn't be criticized for being on The Bachelor include: "dragon breath," cankles, or fake boobs. Unfortunately, all three of these things have been brought up by some of the other contestants while turning green with envy that Ben seems to like Olivia (I'm looking at you Emily). On this week's episode of Will You Accept This Podcast?, Entertainment Editor Kelsea Stahler and I discuss how the other women's behavior towards Olivia is almost making us root for the news anchor. Don't make me root for Olivia, you guys!

When the women went to Mexico City (the land of fashion, according the show), Olivia's bad breath became the thirteenth contestant on the show. While Olivia went grocery shopping with Ben, Emily (the twin minus the twin) began making comments about how Ben steered Olivia to the fresh mint stand because she has bad breath. Flashback to a few weeks ago when Emily initially brought up Olivia's breath and it's potential malodorousness.

Olivia herself brought up her "bad toes" and cankles, which thankfully ABC has respected by not making it a *thing* by showing on camera. While we shouldn't judge Olivia for maybe having "bad toes," we can disagree with her for making her toes the center of attention with Ben after he announced close friends had passed away.

Then there was the Teen Mom comment. This comment came out of nowhere when Olivia was "trying to relate" to Amanda's story about her ex-husband picking up their children from her mom's house while she was away filming. Olivia clearly realized her mistake in saying that Amanda's story reminds her of an episode of Teen Mom. She became emotional during her apology — TBD on the authenticity of the tears — but at least she apologized after realizing the comment was inappropriate to begin with.

I don't want to support Olivia. But the other women on the show need to realize that she can dig her own metaphorical Bachelor grave. The viewers aren't going to not like Olivia because she might have bad breath, so stay out of the pettiness, ladies. Ben is astute enough to realize Olivia's character should be questioned... not her dental health (where's Mandi when you need her?).