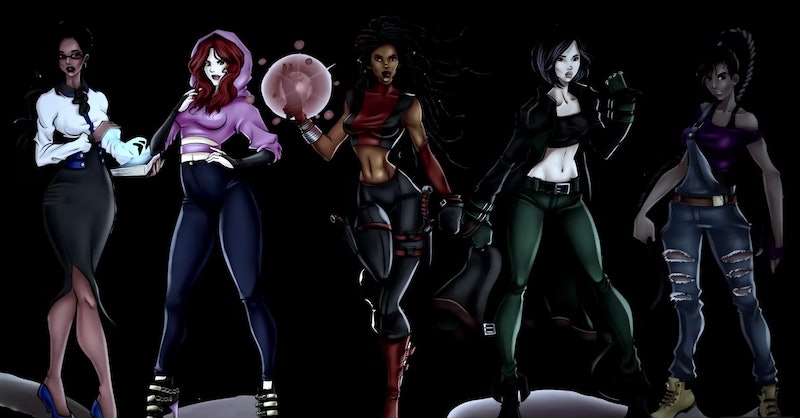 Being a female comic book fan can feel isolating — a lot of the time, it’s such a man’s world — so the news of Aza Entertainment’s comic book with female superheroes is very exciting. Created by Jazmin Truesdale, The Keepers: Origins features five diverse female superheroes from different parts of the world — finally giving women and POCs heroes that actually reflect them. And the bad guys are updated, too: not only do the heroes fight supervillains, they also fight "invisible evils" like racism, sexism, and homophobia. Women of color fighting the kyriarchy? Now that's a comic book I can get on board with.

Despite female readers proving this stereotype wrong so many times, graphic novel fans are all still assumed to be Seth Cohen-type men — and women are often challenged to "prove" their comic book credibility. The inspiration for The Keepers: Origins came after Aza Entertainment spoke to 75 women, and actually listened to what they liked and didn't like about comic books. What they discovered is that "women like three-dimensional characters" and "plot, emotion [and] suspense." This led Jazmin Truesdale to create a novel/comic book cross, with illustrated action scenes and more fleshed-out plot development.

This book is just the first installment in a series that will continue to smash stereotypes, and finally dent a hole in the existing whitewashed comic book industry, which pretty much only ever showcases wealthy white men. The women who do make it to the page all uphold traditional standards of white beauty and are basically inseparable from their sexuality. It's not a great horizon. But with books like The Keepers: Origins here to shake everything up, that might all be about to change.

More like this
The 20 Best Audiobooks To Fall Asleep To
By Aoife Hanna and K.W. Colyard
'Bridgerton' Star Nicola Coughlan Confirms Season 3 Will Focus On Colin & Penelope
By Grace Wehniainen and Alyssa Lapid
Candice Carty-Williams’ 'People Person' Tackles Daddy Issues With Warmth
By Sam Rogers
Everything To Know About Marvel’s 'Thor: Love And Thunder'
By Grace Wehniainen
Get Even More From Bustle — Sign Up For The Newsletter