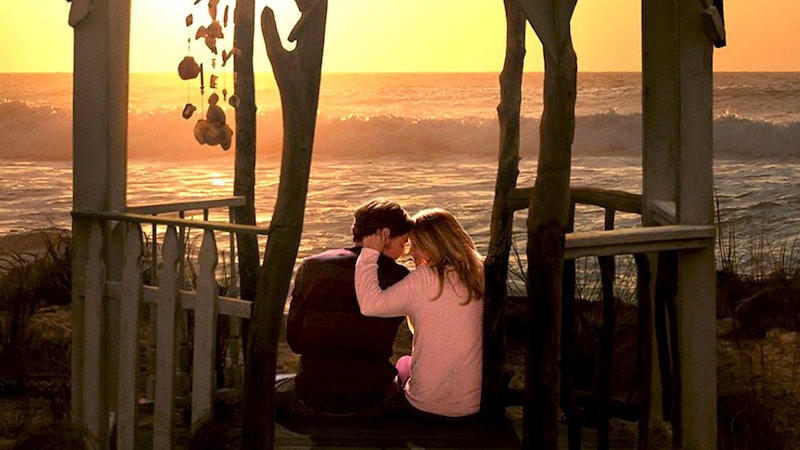 When you're watching a Nicholas Sparks movie, you pretty much know what to expect: an emotional roller coaster with lots of tears, tissues, and perhaps a little resentment at your significant other for not quite measuring up to the perfect protagonist on the screen. The newest Sparks adaptation, The Choice, will undoubtedly take you on this journey once more. But if you're not wearing waterproof mascara, you might be wondering just how heartwrenching this movie is. Just how sad is The Choice in comparison to the other Sparks movies of the past 10+ years?

Of course, the answer is in some ways totally subjective, since sad movies tend to affect people differently based on how much one can relate to the story and characters. Furthermore, your reaction to a sad movie can be entirely dependent on how you're feeling that day, and on your life situation in general. For example, I legitimately sobbed when I first saw Dear John after a breakup. Yet I watched Nights in Rodanthe a few months ago, dry-eyed and eating popcorn. Like I said, it's subjective. But to give you a rough idea of how many boxes of tissues you should bring with you to the theater, here's how The Choice measures up to some of Nicholas Sparks' other adaptations.

Plot: Angsty piano prodigy Ronnie (Miley Cyrus) goes to spend the summer with her deadbeat dad and has a cliché-ridden love affair with Liam Hemsworth.

Verdict: The Choice wins on the sadness scale. It's just too hard to take any aspect of The Last Song seriously.

A Walk To Remember

Plot: Shane West plays a rebellious teenager who, through unlikely circumstances, ends up in a school play starring opposite a bookish minister's daughter. He falls in love with aforementioned minister's daugther despite being warned not to. Tragedy ensues.

Verdict: This movie is way sadder than The Choice seems to be. You will cry, you will briefly pause to wonder what Mandy Moore is up to these days, and then you will resume crying.

Plot: A mysterious blonde (Julianne Hough) arrives in a small town and falls in love with a guy there (played by Josh Duhamel). But she has a secret past which comes back to haunt her, and it may jeopardize her new relationship and her life.

Verdict: The Choice is definitely more of a tear-jerker, even though Safe Haven has the benefit of Josh Duhamel's beautiful face.

Plot: Boy and girl meet in a small Southern town and have a whirlwind romance despite the fact that girl is already seriously involved with someone else. Years later, boy proves his love for girl by visiting her in a medical treatment center. Wait, this sounds really familiar...

Verdict: Despite having virtually the same plot as The Choice, The Notebook is sadder. For the sake of not spoiling the new movie, I'll let you see for yourself why it's not quite as depressing as the Gosling-McAdams film.

Hopefully you now have a better idea of how much crying to expect by the time The Choice's credits are rolling. It probably won't ruin your week, but if you're having a tough day then you might want to opt for a movie that's a little lighter. Or at least buy yourself flowers afterward. But if you're in the mood for waterworks, then sit back and enjoy.