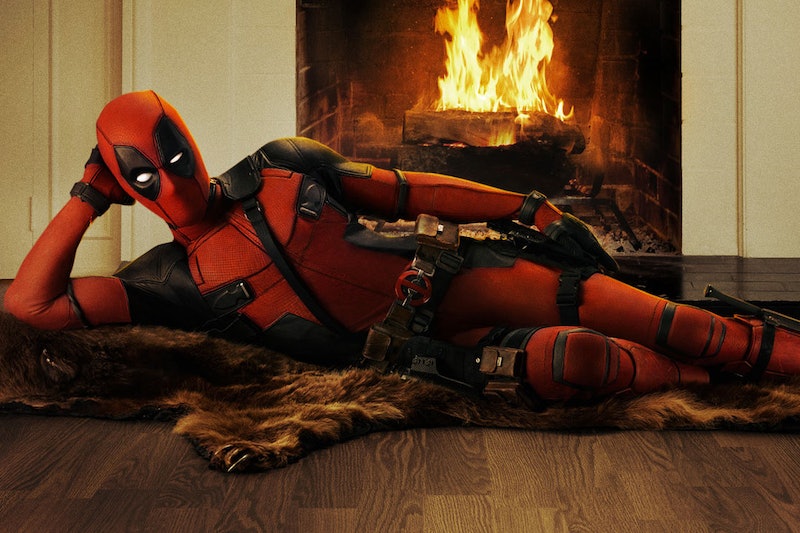 Deadpool is almost here, and it could be the movie that changes superhero films forever. I realize that probably sounds like hyperbole, but I really think this could be the case. Although it isn't the first R-rated superhero comedy thanks to films like The Toxic Avenger and Kick-Ass, it's the first to be based on a very well-known and established comic book character — and a Marvel character at that. Up until now, all of the blockbuster superhero films have almost exclusively been PG-13 affairs with some light comedic elements, but if Deadpool is deemed a success, then fans could expect to see a lot more experimentation in the genre moving forward. And there's one place where fans are really showing their excitement about this: The internet, by coming up with many great Deadpool memes and gifs to celebrate the upcoming film.

Online fans have taken the idea of a Deadpool movie and run with it, and many are psyched that the movie carries an R-rating and looks like it's going to be unapologetically violent, gory, and vulgar. They're also pleased that the film looks like it will actually be funny, rather than containing the pathetic attempt at humor that is so often wedged into superhero movies. But probably more than anything else, fans are excited that the movie looks like it's going to honor the character with a very faithful adaptation. So to show just how pumped the net is, here are the 11 best Deadpool memes and gifs to come out so far.

There was some legitimate worry among fans that Fox would cave and make the film PG-13 with the hopes of drawing a larger audience, but the true Deadpool won out in the end.

You know what else was bad? The last time Reynolds played Deadpool in X-Men Origins: Wolverine. But he deserves a second chance, and is absolutely getting it right this time.

Lest you think Deadpool is all fun and games, it also promises lots of great action.

That look. Gets me every time.

Oh yeah, there's going to be X-Men in this movie. And Deadpool is going to make fun of them.

Not technically a meme, but I'm really hoping somebody sees this ad and goes into the movie thinking it's a rom-com.

Deadpool has a millennial X-Man sidekick in the film in Negasonic Teenage Warhead, and although their interactions could easily fall into the trap of being an out of touch way to reach younger viewers, it looks like the character will be used appropriately.

Deadpool is known for breaking the fourth wall in the comics, and he's going to do it in the movie.

Mixing humor and gore is extremely difficult to do effectively. This works.

This pretty much sums up Deadpool. Obscenity? Check. Pop culture reference? Check. Classic trait from the comics? Check. Deadpool's got it all.

In case you couldn't tell by the internet's excitement, Deadpool is going to be good. Here's hoping that the film starts a superhero movie revolution.