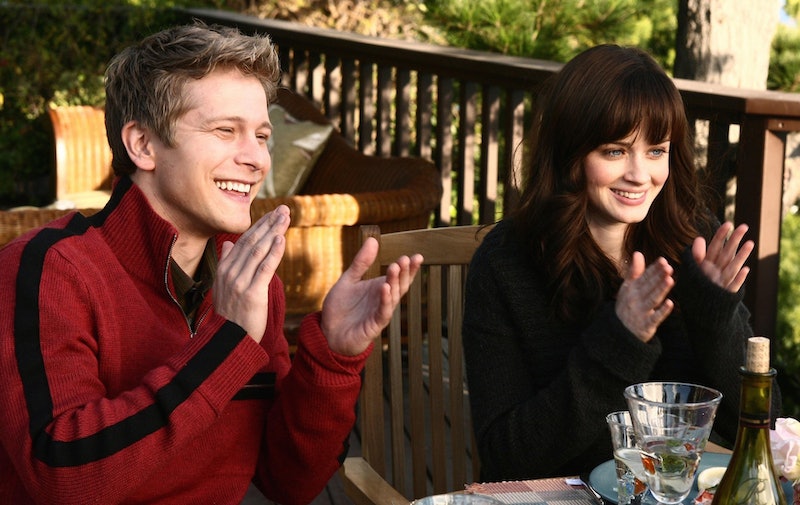 So if you're a person with a heart, soul, and unquenchable thirst for coffee, you probably know about Netflix's upcoming four-part Gilmore Girls mini-series. At long last we get to reunite with our favorite Stars Hollow residents. And now, it looks like a Yale alumni is going to make an appearance: Matt Czuchry, aka Logan Huntzberger, joined the Gilmore Girls revival. If you happen to be Team Logan this might seem like a great new development, but let's pump the breaks for a second and consider what Logan's return to Gilmore Girls could mean for Rory.

And before we dive into romantic waters, let's look at the facts. According to Amy Sherman-Palladino in an interview with TVLine, Rory isn't necessarily attached to anyone. Legally, that is. "She’s…. single in the sense that she’s not married. But she’s dating like any young woman with that face would be," Sherman-Palladino told the site. This could mean a myriad of things. Perhaps she's taken up with any of her old loves, be it Logan... or Jess... or Dean. Or gee, perhaps she's taken up with a new guy because she's a woman tap-dancing on her 30s and maybe it's high time she ditches her old boyfriends (and I say this from a place of love). So to begin with, it is possible Rory reconciled with Logan, but she certainly didn't reconsider his proposal from the end of the series.

Now, apparently one of Logan's BFFs Finn is returning for a quick cameo. Intriguing, right? Like, on the list of characters who need to come back, I wouldn't have even considered him for the top 30 (although granted, it's a huge cast of crazies). So this could potentially mean that Yale is having some kind of alumni event or reunion, which seems like a pretty innocuous, easy way to bring Logan and Rory together.

If we want to get momentarily dark, let's consider the massive loss of Edward Herrmann. The empty hole of Richard Gilmore is definitely going to be addressed within the contexts of the mini-series. "You couldn’t just say, ‘Oh, Richard died peacefully in his sleep, and now we’re going to go to the cherry-picking festival,’" Sherman-Palladino said. So perhaps there'll be a (gut-wrenching, totally, utterly gut-wrenching) story line that focuses on Richard's funeral. This is a cheap way for all of Rory's suitors to simultaneously rendezvous and try to be there for her, only to come to blows and fight for her heart.

I guess if we wanted to combine the two you could say maybe Emily is dedicating a library to Yale in Richard's name and that's where Rory runs into Logan. Who even knows. What is certain is that if Rory is not currently dating Logan still (and it seems peculiar that she would be still dating him after almost 10 years and the aborted engagement and break-up) it's going to be a weird meeting. Will he be a financially and professional success, finally unlocking his true potential and overcoming his previous business failures? Or did Rory's rejection send him back on the path of his hard-partying ways?

One thing's for sure: whenever Logan's around, Rory's life is certainly not boring. So I'm stoked for the return of Czuchry, and some yacht-stealing fun.