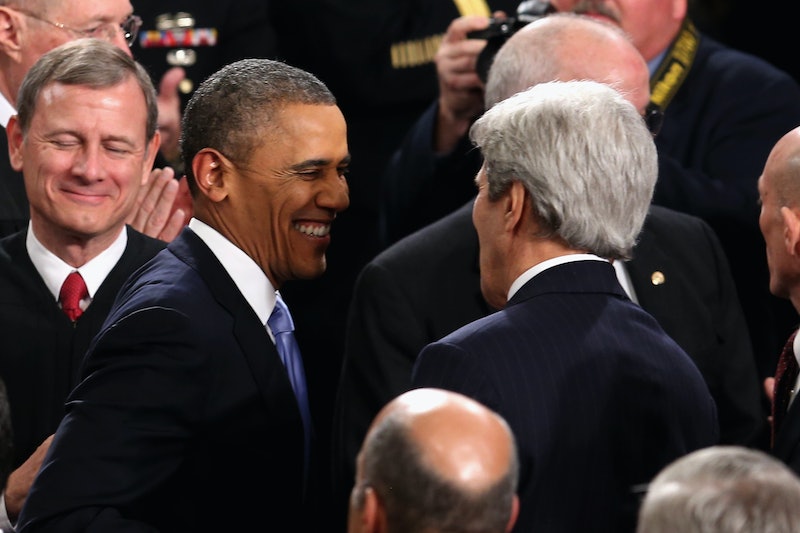 As usual, this year’s State of the Union address was a mix of policy, politics, and bored members of Congress. But sandwiched in between President Obama’s announcements on minimum wage, climate change, foreign policy, and the inability of Congress to do anything productive, there were a number of awkward, amusing and, in the case of Congressman Michael Grimm, downright threatening moments. If you couldn’t find it in yourself to sit through the entire hour-long affair, don’t worry — we’ve collected the choicest oddball moments here.

Vice President Joe Biden can often be relied on to provide unintentional and misplaced comedy, and he certainly didn’t disappoint on Tuesday night.

Why was he suddenly so delighted? Who was he pointing at? We’ll probably never find out, but who cares? Look at that smile!

John Boehner, by comparison, spent much of the night looking about as happy as Eeyore, but even he perked up when Obama, during a segment on upward economic mobility, gave a wholly unexpected shout-out to the Speaker’s father.

The president’s prepared remarks called on him to refer to Boehner as “the son of a barkeeper,” but Obama said “son of a barkeep” instead. For some reason, that’s got a much more folksy sound to it, which Boehner probably loved.

Unfortunately, Boehner’s glee didn’t last long: After the speech, he quickly posted a Vine criticizing the president on unemployment. Like other John Boehner Vines, this one works just as well muted as it does with the sound on.

On a more awkward note, there was the farcical presence of Duck Dynasty's Willie Robertson, who Louisiana Representative Vance McAllister invited as his guest. Robertson took the opportunity to pose for selfies with House staffers.

At one point in the speech, this happened:

Okay, it didn’t. That’s a Photoshop. But speaking of Photoshop, ThinkProgress’s graphics team really jumped into action after Obama made a reference to Mad Men in the context of women in the workplace.

That reference prompted Matt Weiner, the show’s creator, to issue a statement.

The speech ended on a somewhat dark note, when embattled New York Representative Michael Grimm was confronted by a local reporter about an unrelated campaign finance scandal. Grimm responded by storming off, storming back, and telling the reporter that “You’re not man enough. I will break you in half.”

Politico subsequently wrote an article about the incident with the blandest headline imaginable, while Grimm subsequently didn’t apologize.

As for the official Republican response to the speech, delivered by Representative Cathy McMorris-Rodgers, it more or less boiled down to this: