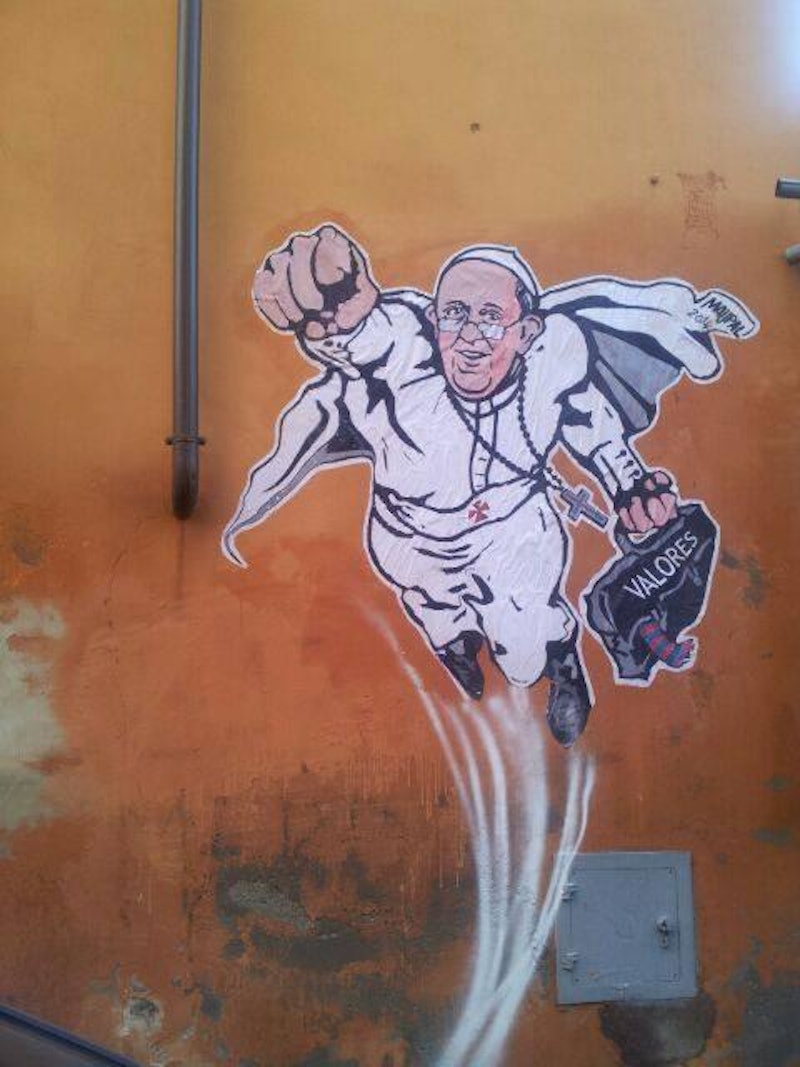 He's cracking down on capitalism, using the Internet as his ally, and winning the hearts of people across the globe one mass at a time: meet the SuperPope. The Vatican gave their seal of approval to graffiti depicting Pope Francis as a super hero, flying with a billowing white cape as he clutches a bag full of "values." The Holy See tweeted the picture saying, "We share with you a graffiti found in a Roman street near the #Vatican."

The artwork mysteriously appeared on a wall off Borgo Pio, a cobble-stoned street near St. Peter's Square on Tuesday, the same day the Pope graced the cover of Rolling Stone. There's no alter-ego necessary here — in the spray-painted piece, the leader of the Catholic Church is seen in a Superman-like stance, donning his glasses with fist out as he flies with his rosary in the breeze. The graffiti was signed "Maupal."

The Pontifical Council for Social Communications shared the photo with its 84,448 followers, who retweeted the SuperPope more than 1,000 times. The Vatican knows the people love them some "Papa Francesco." It's no surprise the graffiti was posted on Twitter since Pope Francis is big on the social network, putting out tweets at least once a day. @Pontifex has more than three million followers.

According to some, Pope Francis is not too far from having superhero-like qualities: he's all for helping the poor and oppressed, plus he's been more progressive than his predecessors when it comes to hot-button issues in the Catholic Church. As Bustle reported:

“I prefer a church which is bruised, hurting, and dirty because it has been out on the streets, rather than a church which is unhealthy from being confined and from clinging to its own security,” Pope Francis wrote. “I do not want a church concerned with being at the center and then ends up by being caught up in a web of obsessions and procedures.

So, yeah — while the previous pope(s) were embroiled in scandals, this one schooled Vladimir Putin on Syria, repeatedly reached out to the disabled and disfigured, and decided to poll Catholics on controversial issues that have distracted the church.

If winning Time's Person of the Year wasn't enough to convince you he's the most popular Catholic leader, check out the artwork for yourself. It's only a matter of time 'til the Popemobile gets a makeover.

More like this
6 Anti-Police Brutality Organizations You Can Support Right Now
By Syeda Khaula Saad and JR Thorpe
Watch Jacinda Arden’s Devastatingly Honest Resignation Speech
By Sam Ramsden
5 Striking Parallels Between Princess Diana & Prince Harry’s TV Interviews
By Catharina Cheung
Kim Kardashian Gives “Bucket List Dream” Lecture At Harvard
By Alyssa Lapid
Get Even More From Bustle — Sign Up For The Newsletter
From hair trends to relationship advice, our daily newsletter has everything you need to sound like a person who’s on TikTok, even if you aren’t.