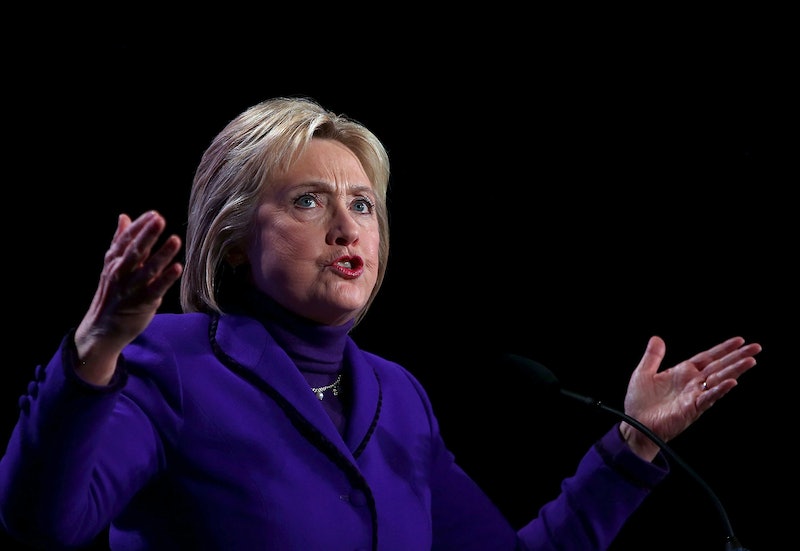 With the 2016 election in full swing and Hillary Clinton vying for the Democratic candidacy, our society's obsession with the way women speak was bound to come out at some point. Now, people are accusing Hillary Clinton of shouting, despite the fact that Bernie Sanders shouts all the time. This is how sexism works, y'all: A woman has been criticized for doing something that a man consistently gets away with and often just comes off as more passionate for.

"With a decidedly grating pitch and punishing tone of voice, Clinton lacks the elegance and grace of a Jane Fairfax — or a Nikki Haley or Michelle Obama. In contrast, Bernie Sanders is almost universally endearing," Colleen A. Sheehan concludes in The Inquirer. This commentary contrasts Clinton with other women based on "feminine" traits like elegance and grace and then gives Sanders a free pass without examining his mode of speech at all. Many pundits have offered similar critiques, which Amy Chozick lays out in The New York Times.

So, here are some words we really need to stop using to criticize the way women talk. Heck, I wouldn't mind banishing them from the English language altogether if that will prompt us to finally leave women alone.

Google defines "shrill" as "(of a voice or sound) high-pitched and piercing," and it has become a go-to insult for women's voices that is rarely ever used against men. Clinton is on a long list of women who have been called shrill — as well as a long list of women who have been insulted by Donald Trump. Or, more precisely, he described Clinton as "very shrill — do you know the word ‘shrill’? She can be kind of sha-riiiiill.” Nobody has commented on how shrill his voice must have sounded as he drew out that last word.

As Emma Watson pointed out in a U.N. speech, and as Sheryl Sandberg has brought attention to through her "Ban Bossy" campaign, the word "bossy" is often used to undercut women's power by insulting them for being leaders. Many girls start receiving this criticism at a young age, which can discourage them from taking on leadership roles as they get older. And even when women are in positions of power, they're still criticized for exerting their influence over people. Margaret Thatcher faced so many accusations of being "bossy" that her press secretary created a five-page memo on how to soften her image.

Like "bossy," "aggressive" is a word often used to criticize women for traits that supposedly make men good leaders. According to the Elephant in the Valley survey, 84 percent of women in the tech industry have been accused of being too aggressive. When the great majority of women have been called the same name, that's a surefire sign that there's a problem beyond the actions of the women themselves.

Because of all these stigmas against outspoken, opinionated women, many woman are understandably afraid of coming off aggressive, shrill, or bossy. So, they might tone it down, speak more softly, apologize, and use qualifiers. Then, they are accused of being too passive and apologetic. Women are caught in a double bind, so instead of criticizing them for not speaking up, we should really focus on improving our own ability to listen to them.

When women exhibit verbal habits like uptalk and saying "like" a lot, it may be tempting to view this as another way women undercut themselves. However, "Valley girl" speak isn't all about being passive or sounding unintelligent. According to research presented at the Acoustical Society of America, the majority of women's uses of uptalk are actually for the purposes of holding the floor and making sure nobody interrupts them. In addition, employing qualifiers like "like" can be a way of connecting with listeners, linguist Robin Lakoff told New York Magazine. Before criticizing the way women talk, maybe we should be questioning the way we interpret them.

More like this
Black Women's Equal Pay Day Highlights An Upsetting Problem
By Brandi Neal
How To Politely Reject Someone Who Keeps Asking You Out
By Laken Howard and Lexi Inks
Romance Authors Are Mobilizing For Reproductive Rights
By Natalia Perez-Gonzalez
Here’s Your Daily Horoscope For October 3, 2022
By Mecca Woods
Get Even More From Bustle — Sign Up For The Newsletter