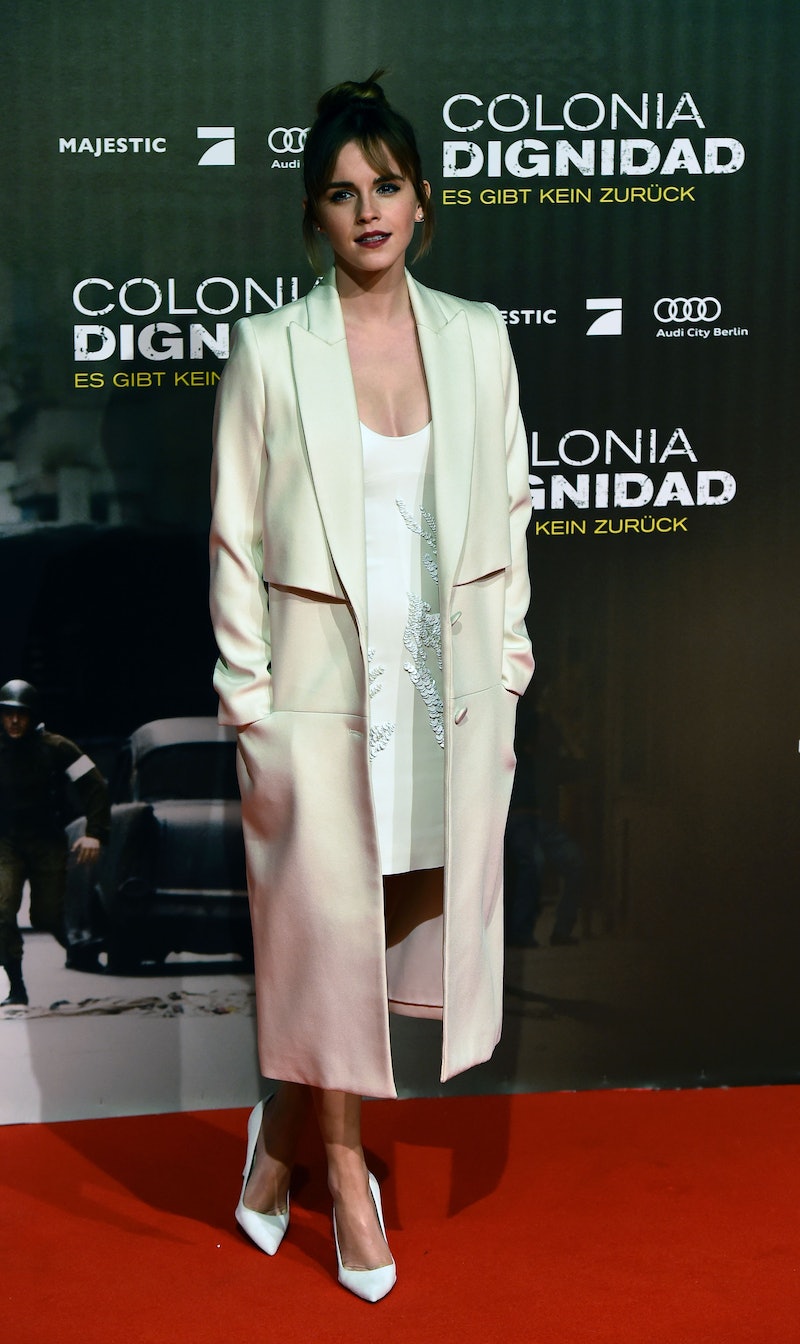 Among the celebrities who can include "beauty role model" in their long lists of qualifications is actor Emma Watson, feminist and Goodwill Ambassador. She wowed us a few years ago with her bold Mia Farrow-esque haircut after years of playing Hermione Granger with curly, long locks, and just last month, she rocked the cutest bob. Now it's Emma Watson's bangs that are making her a hair icon yet again. During her years in the spotlight, she's changed things up every few months with a new cut or style. But this time, Hermione Granger certainly doesn't seem like her inspiration.

Granted, Watson rocked bangs through much of her childhood on the Harry Potter set, accented by long and wavy hair. It was certainly her longest-running look, since she basically had bangs from ages 11 to 18. According to Refinery29, her new bangs (which accent a bob) were taken for a night out on the town for the first time two days ago at the Berlin premiere of Colonia (Watson's latest movie). It's been about six years since we've seen the actress rocking some serious bangs. But it's already clear that she's taking a more grown-up approach to the look this second time around. Here we see Watson rocking the classic top knot with this look.

Forever a hair innovator, Watson has opted for the wispier look over a blunt bang going straight across, reclaiming the bangs from her childhood in a way that is both sophisticated and sexy. From what I've observed, top knots are normally paired with sleek fronts and without any fringe. However, Watson proves that her bangs belong just where they are — unclipped and a little messy — in the presence of that top knot. I sense a new hair trend coming on.

The actor is certainly not new to setting hair trends, though, and has been doing so for many years. Here are some of the cutest looks she's ever sported, all of which have inspired us to take new chances with our own manes.

Just last month, Watson debuted a new bob, straying from the long locks she had been growing out for some time. Her wavy and slightly messier take on the bob was super inspiring as well as accessible.

Watson is certainly a lover of the sleeker side of things, based on some of her red carpet looks. This up-do is super fierce and also perfect for channeling all the androgynous feels. My hair isn't long enough for this style, but seeing her rock it certainly inspires me to slick my mane back and throw on some red lipstick.

Watson isn't afraid to flex her long, flowing hair muscles either through a gorgeous, side-swept look. Her hair is so luscious and shiny.

Watson even reminds us of the value of a middle part and a low pony — two things I don't normally love. But, as expected, she makes both styles look highly covetable.

I'm feeling majorly inspired to change up my own 'do yet again. With Watson as inspiration, it's going to be pretty hard to settle on one look. But maybe I'll start with some bangs.

Want more hair-spiration? Check out the video below, and be sure to subscribe to Bustle's YouTube page for more!

More like this
Not Sure How To Style Bangs? Make These Easy Hairstyles Your Go-To
By Olivia Rose Ferreiro
How To Cut Your Own Bangs At Home Like A Professional Stylist
By Stephanie Montes and Audrey Noble
Florence Pugh’s Flipped Bob Is Giving ’60s Bombshell
By Olivia Rose Ferreiro
How To Get Wednesday's "Soft Goth" Lip, Straight From The Makeup Designer
By Audrey Noble
Get Even More From Bustle — Sign Up For The Newsletter